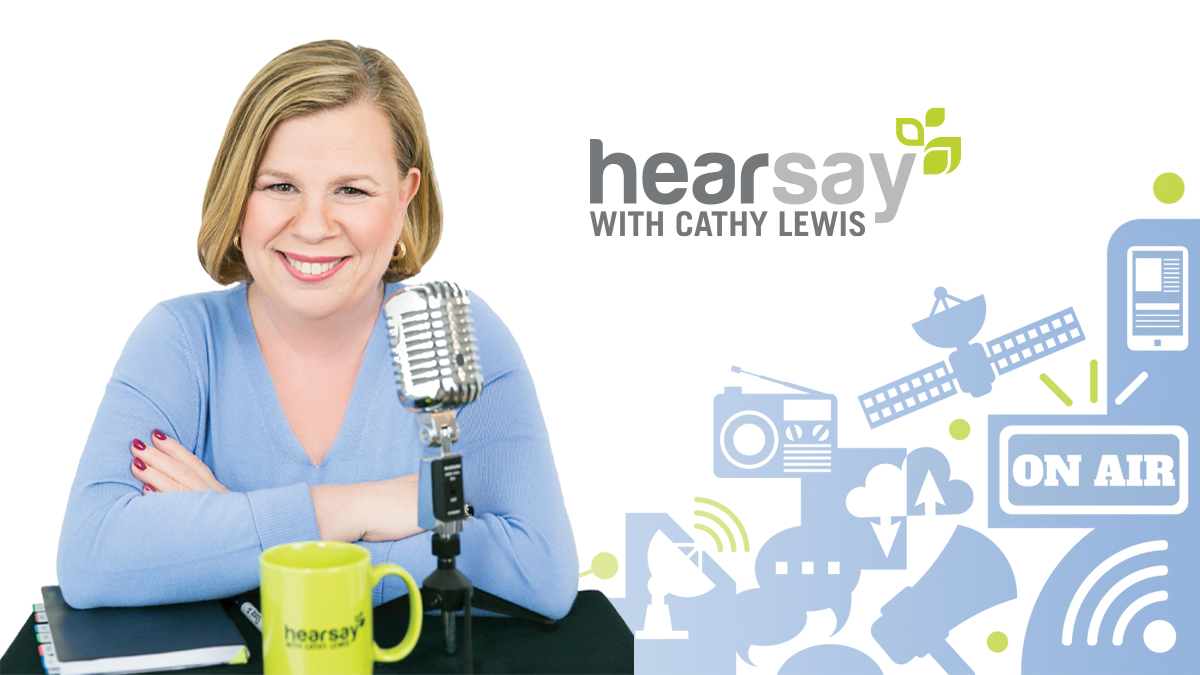 “In this extraordinary year that has us all a bit introspective, I’ve made a decision to turn this hour—and this microphone—over to someone else.”

For 25 years Cathy Lewis has hosted the popular public affairs program HearSay on WHRV FM. In that time, she has interviewed political candidates, governors, civic leaders, business owners and even former President Barack Obama. Frequently ranked among the region's top radio personalities, Lewis has also been named consistently to the Inside Business Power List, an annual roll call of the 75 most powerful people in the region. She is known as a champion of civil discourse, something she practices with guests and callers on every episode of her program. The beloved radio host recently announced she will be leaving the program at the end of this month to pursue other endeavors.

How did HearSay begin?

HearSay actually began as a limited-run experiment. Back in 1996, there was burgeoning interest in regional cooperation (spoiler alert: 25 years later, the region is working so much better together).

WHRV decided to do a one-week live radio series about different aspects of regionalism called Hampton Roads: What’s In It For Me? Producer Betty Luse asked if I would be interested in hosting that one week of shows and the rest is history: WHRV decided to add a daily call-in talk show to its lineup Monday through Friday at noon.

I read that you were producing and reporting for TV at age 19. Tell us about your journalistic roots.

I always tell aspiring media professionals that if you’re going to do an internship, you should do it in a place where they’ll actually let you “do news.” That was the case for me as a broadcast journalism student at Marshall University. In my junior year, I worked at WOWK-TV, the local ABC affiliate, reporting and helping produce weekend newscasts. One weekend they felt I was ready to do it on my own, (although I don’t recall anyone asking me if I thought I was ready!).

Back then, each reporter’s story was put on a separate video cartridge and the stack of cartridges had to be taken in order to a separate Master Control studio where they would be played when the director called for them. (“In order” is the operative phrase here.) Somehow, at about 10 minutes into the show, the wrong cartridge played, and it was a disastrous downhill domino run from there – wrong story after wrong story. As I contemplated my imminent firing, the director calmly pulled all the switches down, put up a “Technical Difficulties” slide, kicked his feet up, lit a cigarette (that was allowed in those days) and said, “Little lady, you just take a minute and figure out where we need to be. When you’re ready, I’m ready.” I was devastated, but that director knew that all I needed was one minute to figure things out. And I did. It’s a lesson I’ve never forgotten: when things get crazy, sometimes all you need is a minute to think and put the pieces in the right order.

How did you make the leap from TV to radio?

I had worked in radio in college, but I really wanted to work in television news. I was recruited to WAVY-TV in 1981 and spent seven really glorious years there with a tremendous group of people, many of whom are still working in local media today: Barbara Ciara, Don Slater, Bruce Rader and Don Roberts. In the late '80s, I decided to move into marketing and communications and one day I got that call from Betty Luse and I never looked back.

You’ve interviewed many fascinating people through the years. Who has been your most memorable guest?

Little Richard stands out for me. He was as lively and energetic in person as he is when you see him on TV. And he was very vulnerable and genuine. He had begun speaking out about his sense that he hadn’t been paid equitably for his musical contributions and his story was very compelling. He seemed to bring the same enthusiasm to my interview in Norfolk as I’d seen him bring to national interviews from New York City.

The conversations that stick with me most, though, are those where people really reveal themselves. Back in the late '90s, I remember a caller who said she was going home that weekend to tell her parents she was gay. She said she was scared about telling her truth and just wanted to say it out loud on the air before she faced her parents. I’ll never forget that because the audience was so supportive. I thought about her when marriage equality was legalized and we talked with Tony London and Tim Bostic, two of the plaintiffs in that Virginia case. I still think about that caller and hope she’s doing well.

Which episode—or maybe topic that the program has covered—has been your favorite?

It would be hard to choose a favorite. Certainly, our long-time recurring segments stand out: Gardening with Jim Orband and Pet Health with Dr. Phyllis Neumann. Their unfailing generosity and good cheer have been a constant source of joy.

There are two particular news moments I recall vividly: One was Hurricane Isabel in the fall of 2003. More than two-thirds of the region lost power, some for weeks. Just after the storm passed, we had a FEMA representative on the show talking about how ice was plentiful in the region and next thing I know, Newport News Mayor Joe Frank was on the line, telling the FEMA rep that what he’d just said was absolutely NOT true and his city needed ice and he expected FEMA to deliver that ice right away! We extended the show beyond our hour several days in the aftermath of that storm, connecting isolated people with emergency services and letting listeners know about road hazards and power updates. I think that response to Hurricane Isabel really helped ground WHRO in the strong commitment to local public service that carries on today.

The other news moment I remember clearly is the Virginia Tech shooting in 2007. We had just come on the air and there was a news bulletin that there’d been a shooting that was believed to be a domestic violence incident and there were injuries. We didn’t say anything to the audience at that point. About 15 minutes into the show, the producer messaged me that 1 or 2 people had died and at half past, she said there’d been more than 30 deaths. I was live on the air talking with guests and callers and texting the producer at the same time saying more than 30 deaths could not possibly be right and asking her to confirm. Moments later, she said AP had confirmed and then I knew we had to share that news with an audience undoubtedly comprised of hundreds of parents of Virginia Tech students. That was a very hard day.

But aside from news, the subject areas I feel most committed to revolve around social justice. The older I get, the less patient I am with inequity. Over 25 years, I’ve been privileged to engage in conversations at important points in the human journey, but there’s so much work to do to make sure we all have an opportunity to shape a more just world. I feel a great sense of urgency about convening people of good will who want to explore ways to make this corner of the world a better place for all of us.

What do you enjoy doing in your “spare” time?

In the immortal words of the Dowager Countess in Downton Abbey: “What is a weekend?” I serve on the Governor’s Commission on Higher Education Board Appointments and that’s something I feel very strongly about: making sure the commonwealth’s exceptional colleges and universities have the visionary and diverse leadership they need to meet the future. Recently, I’ve been privileged to serve on the COVID Task Force for the City of Norfolk and we’re working to clear barriers for those who want to get vaccinated. I’m also a member of the Board of Trustees for The Williams School, an independent school that was instrumental in shaping our daughter’s life. In fact, Anna was in kindergarten the year I started the show and she just turned 30, so she’s grown up right alongside HearSay! My husband and I enjoy taking Amtrak to visit her in Washington, D.C., and we love to travel to the British Isles whenever we get the chance.

You’ve hinted about what your next chapter looks like…can you provide us with any more details?

This last sequestered year has left me with plenty of time to ponder, and for a few years, I’ve had the sense I had one more act in me. It really has been the gift of a lifetime to be trusted with more than 5,500 hours on the air, and I know what a privilege that is. But I had two experiences during COVID that pointed to a possible path forward: I started a Facebook group called “Mask-Friendly Business in the 757” and thought it might attract 20 or 30 people who’d share the places they’d found that were taking the pandemic seriously. “20 or 30” turned into hundreds and I couldn’t keep up. Without my asking, six or seven people came forward and volunteered to moderate the page. Today it has 3,200 members and the moderators are doing an amazing job! In early March, I came across one of the earliest pharmacy links for vaccines and sent it to someone who’d been having a hard time getting an appointment. And then I thought there must be others who are having a hard time getting appointments. So I posted that if I came across opportunities, I’d share them. Before long, a Virginia Beach woman messaged me and said if I would post the offer, she would call the people and connect them to appointments. She’s been working 8–10 hours a day doing this work and she’s managed to get nearly 200 people signed up. And some of those people she signed up are also volunteering to get other people signed up.

Those experiences fueled a sense of urgency I feel about connecting a community of people hungry to be better and do better. And I’m working on creating some platforms and initiatives that bring people together and offer information, tools and encouragement to make change right here at home. And, just as I have for 25 years, I’m going to put it out there and see how it changes when shaped by others.

Before I take my leave, I want to express my gratitude to former President and CEO John Morison for taking a chance on this show. It was a brave thing to do when WHRO had very little in the way of regularly scheduled public affairs radio. We didn’t set the radio world on fire in that first weeklong experiment, but he stuck with it and I’ll be forever grateful.

And I want to thank my “last” President and CEO, Bert Schmidt. Bert walked in the door as a fan of the show and always supported our vision and ideas. When the occasional unhappy listener said, “I’m going to call your station manager!” I knew that if there was something to it, Bert would open a respectful conversation about it, but more often than not, he dealt with it and we never heard another word. He also honored faithfully the commitment he made never to interfere in editorial decisions. He never told us what to cover and what not to cover. That’s a disappearing commodity in the media landscape of today.

I’m not going far and will always have a special place in my heart for our public media stations. In a world that’s changing fast, it’s something we can hold on to and I am deeply grateful to have held on to it for the past 25 years.