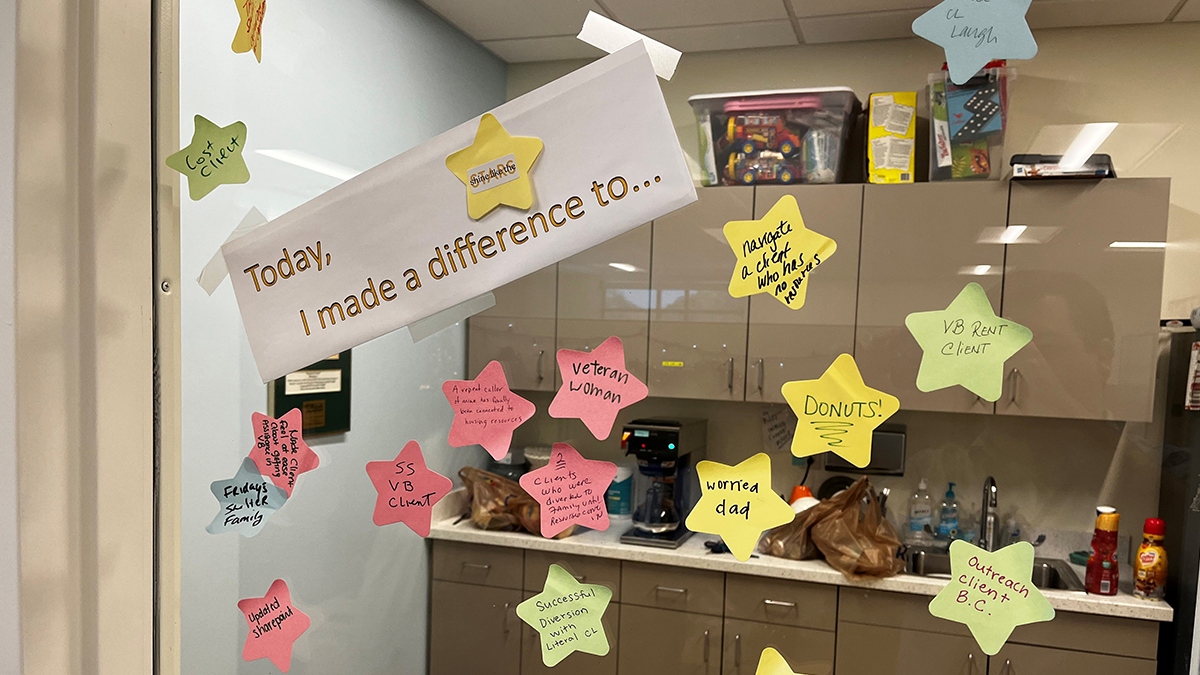 Photo by Ryan Murphy. The staff at Hampton Roads’ Housing Crisis Hotline list their wins on paper stars, a reminder that even though they can’t help most callers, they make a difference to those they do help.

One window in the office of the region’s Housing Crisis Hotline is covered in paper stars.

Each star has something written on it.

One says “worried dad.” Another, “veteran woman.” “Made caller laugh” is scrawled on a third.

Shirley Brackett, the director of the hotline, says it’s where her staff write their “wins.”

It’s a reference to the parable of the starfish washed up on the beach - a story about a person can’t save them all, but can make a difference to the ones they do throw back into the ocean.

Hampton Roads’ Housing Crisis Hotline has helped connect people in the region to resources for more than a decade.

Last month, the hotline fielded more calls than ever before - nearly 7,100.

But there aren’t 7,100 stars on the window. There are around two dozen.

That’s because while the calls seeking help are growing, the help that’s actually available is limited - and getting scarcer.

Brackett says the uptick in calls is partly because many pandemic-era housing aid programs have either recently ended - like the state’s pandemic rent relief program - or reverted to pre-pandemic eligibility rules.

“So now we're back to having very limited resources. And by very limited, I mean less than 100 people a month getting served through our community partners for rent out of those 7,000 phone calls,” Brackett.

The hotline itself doesn’t provide housing assistance. It keeps inventories of program waiting lists and resources to connect people to them.

And it’s not just the homeless or low-income families calling for help.

Brackett recalls one recent caller who makes more than $3,000 a month and still can’t find a place to rent.

“We have also run out of housing. There's just nothing available,” she said. “This is the new norm. This is people who are working, people who don't have bad credit. These are folks that have been priced out of the units they were in.”

She said she’s heard story after story of people whose leases weren’t renewed so a landlord could raise the rent and get a new tenant in at the increased price.

The region’s brutal housing market means the hotline’s getting more and more calls from families who make too much to qualify for state aid programs.

And Brackett expects that last month’s record-breaking call number will be broken again as the cold weather creeps in and heating bills start stacking up.

Thaler McCormick is the CEO of ForKids, the nonprofit that runs the hotline, among other housing and shelter services. She said she’s been tracking the underlying problems with housing for decades.

“The gap between housing and wages has widened out and widened out again,” McCormick said. “And this has just been really cranked up because of the pandemic where housing costs have escalated.”

Recent data analysis by WHRO found that, despite common misconceptions, Hampton Roads is less affordable than places like Raleigh or even the Washington D.C. suburbs when comparing housing prices to  average incomes.

A report by economists at Old Dominion University saw similar results, and points to the military’s higher pay and housing allowance as one of the reasons for the mismatch between wages and rents.

McCormick said the region’s cities need to start working together to address the lack of affordable housing. She points to success in other communities with affordable housing trust funds. The idea has cropped up in different ways in Hampton Roads cities, but needs to be done regionally to make an actual difference, McCormick said.

In the meantime, the call center phones keep ringing off their hooks.

“It's a tough job they're doing back there, which is being able to sit through a nine minute phone conversation to basically tell people ‘we have nothing available to help you with your problem right now,’” McCormick said.

Brackett, the hotline director, says her staff tries to celebrate every little win they can muster.

Still, fielding calls from struggling people with little to offer takes its toll.