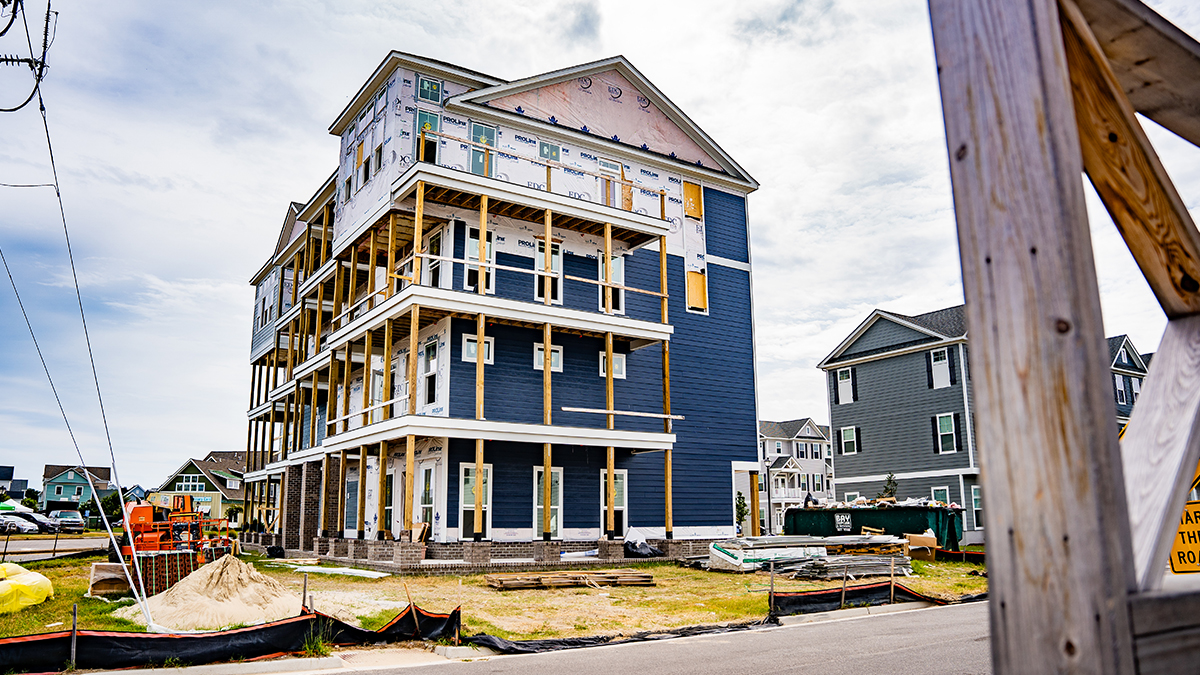 Photo by Cameron Houck. Hampton Roads has long had a reputation as an affordable alternative to Richmond or Northern Virginia. A WHRO data analysis shows the region is one of the most unaffordable in the state.

When Ryan Guenthner and his wife Melissa found out she was pregnant in early 2020, the couple knew they’d need to find a bigger home.

The two-bedroom apartment was already tight, with the couple caring for Melissa's two children from a previous relationship.

But the rental market in Hampton Roads can be a brutal place.

They kept at it for months, eventually moving in with Guenthner's father because it felt impossible to find somewhere they could afford.

Often, the couple never got past the rental application. Even when they found somewhere they could afford, Guenthner said they were regularly rejected over income requirements. It’s normal for landlords to require potential renters to make 2.5 times the monthly rent.

At the time, Guenthner was a graduate student. Now, he's a teacher, but still says his income isn't enough to ensure his family can live and grow in Virginia Beach.

An analysis of housing and income data by WHRO found Hampton Roads is less affordable for people living here than any other major metro area in Virginia - including the D.C. suburbs.

It’s even less affordable than similarly sized metro areas on the East Coast.

Cities becoming known for tight housing markets like Charlotte and Raleigh are still more affordable than Hampton Roads, along with other cities like Baltimore and Jacksonville.

You’ve got to go to famously expensive Silicon Valley, San Jose specifically, to find a similarly-sized area that is less affordable than Hampton Roads.

WHRO picked five metro areas to compare Hampton Roads data to based primarily on population. We picked some popular cities, known for having tough housing markets and with a range of local industries (like Nashville's music scene and Raleigh's tech industry). WHRO picked Jacksonville, Fla. because of its similar population size and large military installation.

But what exactly do we mean when we say “affordable?”

The U.S. government says people shouldn’t spend more than 30% of their income on housing. Spend any more than that, and you’re considered “cost-burdened.”

More than a third of households in Hampton Roads meet that criteria.

And the region has been more cost-burdened than state and national averages for at least the last several decades.

While Hampton Roads remains more affordable than larger metro areas like Boston or Orlando,  it’s often not by much.

The core of the issue is the mismatch between the cost of housing and local wages.

For instance, housing is certainly more expensive in dollar amounts around Washington D.C. and in northern Virginia.

But wages in that area are high enough to offset the higher cost of housing, leaving fewer households stressed by paying their rent or mortgage.

That’s less likely to be the case in Hampton Roads.

McNabb and his colleagues at the Dragas Center for Economic Analysis and Policy recently looked at the same affordability question and data that WHRO did.

“Once you get past the surface story of ‘Hampton Roads is relatively cheap,’ when you compare that to income, it becomes more expensive” to live here compared to other areas, McNabb said.

He says the region needs not just more housing, but should be looking to denser housing to try to make a dent in prices.

ODU’s report also points to the military as one potential reason behind the wage-housing price mismatch.

On top of that, service members also get a Basic Allowance for Housing, a stipend meant to cover rent and utilities.

“...(R)eal estate and leasing professionals point to the BAH as a reference point for setting rents. For example, due to the number of military personnel that cycle through the region every few years, it is common for landlords to base their rent on the BAH for a particular rank,” ODU economists wrote.

Renters in Hampton Roads suffer the most stress from the disconnect between wages and rent.

More than half of the region’s renters are cost-burdened, higher again than most comparable metro areas, as well as the national and state rates.

Guenthner, the Virginia Beach school teacher, did eventually get a lucky break with a personal connection – a friend of a friend was renting out a home. They moved in right before the birth of their child in August 2020.

Two years later, Guenthner estimates 40% of his take-home pay goes toward rent. They, like many other renting families, hope someday soon to own their own home. But even with his wife set to become a special education teacher, Guenthner worries their combined income still won’t be enough to keep living where they work.

“The income, it's okay for rent. And we could live here and, you know, be frugal, which we try and do, for the most part anyway,” Guenthner said.