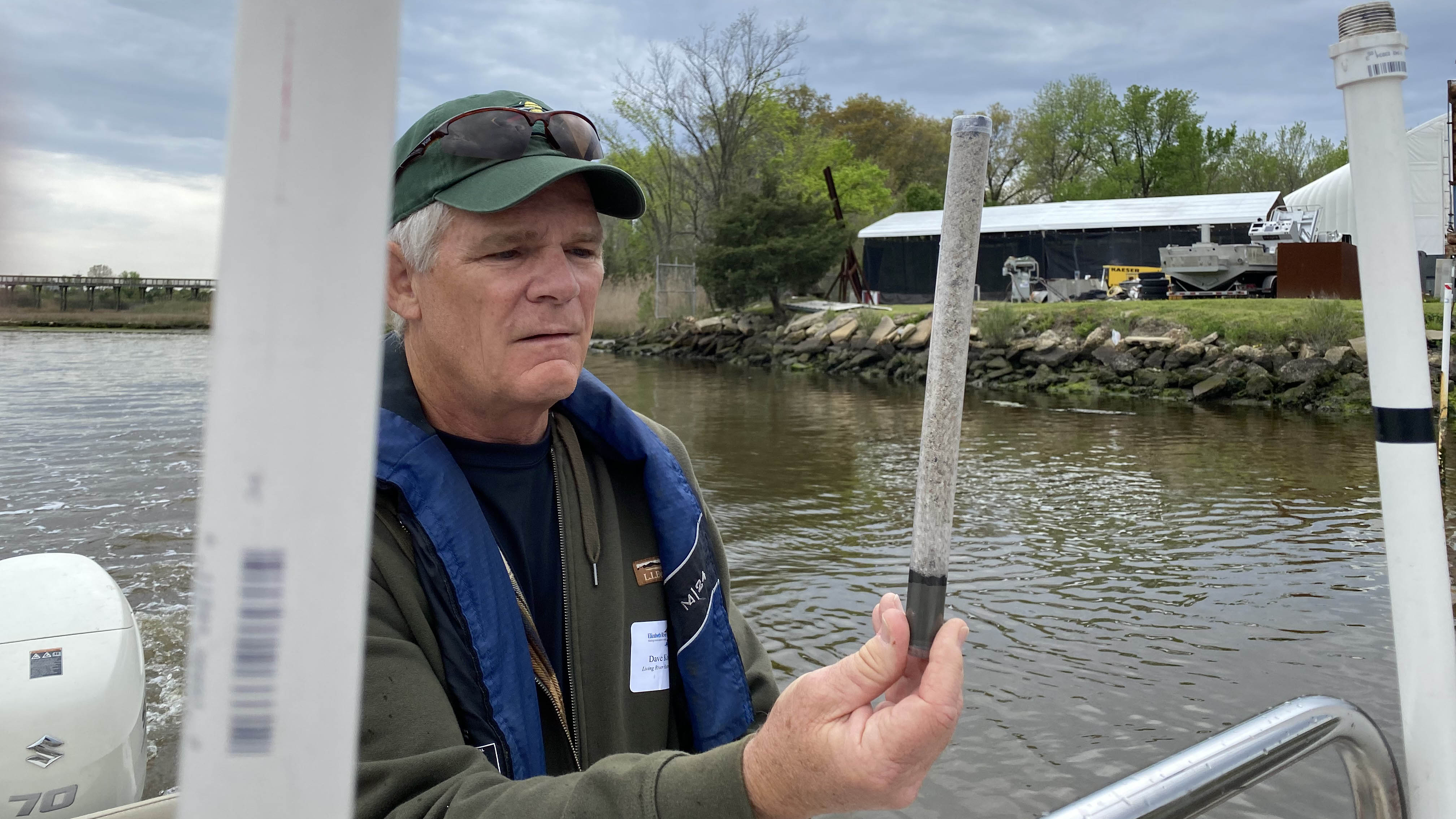 Photo by Katherine Hafner. Dave Koubsky of the Living River Trust holds a tube displaying what the bottom of Paradise Creek will look like after the cleanup project, on Tuesday, April 12, 2022. It includes a large layer of new, clean sand followed by a layer of activated carbon to absorb lingering chemicals in old, contaminated sediment beneath.

For centuries, industrial enterprises set up shop along the banks of the Elizabeth River, many feeding local shipbuilding by making tar-based creosote to preserve wood.

These substances easily found their way into the river and its tributaries, polluting the water with chemicals harmful for humans and marine creatures.

Paradise Creek in Portsmouth is one of those waterways. Situated along the Elizabeth River’s Southern Branch, the creek also served as a dumping ground for the nearby Norfolk Naval Shipyard during the two world wars.

Leftover pollution from that history still remains. Though not as polluted as other sections of the river, officials have found toxic chemicals called PCBs in Paradise Creek. They were used in all sorts of industrial products through 1979 when the U.S. banned them.

Local environmental groups have been working for years to clean up the Elizabeth River — and now the nonprofit Living River Trust is trying a new method to rid Paradise Creek of pollution. It’s the first major project to use the technique in Hampton Roads.

Last fall, the group began dredging up nearly 10 million pounds of contaminated sediment from the creek’s bottom. That’s about 350 large dump trucks’ worth that get disposed of in a specially approved landfill.

The roughly $6 million project doesn’t just mean removing all that sediment, though.

They place a layer of what’s called activated carbon – pellets of a charcoal-like substance – between remaining contaminated sediment and clean sand — “kind of like a sand sandwich,”  said Dave Koubsky, project manager with the Living River Trust

“It’s the same carbon if you have a home water filtration system or aquarium.”

PCBs are an organic material, which carbon absorbs much like a sponge, he said. The idea is that the carbon layer will act as a shield.

“Once you do that, the fish can’t ingest the PCBs anymore,” said Liz Friel, executive director of the trust. “It’s really pretty simple, but effective.”

The nonprofit will then be required to monitor how well the project works for up to the next decade after it’s completed later this summer.

“The Elizabeth River has 400 years of industrial history. … It’s one of the oldest working waterways in the country,” he said. “It was just common practice to use the rivers as the sewer system because there was no sewer system.

“Once regulations became in effect, people started to look and discovered some of the ills of the past and how they impact the environment.”

The PCBs that remain in Paradise Creek mostly affect fish and other critters. Creatures like clams and tubeworms burrow into the contaminated ground, then get eaten by fish and bring more chemicals into the water stream.

Blue crabs, for which residents often fish, are likely the most affected, Koubsky said.

The Living River Trust formed as a separate offshoot of the nonprofit Elizabeth River Project in the mid-2000s. It operates using what are called mitigation credits. Companies can or are sometimes required to buy them to offset the impact of their projects on the environment.

The trust’s first task was to take on mitigation funds from the APM Terminals in Norfolk. They used it to restore heavily-polluted Money Point in Chesapeake.

To learn about the nearby Paradise Creek Nature Park, check out this story from earlier this week about an expanding outdoor education center.