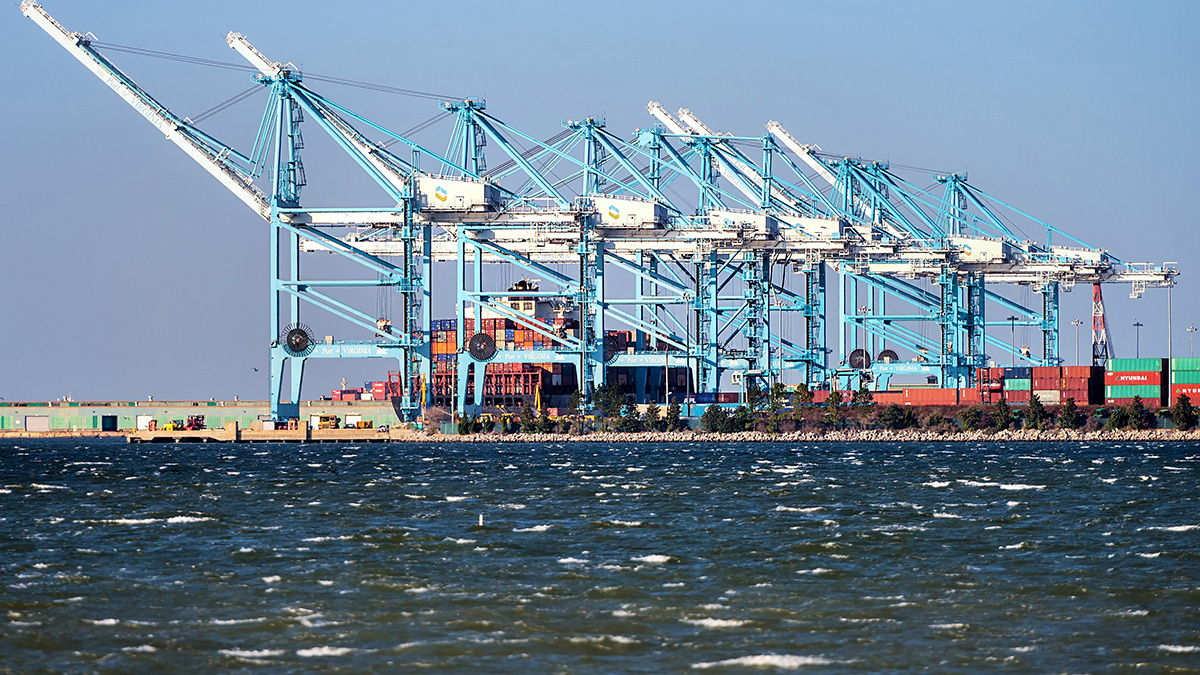 Photo by Bill Dickinson, Flickr. Siemens Gamesa, based in Spain, announced Monday it will lease space at the Port of Virginia’s Portsmouth Marine Terminal and hire more than 300 people to build and staff the new factory.

Hampton Roads will become the home of the U.S.’s first offshore wind turbine blade manufacturing facility, making the region a critical part of a nascent industry expected to be worth more than $100 billion over the next decade.

Siemens Gamesa, based in Spain, announced Monday it will lease space at the Port of Virginia’s Portsmouth Marine Terminal and hire more than 300 people to build and staff the new factory.

Until now, wind turbine developers have manufactured blades in Europe before shipping them to America. The new facility will specialize in completing the final stages of Siemens Gamesa’s blade production process.

The blades will be part of about 200 wind turbines Dominion Energy plans to install off Virginia Beach by 2026. Siemens Gamesa officials said the factory could ultimately produce blades for future offshore wind farms around the U.S.

“It’s a historic announcement for Siemens,” Steve Dayney, the company’s head for offshore wind in North America, said at a news conference in Portsmouth alongside dozens of federal, state and local officials. “We’re one step closer to the United States becoming a global offshore leader.”

The federal government is currently reviewing Dominion Energy’s plan for the wind farm off Virginia’s coast. If officials approve the $8 billion project, Dominion says it will be the U.S.’s largest offshore wind farm — big enough to power 660,000 homes.

“We did not get here by accident,” Gov. Ralph Northam said, noting that Virginia is also committed to producing 5.2 gigawatts of wind power by 2034. “We have planned and worked hard to lay the foundation for offshore wind and position Virginia as a leader.”

Wind turbines are massive pieces of equipment — their rotor diameter can be longer than a football field — mostly assembled in port before shipped out to sea for installation.

With most parts currently produced in Europe, the Department of Energy has said the U.S. needs several of its own factories to meet Biden’s offshore wind goals. That’s set off a race among East Coast cities vying to become manufacturing hubs for the potentially lucrative offshore wind industry.

Although Siemens Gamesa’s facility will not supply blades for other already-planned offshore wind projects around the mid-Atlantic and Northeast, the new Portsmouth facility is a major win for Virginia.

Few other are U.S. cities are involved in wind farm production — a steel yard in Baltimore will fabricate wind turbine foundations, and Charleston will produce the undersea transmission cables that connect windfarms to the electrical grid.

Hampton Roads will also be the home of a specialized ship that Dominion’s building to install wind turbines off Virginia Beach and elsewhere around the East Coast.

“Just as Pittsburgh became synonymous with America’s steel industry in an earlier area and Silicon Valley is synonymous with advanced technology today,” Dominio CEO Robert Blue said, “Hampton Roads can become synonymous not only with the maritime industry, but now with offshore wind.”

Siemens Gamesa and other offshore wind manufacturers previously expressed hesitancy about moving operations to the U.S. because they’ve yet to see a deep pipeline of approved windfarm projects off American waters.

The Biden administration appeared to respond to that concern earlier in October by announcing a plan to develop large-scale wind farms along nearly the entire coastline of the U.S.

Dayney, the company’s lead for North America, credited the Port of Virginia’s deepwater channels, land availability and technological capabilities in its decision to build the facility.

“This is the start of what we see as an industrial ecosystem surrounding offshore wind,” U.S. Energy Sec. Jennifer Granholm said. “Right now, all those jobs are overseas, largely in Europe. There is no reason why those facilities should not be here.”

Granholm and Northam guaranteed local residents will fill jobs at the new Portsmouth facility. And officials with Dominion and Siemens Gamesa said their positions would pay fair wages — although they would not say what the range of those wages would be.

“Offshore wind energy is going to create ripples of job creation,” Granholm said. “So it could be very sophisticated jobs for engineering people who need advanced degrees… But it could also be jobs for skilled tradespeople, and you don’t need to have a college degree.”