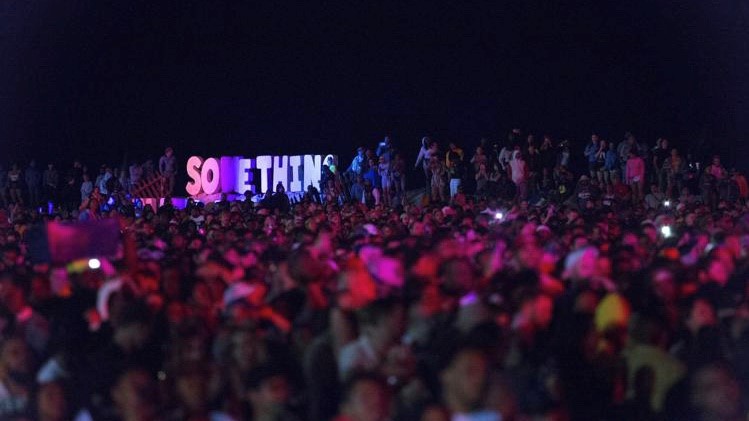 A view of the crowd after dark at Something in the Water in 2019. Photo by Ryan Murphy

Fans of the festival have a different name for that “toxic energy.” It’s racism that drove Pharrell away, they said.

“Everyone knew that’s what it meant,” said Christopher Rudder, who lived in the area for 20 years and was looking forward to the festival when it was held again.

“It's only now that the city leaders … when they see that this is him pulling back, that they're trying to do something different or make a change,” Rudder said. “And so it's really about, hey, our money is not as welcomed, (and) when it comes down to our issues, our Black issues, that's a problem.”

Something in the Water debuted in 2019 as a kind of replacement to the popular College Beach Weekend.

And before College Beach Weekend, there was Greekfest, a popular weekend-long event for historically Black colleges to spend time at Virginia Beach’s Oceanfront.

In 1989, the weekend dissolved into high tensions between visitors and police, leading to violence, arrests and riots.

It marred the reputation of College Beach Weekend, which was typically attended by Black college-aged visitors and often was a weekend of disruptive traffic and high-profile crimes (though not more crimes than other holiday weekends in the city).

“It was a abrasive and it really launched things in a dark way for a long time to where you see now people avoid Virginia Beach a lot of times for that kind of fun,” Rudder said.

And then came Something in the Water.

“Something in the Water made an enormous impact on Virginia Beach and catapulted the city into the national and international spotlight. Positive messages of inclusivity and togetherness were heard, seen and - most importantly - felt,” city manager Patrick Duhaney wrote in an email to Williams at the end of September.

Plus, the festival brought in more than $24 million, according to Duhaney, who wasn’t in his position at the time of the festival.

“We achieved those things!” Williams wrote. “I wish the same energy I’ve felt from Virginia Beach leadership upon losing the festival would have been similarly channeled following the loss of my relative’s life.”

Williams was referring to Donovon Lynch, his cousin. Lynch was fatally shot by a Virginia Beach police officer in March.

Initially, police said Lynch was armed. Then they said there was no evidence a gun found near Lynch belonged to the 25-year-old.

In a July legal filing, lawyers for the city said Lynch pointed a gun at the officer who killed him.

Williams said “toxic energy” in the city caused the changing narrative around his cousin’s death and was one of the reasons Something in the Water wouldn’t come back to Virginia Beach.

While Williams didn’t explicitly call out racism in the city, fans of the festival did.

"Let's not forget, because we do not have short term memory, how most of the restaurants and businesses on the strip were shut down doing (the) Something in the Water music festival," said Charmaine Cannon, who runs a Facebook group of more than 16,000 festival fans. "The doors were closed. We knew we weren't welcomed."

Hear more from Cannon below:

Xiomara Fernandez said attending the festival was magical for her. She got emotional talking about the cancellation but said she supports what Pharrell is doing.

"How are you going to do business with a Black man and then turn around and and not recognize the issue of Black people?" she asked.

Fernandez , who is from Richmond, said Virginia Beach has a reputation outside Hampton Roads.

"It's no secret that they need to take care of the racial atmosphere."

Hear more from Fernandez below:

"I think the city of Virginia Beach has squandered a wonderful opportunity to impact our city culturally, socially and economically, because of the inability to confront the reality of life in front of us," he wrote. "I just don’t understand how our city can consistently say we are “moving forward” and that we “embrace diversity and equity” and that we are “open for business” when so many of our collective decisions prove otherwise."

Mechelle Hankerson and Jonah Grinkewitz contributed to this report.