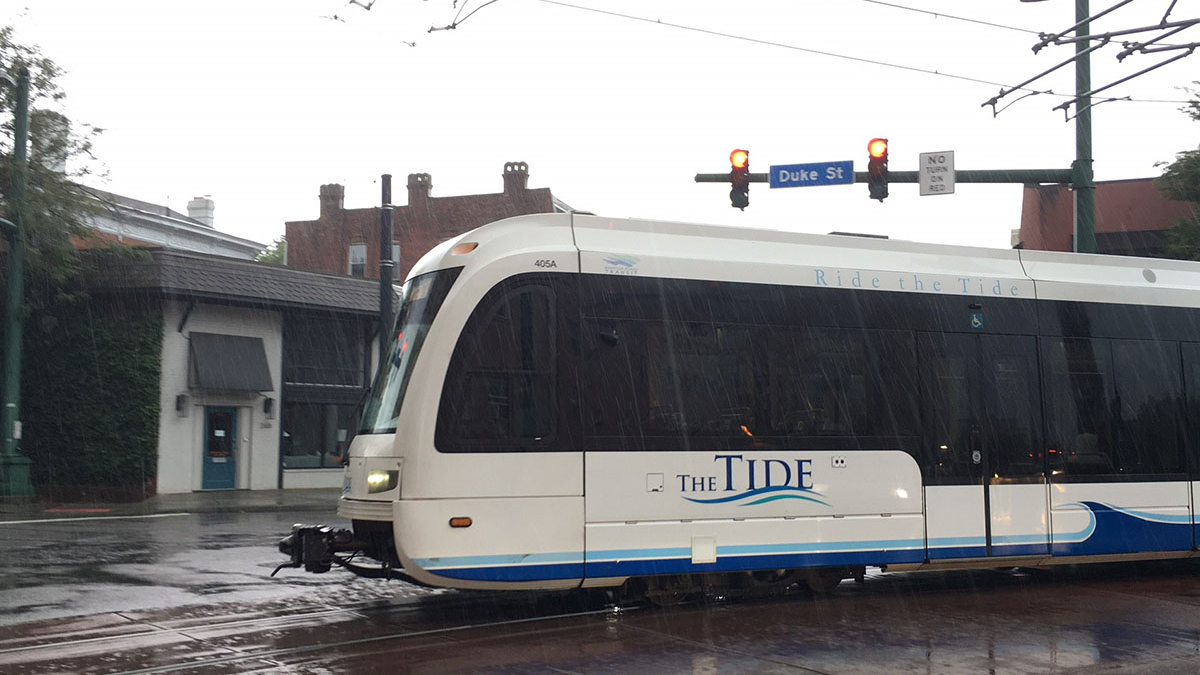 The Tide light rail in Norfolk is 10 years old this week.

Operator Hampton Roads Transit is now eyeing what would be the line’s first expansion: a potential two-stop extension to Military Circle.

For the past decade, the 7.4-mile starter line has rumbled through Norfolk, from EVMS and downtown, past Norfolk State University and out to the Virginia Beach city line.

Hampton Roads Transit, or HRT, aimed to connect it to other major destinations across the Southside, but expansion efforts were stymied over the last decade.

Virginia Beach voters overwhelmingly rejected an extension to the Oceanfront in 2016. Then came plans to connect the Tide to the region’s largest employer, Naval Station Norfolk.

The first stab - a route along Norfolk’s west side, past Ghent and Old Dominion University - proved to be too costly and difficult to construct. The focus shifted in 2018 to a route along the city’s east side to find a way to get to the world’s largest naval base.

Now, HRT President and CEO William Harrell said early-stage planning work has begun on a short spur from the current end point at Newtown Road up to Military Circle, which is a target for major potential redevelopment in the coming years.

“We believe, and I think the City of Norfolk believes, that that should be the first step as we look to how we serve Naval Station Norfolk,” Harrell said in an interview last week.

Planning documents show the Military Circle run as a potential first phase of a multi-phase Tide extension that connects Norfolk International Airport and eventually the naval base. But Harrell said they’re still studying the larger extension and whether, for instance, some kind of rapid bus network would work better to make the last leg to the base.

The plan for the Military Circle extension is in the very early phases. HRT just got federal approval to proceed with an environmental study of the route, which is necessary for outlining more comprehensive building plans. The environmental work alone could take up to a year and a half.

But if it proves feasible, said the extension would dovetail with the Military Circle redevelopment plans recently unveiled by the City of Norfolk, which include major entertainment venues and dense mixed-use developments.

Harrell says early estimates put the cost of such an extension around $225 million. There would likely be federal and state money HRT could go after to fund at least part of that.

Chesapeake requested an examination of a possible route south along the Military Highway corridor.

The idea is to connect Greenbrier and especially the Summit Point development, where Dollar Tree’s headquarters is located.

“So we see that is very important because obviously the tide is a regional asset. It certainly will be a stronger regional asset as we serve other communities beyond the city of Norfolk,” Harrell said. “And that obviously could help support an extension to Naval Station Norfolk too, because not only would you be drawing from Norfolk, but also Chesapeake.”

Ridership has ebbed and flowed since the Tide started operating, but ahead of the pandemic they were averaging around 4,600 daily rides, where it had more or less settled over the decade since the rail line started running.

The pandemic sliced ridership by more than half, as many people worked from home or avoided public transit. Ridership figures for 2021 still hover around half of the pre-pandemic numbers.