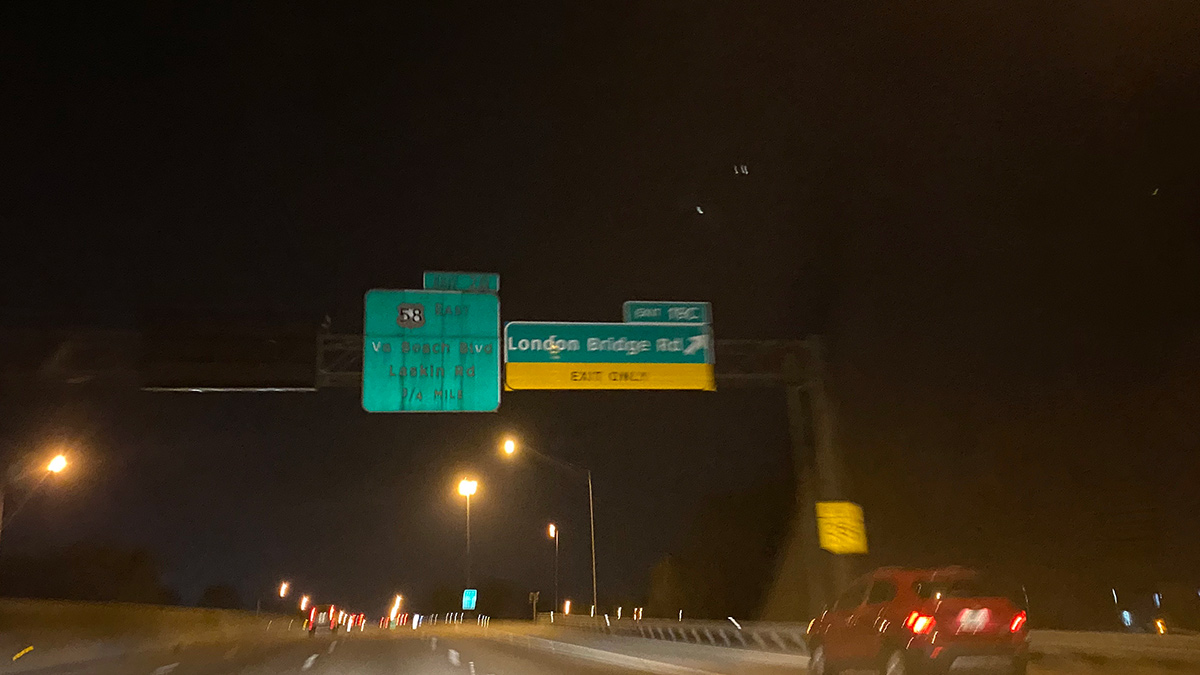 Photo by Sam Turken, WHRO. A stretch of I-264 East from Norfolk to Virginia Beach includes several signs that are difficult to see at night.

Invisible Signs: What's Going On With The Highway Signage Around Hampton Roads?

Drivers around Hampton Roads have to put up with a lot. Traffic and flooding, obviously. Birds flying around bridges. And what about those green highway signs that are fading?

Residents around the region say they struggle to see them at night. The signs aren’t just annoying. They have a real impact on people’s lives.

I quickly noticed the signs when I moved up to the area from Miami about a year ago. Many of them didn’t seem to reflect in darkness, almost like they were wearing out. I had never seen traffic signs like that before.

At the time, I used Google Maps for directions. But once the sun set, the signs still made it hard to distinguish exits.

I’ve since been waiting for them to be replaced. Some have, but a lot of them are still posted on expressways.

For example, I-264 East between Norfolk and Virginia Beach has a stretch of about six signs around Exit 19 that are barely legible at night. On one sign reading “Lynnhaven Parkway,” only a few letters shine in car lights from a short distance away. Two other signs are completely dark and don’t reflect at all as you drive past them.

“Those signs are terrible,” says David Falkinson, a Norfolk resident. “I mean the signs in the whole area are really bad.”

Falkinson is originally from the Boston area, where he says highway signs can also be confusing. But the ones in Hampton Roads are worse, he says.

“They’re definitely dangerous,” he says, while holding his 6-month-old daughter. “If it wasn’t for Google Maps telling me where to go, I’d probably get lost.”

There was that one day when he was heading to a movie theater in Chesapeake and his lane divided into three roads.

“I was supposed to go left but it was unclear which road was which so I went straight and it added almost 10 minutes to my drive,” he says.

The Virginia Department of Transportation oversees the traffic signs. A VDOT spokeswoman says safety is the agency's top priority and workers started replacing about 300 old signs in Hampton Roads in 2019. The process takes a while because it involves designing new signs and then bringing in cranes and closing down roads to install them.

So far, more than 80 signs have been replaced. The work is slated to be done by early next year. Until then, the spokeswoman says drivers should rely on “the redundancy in highway signage” to decide which exit to take.

The new signs are a relief for Norfolk resident Jacy Paloma, who says clear signage is especially important for all of the tourists and military members visiting Hampton Roads.

“They don’t know where they’re going,” she says. “And then if you miss an exit, road-rage — I don’t know how people react. Especially in a time that’s already like extremely frustrating, I think it could be dangerous.”

Paloma, who's a lab scientist at the Children’s Hospital of the King’s Daughters in Norfolk, adds she’ll also benefit from the new signs. The old ones have made her late for work.

“I just started wearing glasses too,” she says. “I miss a lot of exits sometimes. I’m not very directionally-coordinated.”