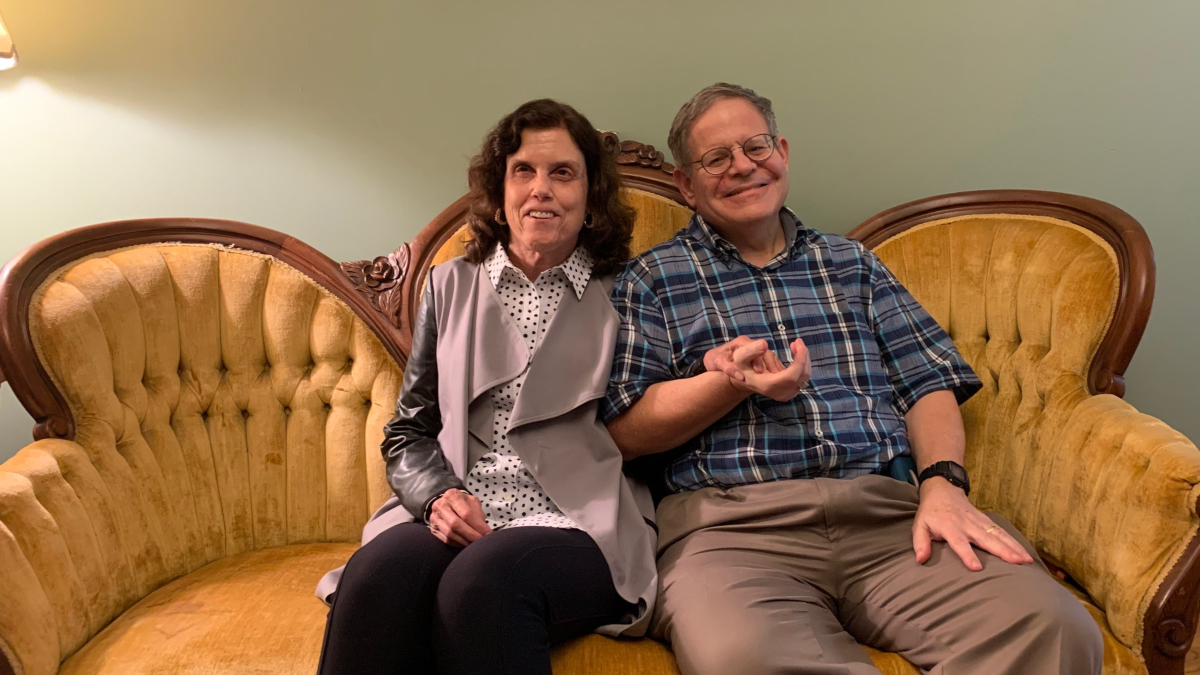 Photo by Gina Gambony/WHRO. Deborah (left) and Stewart Prost live in Norfolk's Ghent neighborhood. Part of the appeal of this neighborhood for the couple is its walkability.

Technology Not Always In Step With Accessibility

Most people are familiar with a very common piece of technology used by blind people — the white cane. It even has its own day, White Cane Awareness Day, which has been observed every October 15th since 1964.

The cane hasn’t changed much in its design and function over the years, although, some are now foldable and made of lighter-weight materials. What has changed significantly over the decades is digital technology.

New versions of technological gadgets for the sighted community come out every year like clockwork. But that doesn’t immediately transfer into benefits for blind people.

Stewart Prost is the president of the Tidewater chapter of the National Federation of the Blind. He retired two years ago from the Office of Human Rights in Virginia's Department of Behavioral Health and Developmental Services.  He said technology has been a blessing and a curse.

“Technology has opened up a lot of stuff,” he said. “But then all of a sudden, it's like, every time somebody comes out with new software, the screen reader doesn't pick it up or the braille display doesn't pick it up.”

He said this can leave blind people behind.

Deborah Prost, Stewart's wife, just retired from teaching in Portsmouth and Chesapeake last year. They are both blind, and they rely on digital technology every day.

Deborah said that all companies don’t make accessible websites for the software she and Stewart use, like screen readers.

An accessible website would provide a description of the image.

Deborah’s favorite piece of technology is called the BrailleSense Polaris. It’s similar to a laptop, but without a screen. Instead of a keyboard, it has just a few keys and along the bottom, a collection of tiny buttons that move up and down. The tiny buttons create braille words.

Deborah has all kinds of important information inside this small, flat black box. Her budget, her calendar, entire books. To use it, her fingers flow back and forth across the top. It's a language that's entirely mysterious to a sighted person.

With this device, Deborah can write a note in braille and email it to a sighted person. The technology translates the message into alphabetic text. It translates incoming text messages into Braille.

It’s like a Rosetta Stone for digital communication between blind and sighted people.

As a retired teacher, Deborah knows how powerful a device like this can be for blind students. But there is another layer of accessibility to consider: economics.

Stewart said this technology is expensive and not easily available to all blind students.

“Unless you have a parent with a lot of money, or a school system that's willing to pick up the tab, that's an issue that a lot of parents have, is that their kids are not getting the latest technology,” he said. “And they're behind in that regard, because their peers have more accessibility.”

Sighted students have fallen behind without access to a computer or internet during the pandemic. Deborah’s accessible computer costs about 10 times as much as a new computer for a sighted person.

Until it becomes more affordable, a device like this remains out of reach for many people.

Gina Gambony met Stewart Prost through an unexpected meeting of four other members of the Tidewater chapter of the National Federation of the Blind. Hear about how Gambony's trip to get waffles turned into her fortuitous participation in "Meet the Blind" month here.