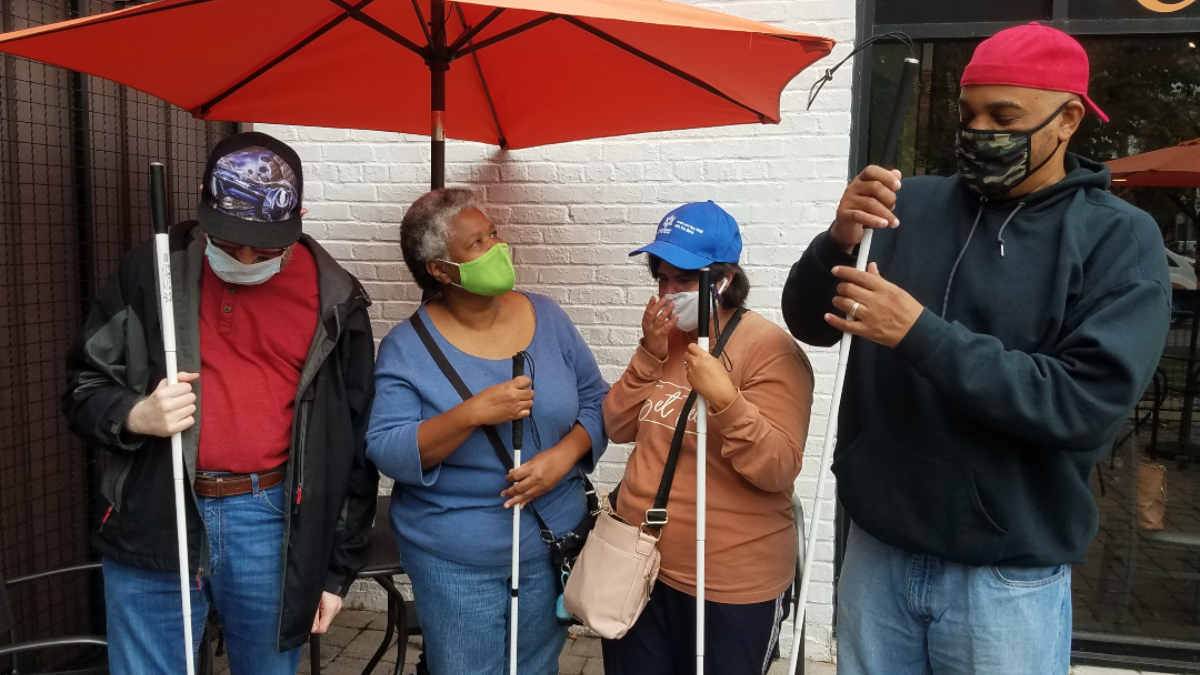 Photo by Gina Gambony/WHRO. A group from the Tidewater chapter of the National Federation of the Blind gathers under an umbrella at Colley Cafe. October is "Meet the Blind" month.

I’m generally pretty focused when I’m fetching a waffle. But when I walked in the Colley Café last Saturday, I was immediately distracted.

There was a group of four people at a table listening to something on a cell phone. There were two men and two women, two white and two Black, ranging in age from the early-30s to mid-50s.

They were all leaning in toward the cellphone at the center of the table. They were having fun, and seemed unaware of others in the cafe taking any notice.

I left at the same time the group was leaving, and I realized: They all had white canes, the ones used by people who are blind. The group let me hold the door, and as it turned out, my waffle had to wait. We ended up spending over an hour together.

I learned they were all members of the Tidewater chapter of the National Federation of the Blind of Virginia (NFBV).

One in the group, Earl Chapman, explained that they were having a conversation on the cellphone with members from other chapters of NFB around Hampton Roads. They were sharing their plans for the day and proclamations from Hampton Roads’ mayors that declared Thursday, Oct. 15, National White Cane Awareness Day. The entire month of October is “Meet the Blind” month, and groups all across Virginia were walking as a part of that this particular Saturday morning.

Another of the members, Jenny Blinsmon, said walking together shows the community, “Hey, we are just like you. We are out doing things just like you would.”

Blinsmon said some people are afraid to ask questions about blindness, but she loves to answer them because conversation is one of the best ways to learn.

I just happened to be in the right place at the right time to share conversation that morning at the Colley Café.

The white cane helps people who are blind or have limited vision feel their way around a room or outdoors. It's white to provide high visibility to others and send a signal to give right-of-way.

But I learned it is more than a tool. It's also a functional symbol of independence for the blind.

Blinsmon has been blind since birth. She says her cane is an extension of her left arm. It helps her feel changes in the ground, from pavement to grass or cobblestone.

“Speed bumps are very important to me, because they're landmarks.” Blinsmon said. “I used to live in an apartment building in San Diego and I had to cross the parking lot to get anywhere. If I didn't cross over three speed bumps to get to my building, I knew I was in trouble.”

René Rogers has been progressively losing her eyesight since she was a teenager. She said she was reluctant for a long time about using the cane because she was embarrassed.

She changed her mind after an incident at the mall.

“I walked into a clear, glass store,” Rogers said. “The wall was made of glass. Full stride. People thought I was drunk or on drugs or something.”

For her, accepting the cane meant accepting blindness. Now, she said she wishes she had done it sooner.

It’s not unusual to feel uncertain about how to act, or how to be helpful (or not) when meeting people carrying a white cane. I told my new friends how I felt when I first saw them in the Colley Café.

They laughed. And they weren’t angry about my preconceived notion that they would need help.

“A lot of people base us off what they see on television and in movies,” Chapman said. “They don’t know that the majority of us are independent.”

Chapman is in his 50s. He lost his eyesight 10 years ago due to diabetic retinopathy. He also lost his left leg.

He said before the coronavirus pandemic, he and other members of the Tidewater NFB chapter would gather once a month to see movies, go shopping and eat out.

Michael Kitchens has been part of this group for over a decade.

"For me, it means to realize that I'm not alone," he said.  "And that, you know, blindness isn't a thing to be be afraid of or ashamed of."

Kitchens said working and socializing with other blind people helps them all secure better opportunities.

It was a fortuitous opportunity for me to participate in "Meet the Blind" month, even if completely by chance.

And my waffle was no worse for the wait.

Gina Gambony walked with the group that Saturday, and they stopped at the home of Stewart Prost, president of the Tidewater NFB chapter. Gambony made a date to speak with Stewart and his wife, Deborah Prost, the following week. One topic they discussed was digital technology for blind people. Find that story here.