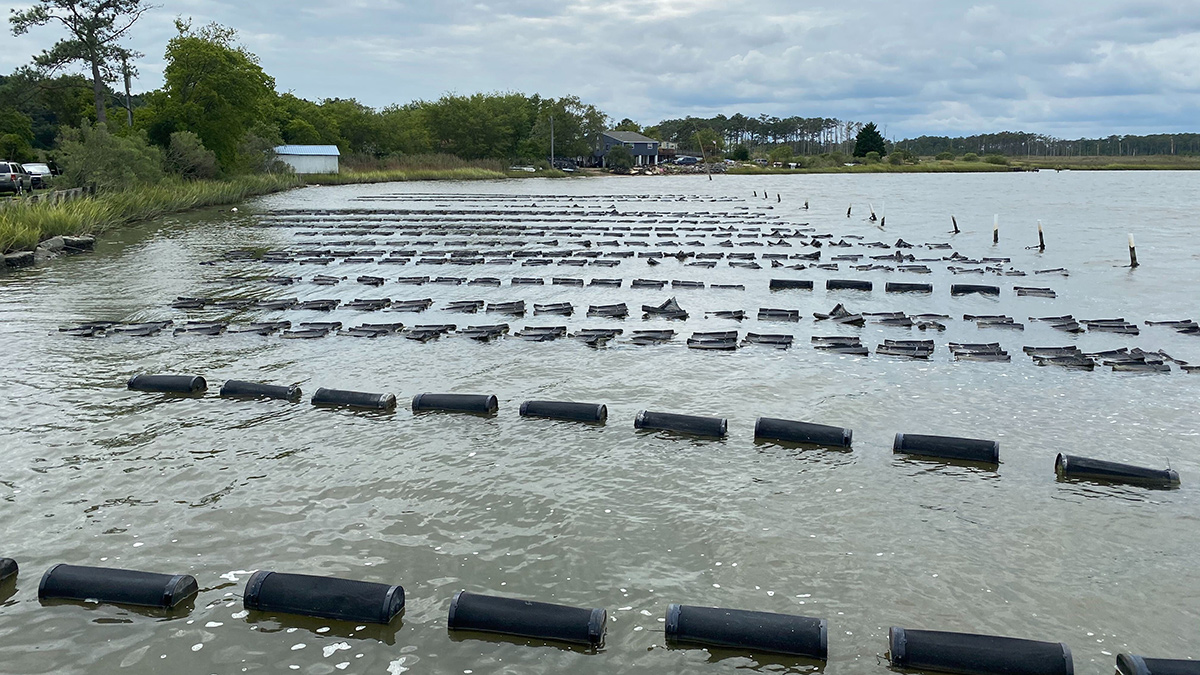 Photo by Sam Turken/WHRO. Algae can be toxic to oysters and other sea life.

He calls them the perfect animal and says they can help solve lots of problems. On Facebook, one of his recent posts advises people to eat oysters because they have nutrients that strengthen teeth. Another post says oysters can lift people's moods.

“Every homeowner that lives on the water should put some oyster cages under their docks and piers,” says Vogt, a Hampton Roads oyster farmer. “It’s great for the environment. You know every oyster filters 48 to 50 gallons of water a day.”

The shellfish are a great source of food as Earth’s population continues to grow, he adds.

But Vogt’s oysters are in danger. Polluted stormwater and runoff have fueled algae blooms across Hampton Roads this summer — including in the York River. Algae can be deadly to sea life.

Vogt, whose farm is near the York, lost hundreds of thousands of his oysters to a bloom several years ago. Now, he fears it can happen again.

“If you get a bloom and it kills your oysters, you have nothing to sell,” he says, noting it could put him out of business.

Vogt, 72, has been operating his company — Big Island Aquaculture — for the past decade. He previously worked in disaster restoration, helping cities respond to floods.

He started the oyster business, thinking it could be a good way to make some extra money in retirement and help the environment. He also wanted to help his youngest son, Daniel, who loves working with oysters.

“It was the perfect opportunity to put him in business,” he says.

Vogt’s farm is based in the backyard of his waterfront property in Gloucester County. Empty oyster shells are scattered around, and there’s a small mountain of hundreds of unused oyster cages. Out on the water, more black plastic traps sit in dozens of rows, bobbing in waves.

On a recent September afternoon, two of Vogt’s workers sort through hundreds of oysters on metal tables. Vogt walks over and inspects one oyster that’s about to go back in the water for another month.

“This is an oyster where another oyster has struck to it. So we’ll just break that off and put them back in and let it restore itself,” Vogt explains.

It’s been a difficult year for the oyster industry. The coronavirus pandemic has slashed Vogt’s revenue. Sales are beginning to increase now that restaurants have reopened. However, distributors are still buying fewer oysters than usual, and Vogt’s sales are currently at about half of what they were a year ago.

The last thing he needs now is an algae bloom threatening his oysters.

WHRO has previously reported how polluted stormwater and runoff that carry nutrients like nitrogen and phosphorus cause algae blooms. On land, fertilizer and manure help plants grow. When both substances flow off farms and streets into water bodies, they do the same for algae.

The blooms can be toxic to fish. And when algae die and decompose, bacteria break them down and suck up oxygen from the surrounding water, suffocating sea life. In recent weeks, algae blooms have caused fish kills across Hampton Roads.

Vogt says about five years ago, an algae bloom wiped out around 300,000 of his oysters.

“Basically it killed our sales that year. There’s nothing more depressing than pulling up a bag of oysters and 90 percent of them are dead,” he says.

Vogt now worries the bloom in the York River could do the same. He says the wind and tides could bring the algae to his farm.

“I’m typically a positive, optimist guy. You know, so far, we’re okay,” he says. “But that doesn’t mean you don’t stress and worry about it -- because I don’t know where it’s going. It can move.”

“From a business perspective, that would make sense,” he says. “You don’t want to put all your eggs in one basket.”