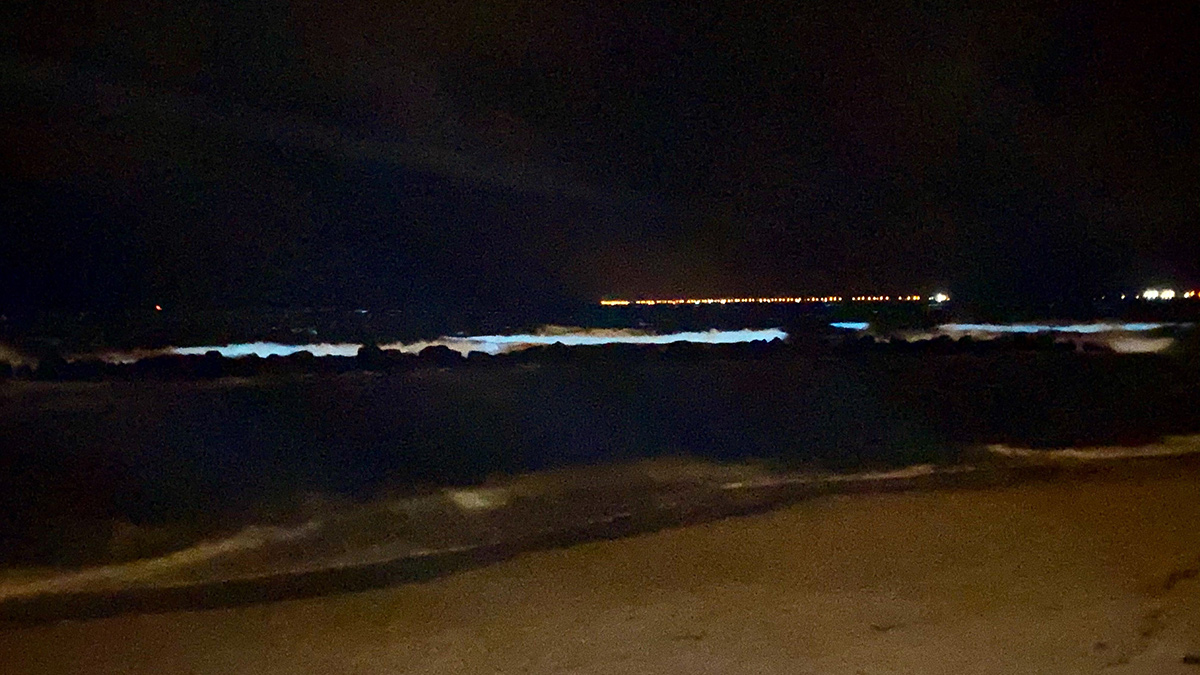 Photo by Sam Turken/WHRO. Bioluminescent algae around Ocean View Beach in Norfolk have made waves glow in the dark.

Margaret Mulholland stood on Ocean View Beach in Norfolk on a recent windy night. It was dark. Sand blew around. Beach grasses danced.

Mulholland — an oceanographer at Old Dominion University — watched the waves in the Chesapeake Bay crash over a line of rocks just off the beach. Then she noticed something unusual.

“With the waves breaking we’re seeing some bioluminescence in the water. And it’s making the waves appear [to] sort of have a bluish hue to them,” she said.

The waves were glowing in the dark. Billions of microscopic bioluminescent algae were in the water. When a wave disturbed them, they lit up like fireflies.

“They can be very spectacular to look at,” Mulholland said, noting they were part of a larger algae bloom. “They’re called Alexandrium Monilatum. We call them Alex.”

But as beautiful as they made the waves look, the algae were a bad sign for water quality around Hampton Roads and the Chesapeake Bay. Algae blooms are harmful to sea life and are an indicator for nutrient pollution.

Waters around Norfolk’s beaches have already suffered from fecal pollution that have prompted more than five swimming advisories throughout the summer. More recently, the bloom of bioluminescent algae developed around Ocean View extending up to Chic’s Beach in Virginia Beach. There was also a four-mile bloom in the York River earlier in September.

A different type of algae nicknamed Marge — short for Margalefidinium Polykrikoides — has also bloomed in the Lafayette River.

Both algae types are dangerous for marine ecosystems. They’re toxic to fish and shellfish. And when they die and decompose, bacteria break them down and suck up oxygen from the water. The process suffocates nearby fish.

“Crabs and some organisms that can move will try to avoid those waters,” Mulholland said. “And in the old days, they used to call it crab jubilee — when the crabs actually came out of the water because they were trying to breathe.”

The blooms have caused fish kills across Hampton Roads. Earlier in September, at least 40 dead fish were scattered around a boat ramp on the Lafayette River. The Virginia Department of Health recently reported another kill in Indian Creek around Hampton.

Polluted stormwater and runoff that carry nutrients like nitrogen and phosphorus fuel the blooms. On land, fertilizer and manure help plants grow. When such nutrient-rich substances flow off farms and streets into water bodies, they do the same for algae.

“Agricultural and even residential land will contribute to the nutrient load being added to the system,” said Kim Reece, who studies aquatic health with the Virginia Institute of Marine Science. “What people do to their lawns impacts our waterways.”

Stormwater leaks into water bodies in multiple ways. It can flow down streets, sidewalks and other impermeable surfaces directly into nearby rivers and streams. It can also drain through stormwater pipe systems underground. Many stormwater systems then release the untreated water into larger water bodies through outfall pipes.

Reece said climate change could now be exacerbating the stormwater and algae problem.

Stronger rainstorms are occurring because warmer air can hold more moisture in areas that tend to be wet. The result is more polluted stormwater rushing into water bodies, according to the U.S. Environmental Protection Agency. Even when it doesn’t rain, worsening tidal flooding due to sea level rise creates additional opportunities for nutrients to flow into rivers and creeks.

“It’s likely to stay around as temperatures are elevated in the Chesapeake Bay,” Reece said.

Virginia and five other states have been trying to cut pollution into the Chesapeake Bay and it’s connecting waterways.

In 2010, the EPA rolled out limits on the amount of nitrogen and phosphorus that could be discharged into the bay watershed. The states have since developed detailed plans to reduce nutrient runoff. They have until 2025 to meet their pollution-reduction targets.

A recent report on the bay cleanup by the nonprofit Chesapeake Bay Foundation found Virginia is on track to meet its goals and has made progress limiting nutrient flows from wastewater treatment plants — another major source of nitrogen pollution.

However, the commonwealth must do more to limit pollution from agriculture. Stormwater in urban and suburban areas with a lot of concrete and impermeable surfaces is also a growing problem.

In an interview, Chris Moore — a scientist with the Bay Foundation — said a lot of stormwater infrastructure is old and needs upgrades. He said cities must do a better job of treating and cleaning runoff before it’s released into waterways.

Localities should also build more wetlands and other green mechanisms to slow down runoff into rivers, he said. Stormwater retention ponds trap runoff and help separate phosphorus from the water.

The key, however, is finding money to pay for stormwater projects.

“Urban and suburban stormwater,” Moore said, “tends to be the most expensive and kind of the toughest nut to crack.”

Since 2014, Virginia has been operating a Stormwater Local Assistance Fund that helps localities pay for stormwater projects. But environmentalists say it hasn’t been enough.

The General Assembly is now reworking the budget in response to revenue shortfalls caused by the coronavirus pandemic. Scientists and environmentalists hope the state will maintain funding for pollution-reduction programs.

“If we don’t succeed in reducing our nutrient management load, we are going to see algae blooms more and more,” said Del. Nancy Guy, who represents Norfolk and Virginia Beach. “We cannot take our eye off this problem.”

In addition to funding, Kim Reece — the aquatic health scientist at the Virginia Institute of Marine Sciences — said Virginia should carry out a study of the stormwater management system. She said a task force should look at new statewide strategies to better monitor waters and keep them clean.

“We really need to get at this because we continue to have these blooms,” Reece said. “Much improvement needs to be made.”