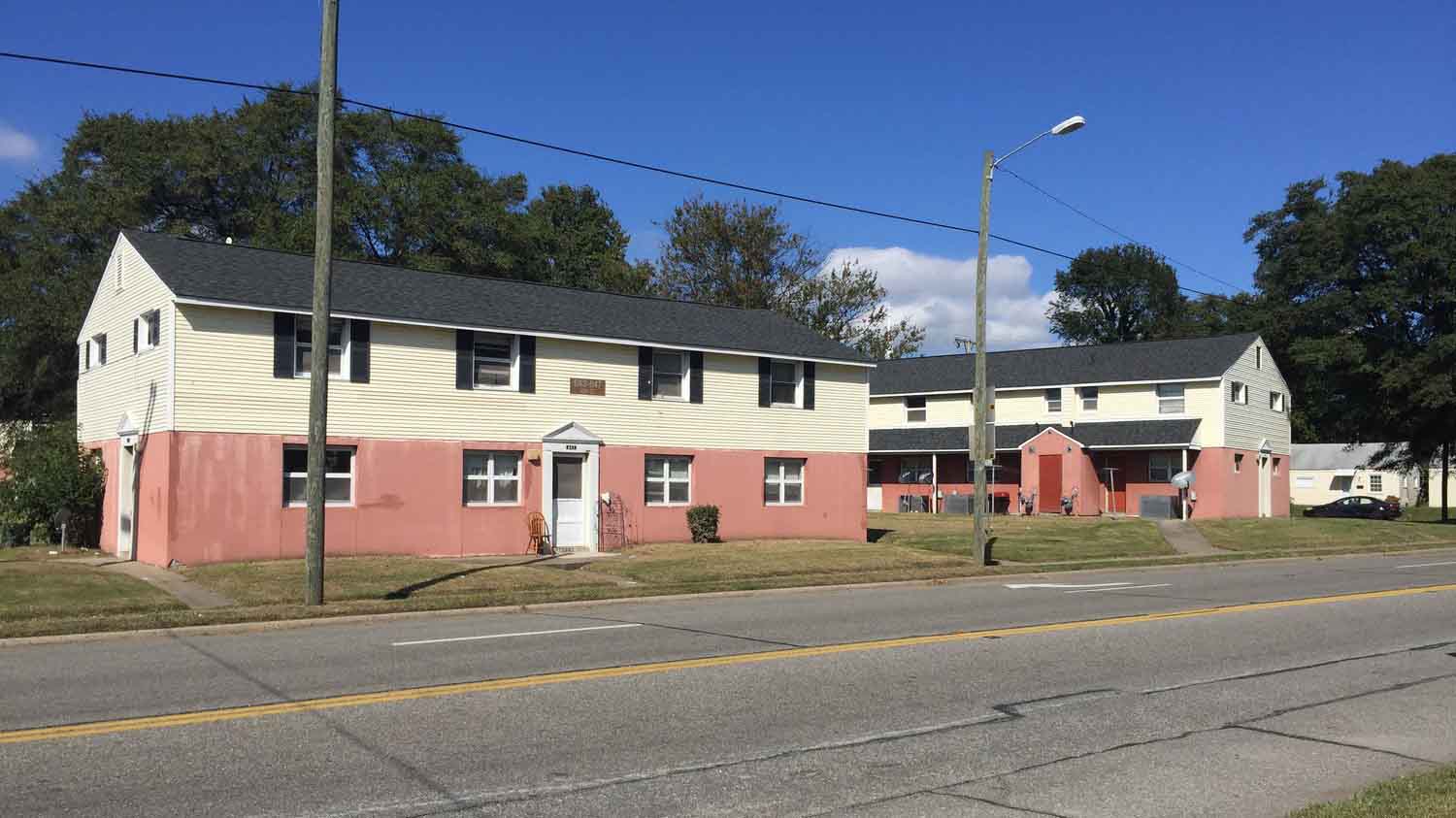 Ridley Place in Southeast Newport News was built in 1954. It's now part of a large-scale revitlaization plan for the area. Photo from www.newportnewschoice.com.

It’s in Southeast Newport News, a majority black neighborhood that has declined over decades.

The historic high school in the neighborhood that black students attended during segregation fell into disrepair and city officials only recently came up with a plan for it.

Marshall-Ridley is in the process of a $30 million federally funded revitalization project that includes rebuilding and replacing old subsidized housing and providing more neighborhood amenities, like educational facilities, parks and jobs.

The neighborhood’s current condition is not a reflection of residents’ dedication or care for it. It’s also not an accident.

Southeast Newport News, like many majority black communities, is still impacted by decades of formal and informal housing policy and practices that kept black people separate from white people.

And housing has far-reaching impacts because of its connection to tax value that determine how much education funding schools receive as well as other economic opportunities.

“Segregationist housing policies in the past really massively exacerbated economic inequality between racial groups,” said Johnny Finn, a Christopher Newport University professor who is researching housing patterns on the Peninsula.

“The economic inequality that was created by segregationist housing policies then feeds back into contemporary patterns, where particular racial groups have much lower levels of wealth,” he said.

“Because of past segregation policies, [black residents] are not able to buy into neighborhoods with higher housing values with higher home values that require larger down payments, and so on.”

Housing segregation was formally abolished in the Fair Housing Act of 1968, but homeowners had already been directed to certain neighborhoods for decades before through the practice of redlining -- determining an area was too risky for financing.

After the Great Depression, the U.S. government created the Home Owners' Loan Corporation through the Home Owners' Loan Act of 1933 to help people refinance their homes to avoid foreclosure. The agency rated neighborhoods from “highly desirable” to “hazardous.” If the rating was too low, homeowners wouldn't be approved for refinancing.

In paperwork from the time, it was clear places with more black residents were rated lower. It means many black homeowners didn’t qualify for refinancing and subsequently lost their home or their homes fell into disrepair because they didn't have the additional funds at their disposal to renovate.

Downtown Newport News, where Marshall-Ridley is, for example, was rated “hazardous.”

In Hampton, the historically black Phoebus neighborhood was rated “definitely declining,” just one level above the worst rating.

The practice of redlining was weakened after the Fair Housing Act of 1968 was passed. It was further discouraged after the Community Reinvestment Act in 1977. But even if the practice formally ended, its effects still ripple through many black communities.

Finn said most Americans build net worth through real estate. And many average people own one piece of real estate: the home they live in.

Making it easier for white people to acquire homes and harder for black people, or purposefully devaluing communities that black people were forced to buy in (as redlining did), creates an economic gap between the races.

Public housing projects were part of the New Deal after the Great Depression.

It wasn't for poor people, but a way to address a housing shortage, since private home construction wasn't happening. Plus, middle-class white families were losing homes because of unemployment.

Waiting lists for the black projects were long, while white projects often had vacancies.

As the economy started to recover, the federal government started helping developers secure funding for neighborhoods, many with rules only allowing white homeownership, thus creating suburbs in many places.

Now, government subsidized housing is meant to look more like its surroundings and in many cases, mix low and moderate-income residents.

Marshall-Ridley in Newport News is one place that is in the middle of such a transformation.

According to the redlining map Finn and his students made, federal housing officials rated the neighborhood red - “dangerous.” The data sheet noted “no pride of homeownership is evident,” but that most homes were owner-occupied. The sheet also noted 95% of residents in the area were black.

Plans for Marshall-Ridley now call for mixed-income housing (among other things) and keeping 50% of the redeveloped residences to remain affordable for “extremely low income residents.” In a survey conducted before creating the redevelopment plan, only 4% of Marshall-Ridley residents reported they make more than $20,000 a year.

“There's a lot of fear around the (Choice Neighborhood Implementation) plans in Norfolk and in Newport News,” Finn said. “It looks like the city will look better, the neighborhoods will look nicer, but it won't actually deal with the underlying racial and economic problems of inequality.”

Mixed-income housing is a response to the government’s past practice of building public housing, or projects. But it often means the number of affordable units is limited, which can lead to displacement.

In some cases, there are new requirements to access that mixed-income housing, like not having a criminal record, or qualifying for certain housing assistance programs.

In many cases, Finn said, government-funded revitalization projects do nothing more than gentrify an area.

Michael Bullock is a two-time homebuyer in Hampton.

Both times he went house-hunting, he said real estate agents steered him away from wealthy, white areas of the cities even though he could afford it.

“There are some places where the real estate agents, whether they're black or white, they won't take a black man like me,” he said. “They never took me down to Buckroe.”

The practice of “steering” is illegal under the Fair Housing Act of 1968.

Bullock, a Navy veteran, bought his first home off Settlers Landing Road. According to old rating maps, most of the area was rated the worst or second-worst.

“Here, crab meat and other shell fish are cooked in large quantities and especially in damp weather this gives rise to objectionable odors which are noticeable throughout the city,” a federal inspector wrote in 1940. “This is the poorest neighborhood in Hampton, houses the lowest income group and is generally old and obsolete.”

They noted the neighborhood was 100% black, and while surrounding neighborhoods didn’t have much of a black neighborhood, they received a poor rating too.

“I'm most likely living in a place where it's undervalued or where they steer white people away, or where they foreclose on my home quicker, or they're going to give me a higher interest rate,” Bullock said.