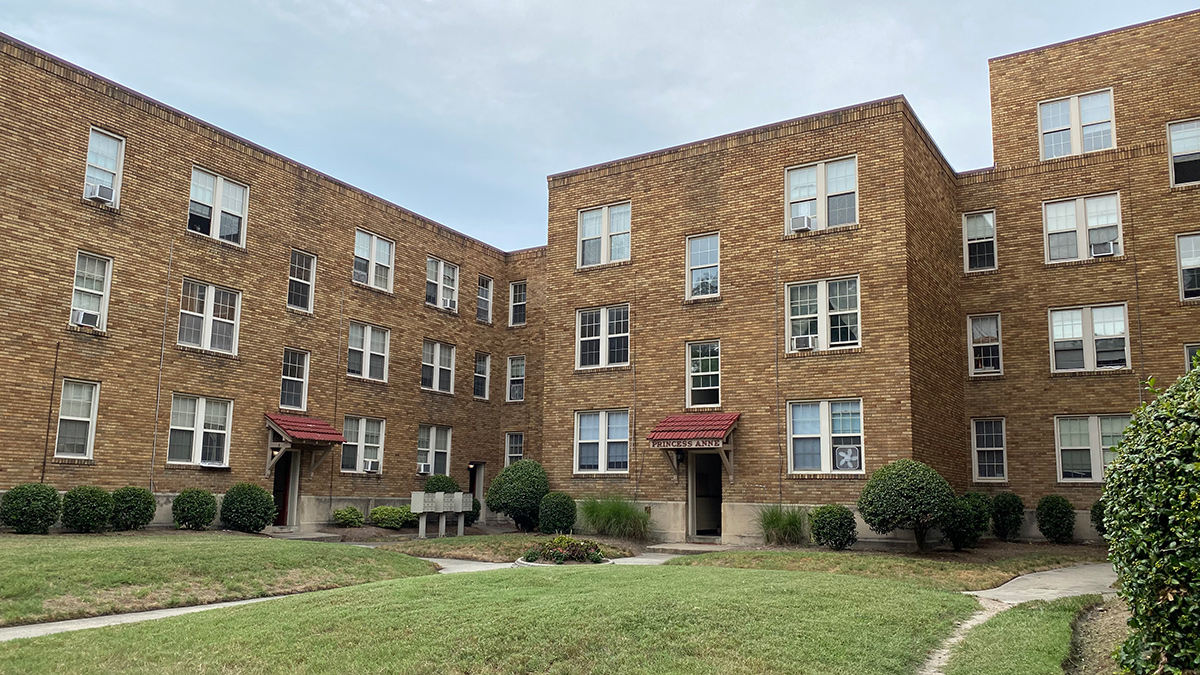 Photo by Sam Turken/WHRO. Across Virginia, district courts are processing hundreds of evictions cases each week.

A few days ago, Rickka Darden was at the defendant’s table in a mostly empty Newport News courtroom. A lawyer representing her landlord stood across the aisle at the plaintiff’s desk.

Darden works as a business administrator with Xerox.

When the coronavirus pandemic started, she was laid off for more than a month and didn't receive unemployment.

Darden lives alone and has Type 1 diabetes, which puts her at greater risk of severe complications with COVID-19.

She told the judge she’s trying to pay the money in the next few weeks. She wanted the court to hold off on granting the eviction. But the judge ruled against her.

Minutes later outside the courthouse, she started to cry.

“The fact that they still took possession — it just is mind-blowing,” she said.

As courts continue to hear eviction cases, thousands of Virginians are potentially at risk of losing their homes because they can’t make rent amid the pandemic. The Commonwealth has a new rent relief program that’s meant to help people avoid evictions.

But housing advocates say the rollout of the initiative has been rough. Interviews with several tenants and landlords suggest many people don’t know about the program or aren’t taking advantage of it.

The result — they’re still at risk of losing their homes.

As part of the Virginia Rent and Mortgage Relief Program, the state has allocated $50 million to local governments and nonprofits. They’re responsible for screening applicants and then directly paying landlords what tenants owe.

The money could help pay current rent and other missed payments dating back to April 1. To qualify, tenants must have an income at or below 80% of the median income of their region.

During a June 25 news conference days before launching the program, Gov. Ralph Northam said evicting thousands of people amid the pandemic would be “unacceptable.” He said the program would target households most impacted by the coronavirus pandemic.

“Expanding access to safe, affordable housing has been and will continue to be a top priority of my administration, during the COVID-19 pandemic and beyond,” he later said in a press release.

But the rent relief program encountered challenges as soon as it started.

The Department of Housing and Community Development (DHCD) launched it June 29, around the same time a statewide eviction moratorium ended. As a result, there was no time to teach tenants about it and let them apply before judges started processing evictions again, said Elaine Poon, an attorney with the Legal Aid Justice Center.

Local governments and nonprofits participating in the program have also scrambled to learn how it works.

“But then every minute, people are before judges and having their evictions heard. It’s a bit too late for those people to receive that rent relief,” Poon recently said on WHRV’s HearSay with Cathy Lewis.

Officials with the Virginia DHCD said local grantees administering money processed payments for 310 households in the first nine days since the program’s launch. Another 591 households have been approved for rental or mortgage assistance and are awaiting required documentation.

WHRO recently interviewed several tenants while they were at Virginia Beach and Newport News’ courthouses for eviction hearings. Nearly all of them said they never heard about the new rent relief program.

“Oh wow. Oh my goodness. That would help me out so much,” said Darden after WHRO told her about it and how to apply. “I would have never known about it.”

After her hearing, a Newport News court clerk handed Darden a small white slip listing a few ways she could seek assistance. The paper included an online link to the application for the rent relief program without any explanation of what it does.

Darden said the slip should have provided more information about the program. She was disappointed she didn’t hear about it sooner.

“You have these resources out here and you’re not even telling people. I could have did it as soon as I heard about it,” she said.

Landlords and property managers also said they were unaware of the initiative.

Jason Feuerhahn has sixty rental houses across the Southside. One of his tenants, Cortney Croom, said he lost work amid the pandemic and owes Feuerhahn back rent.

Feuerhahn said he heard about the program but hasn’t looked into it.

“There so many rumors going around with so much stimulus packages. There’s so much government handouts right now,” Feuerhahn said. “So I try to keep up with everything, but it’s difficult.”

A spokeswoman for the DHCD said the state is working to “ensure those Virginians most affected by the COVID-19 pandemic are receiving the assistance needed to pay their rent or mortgage.”

‘They May Force Me Out’

Across Virginia, courts are now hearing hundreds of eviction cases each week, based on a review of dockets.

A judge’s approval of an eviction means a landlord can remove the tenant after a 10-day appeal period expires. Housing attorneys say that puts renters in an especially fraught and stressful position.

For Darden, she thinks she could pay off the back rent in the next few weeks. But she’s worried her landlord won’t give her enough time and will seize her unit now that a judge granted the eviction.

“If I don’t pay by August, they may force me out,” she said.

Stevonte Thomas of Virginia Beach recently received an eviction continuance, which delays a judge's decision. He last told WHRO he had just over a week to pay $4,000 in back rent. If he doesn't pay, a judge could approve the eviction request.

“It kind of does make you panic sometime,” said Thomas, who’s a stay-at-home dad. His girlfriend, with whom he lives, lost work amid the pandemic.

Evictions can have lasting consequences. Beyond forcing a tenant out of their home, an eviction usually remains a part of someone's financial record, which can make it harder for them to find a new place to live. Apartment landlords are less likely to rent to someone with an eviction history.

A new state law lets tenants ask a judge for a 60-day eviction continuance if they can prove they've lost income due to the pandemic. But housing advocates say it doesn't make up for problems with the rent relief program because many people don't know about the law.

Poon and Christine Marra of the Virginia Poverty Law Center want Northam to issue another eviction moratorium through executive order. They say that would give tenants more time to learn about the rent relief program and receive assistance before they have an eviction hearing.

A spokesperson for Northam said issuing an eviction ban could raise legal challenges that could get tied up in court. Northam has instead asked local general district courts to delay eviction proceedings.

But that decision is up to each locality. And most are still hearing cases.

The state’s highest court issued a moratorium on eviction cases in June to give the state time to create the rent relief program. But it’s since expired. The Supreme Court currently has no guidance asking local courts to delay eviction cases.

ForKids is one of the organizations that reviews applications and distributes payments as part of the rent relief program.

McCormick praised the initiative because it provides a large sum of money for housing assistance. But she said her team had little time to learn about it before it went into effect. The nonprofit is now working as quickly as it can to write checks.

“We knew things were coming, but we didn’t know how it would be implemented,” she said. “There’s no doubt we need more time to process applications.”

Housing attorneys say Virginia’s eviction problem could worsen in the next few weeks.

A federal eviction ban for properties with federally-backed mortgages ends July 25. Extra unemployment benefits as part of the CARES Act also are expected to expire later in July. So a lot more renters could soon be at risk of losing their homes for nonpayment of rent.

“Knowing all of that, it would be prudent to have a longer-term plan for evictions,” said Marra of the Virginia Poverty Law Center.

She added there should be a “major public awareness campaign about the rent relief that’s out there and how to get it.”

If you're in need of rental assistance, you can apply to the Virginia Rent and Mortgage Relief Program here.