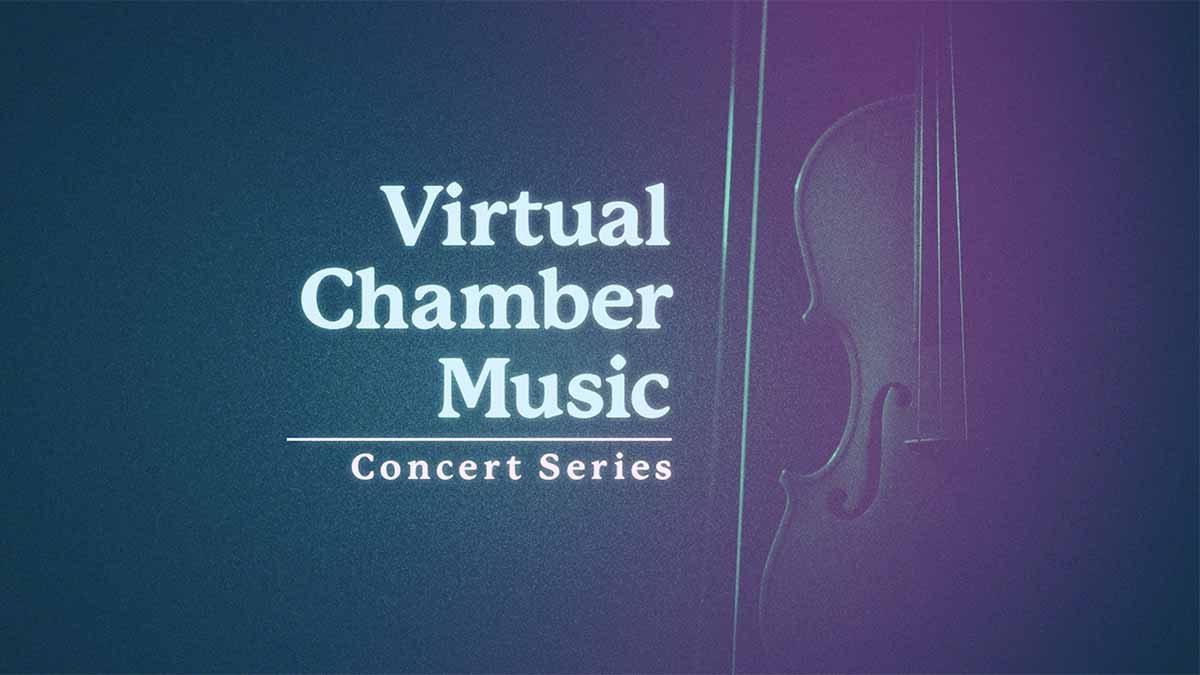 This winter, join WHRO for a virtual chamber music concert series, featuring exclusive performances from outstanding local musicians. A new concert video will be premiered each Monday on the WHRO Public Media Facebook page,  at 5 p.m. starting January 11, and audio recordings will also be shared on A Local Touch, Wednesday evenings at 9 p.m. on WHRO FM. These performances were filmed in November 2020 at the Susan S. Goode Fine and Performing Arts Center, in collaboration with the Virginia Wesleyan University Concert Series. As we all await the return of in-person concerts, hopefully in the near future, we hope you enjoy these virtual performances highlighting some of our area’s wonderful classical musicians!

Formed in 2015 by members of the Virginia Symphony Orchestra family, the New Commonwealth Quartet has established itself as an in-demand ensemble in Hampton Roads. In addition to presenting programs of cutting-edge music through Funhouse Fest, NCQ has also created a popular Sunday afternoon chamber music series at the East Beach Community Center in Norfolk, and has recorded tracks for Bruce Hornsby’s next album. NCQ is made up of Elizabeth Vonderheide, violin; Jonathan Richards, violin; Matthew Umlauf, viola; and Elizabeth Richards, cello.

Did you miss this performance? Watch the concert.

Todd Holcomb’s performances have been described as virtuoso and a force of nature. As a soloist and chamber musician he has been awarded top prizes in competitions including the East Carolina University International Guitar Competition, Mississippi International Guitar Competition, and J.C. Arriaga Chamber Music Competition. He holds a Master’s Degree in Music Performance and Pedagogy from Peabody Conservatory, an Artist Diploma from Columbus State University, and a Doctor of Musical Arts degree from Shenandoah Conservatory.

Todd is a dedicated music educator. He is currently a faculty member at Norfolk State University, Virginia Wesleyan University, and Christopher Newport University. Formerly, he has taught at the New Orleans Baptist Theological Seminary and the University of Southern Mississippi as a full-time teaching assistant. Also active as a performer, he regularly performs throughout the mid-east coast region as a soloist and with flutist Wayla Chambo as Duo Thalassa. Recently, he has been featured in performance by the Norfolk Chamber Consort, the Open Door Concert Series, Coastal Virginia Chamber Music, Alvernia University, the Virginia Wesleyan Concert Series, the Virginia Symphony Chorus, and the Virginia Opera in their production of Il barbiere di Siviglia.

As the Executive Director of the nonprofit arts organization Tidewater Classical Guitar, Todd is dedicated to bringing guitar performance and education to the communities of Southeastern Virginia. He resides in Williamsburg, VA with his wife Cathy and son Ethan.

Praised for their lyrical, ethereal sound, the flute and harp duo of Debra Wendells Cross and Barbara Chapman warm the hearts and souls of their audiences with creative and accessible programs. Both long-time members of the Virginia Symphony Orchestra, the duo has been featured often on the Chamber Music Series of the Virginia Arts Festival, on other recital series throughout Southeastern VA and has been broadcast nationally on NPR’s “Performance Today”. In 2000, they were founding members of Virginia Chamber Players, an ensemble committed to presenting quality chamber music, with an emphasis on American and unrecognized repertoire. The research of lost treasures of the flute and harp repertoire, and the creation their own arrangements of traditional Celtic tunes and hymns has produced 4 duo CD recordings.

Debra Wendells Cross has held the position of Principal Flute in the Virginia Symphony since 1980, and presently serves on the faulty of Old Dominion University. For 17 years she was Principal Flutist of the Eastern Music Festival in Greensboro, NC and spent the 2004-2005 season as Interim Principal Flutist of the Buffalo PhilharmonicThe Seattle native graduated from the New England Conservatory of Music in Boston, where she studied with James Pappoutsakis. From there she went to study with Michel Debost in Paris, France.

Barbara Chapman has held the position of Principal Harp for the Virginia Symphony since 1988 and Virginia Opera since 1986. Barbara has held the position of Principal Harp with the Glimmerglass Opera of NY and toured the US with the American Harp Society’s Young Artist Program. She has served on the faculty of The College of William and Mary and has led workshops at the University of Michigan, Ann Arbor and the Eastman School of Music, New York.

Pianist Lee Jordan-Anders is Artist-in-Residence and Professor of Music Emeritus at Virginia Wesleyan University in Norfolk, Virginia, where she served on the faculty for twenty-nine years, teaching classes in aesthetics, listening, music theory, chamber music, and applied piano. She was the Music Director and Conductor of the Orchestra of the Eastern Shore from 2009 to 2014 and taught at the Governor’s School for the Arts in Norfolk from 2014 until 2018. She continues to perform frequently both as a soloist and as a collaborating pianist.

She began her early music training at Ball State University in Muncie, Indiana, and received Bachelor and Master of Music degrees in Piano Performance from Northwestern University's School of Music where she studied piano with Pauline Lindsey. In 1980 she moved to Madrid, Spain, where she pursued an active performing career, both as a soloist and in chamber ensembles. Her articles on various aspects of piano teaching have appeared in Clavier magazine, and she is a frequent guest speaker and adjudicator for piano teachers’ organizations. She continues to be an active performer and scholar, giving concerts and lectures throughout the United States. During the fall of 2005 she was in residence at the Cité Internationale des Arts in Paris where she studied the works of Claude Debussy and Erik Satie. She has worked extensively with the Chrysler Museum of Art in Norfolk, creating several different programs connecting works from their collection to music that she selects and performs. In 2013 she was invited by the Virginia Museum of Fine Arts in Richmond to create a similar program. In 2014 she released her fifth CD recording, Images: Works for Solo Piano by Claude Debussy.

Program:
Jake Heggie: Songs and Sonnets to Ophelia
1. The Spring is Arisen; Ophelia’s Song
2. Women have loved before as I love now
3. Not in a silver casket cool with pearls
4. Spring

Texts for the songs can be found here: https://songofamerica.net/song/songs-and-sonnets-to-ophelia/

Anna Feucht has garnered praise for her "exciting coloratura" and "exceptionally beautiful and powerful sound," with "notes that soar towards the ceiling." She is a frequent soloist with Virginia Opera and Tidewater Opera Initiative. Roles performed include Laetitia in The Old Maid and the Thief, Romilda in Serse, Mme Herz in Der Schauspieldirektor, Rosalinde in Die Fledermaus, and Pamina in Die Zauberflöte. She has often appeared as a soloist with orchestra; most recently as the soprano soloist in Poulenc's Gloria with the Virginia Symphony and Verdi's Requiem with Symphonicity. She appeared as the soprano soloist in Elijah with the Williamsburg Choral Guild. She has also made repeated appearances with the Ocala Symphony Orchestra and many others as soprano soloist in Handel’s Messiah. Anna obtained her Master of Music degree from the University of Florida and her Bachelor of Music from Christopher Newport University. She lives in Norfolk, Virginia with her dog Wednesday.

Steve Kolb holds degrees from Northwestern University (M.M.) and Wheaton College (B.M.). Kolb's teachers include David Kaiserman, Daniel Paul Horne, William Phemister, Reginald Gerig, Andor Kiszely and Maureen Hooper. He served as a member of the piano faculty at Wheaton College, where he also founded a children's music program. Mr. Kolb has appeared locally in numerous classical and jazz solo and accompanying roles and has recorded with the ACC Heritage Band (Langley), Swing Shift (jazz trio), Renewal Artists, and the Virginia Symphony. He holds certification in Orff-Schulwerk, (Levels I, II and III). Mr. Kolb has been recognized by the Cultural Alliance of Hampton Roads for contributions to the cultural life of the area. He is a past chairman of the Southern Region of the National Guild of Community Schools of the Arts and past board president of Bay Youth Orchestras of Virginia.

Rebecca Gilmore, an orchestral and chamber musician, celebrates her 20 years of work with Maestra JoAnn Falletta and the Virginia Symphony Orchestra. As Assistant Principal Cello, she has led Strauss operas and has performed dynamic cello solos of Vivaldi, Double Cello Concerto, and Beethoven, Triple Concerto. Ms. Gilmore enjoys a varied career as an extra with The Philadelphia Orchestra and Baltimore Symphony Orchestra. A native North Carolinian, she was Principal Cellist of the Greensboro Symphony where she made her solo debut with Tchaikovsky's Rococo Variations. Now calling Hampton Roads home, chamber music has been a steady passion with numerous highlights. One such Virginia Arts Festival event was to join forces with JoAnn Falletta in a 2010 NPR live broadcast with the lively Schubert Guitar Quartet. Ms. Gilmore has been a featured solo and chamber artist with the Virginia Arts Festival, the Virginia Symphony Orchestra, and numerous college music series, including William and Mary, Christopher Newport University, Old Dominion University and Virginia Wesleyan College.

As a leader and co-founder of her own professional chamber ensemble, Ambrosia Quartet, the group has thrived since the fall of 2002. Enjoying a wide range of music for the love of it, 'Brahms', and for the challenge of it, contemporary composers such as Pulitzer Prize winning, Caroline Shaw , the Ambrosians have been featured on series locally by The Feldman Chamber Music Society, ODU's Hermitage Series, Sundays at Four and the Jewish Museum and Cultural Center. Ambrosia Quartet has been fortunate to have traveled beyond their home base as far as Colorado and China. In 2018, Ambrosia Quartet recorded their first professional recording of Dr. Adolphus Hailstork's music, "Swing Low, Sweet Chariot". Ms. Gilmore holds both a Bachelor's and Master's degree in cello performance from Indiana and Rice Universities. Her teachers include Janos Starker, Tsuyoshi Tsutsumi, Norman Fischer, and Desmond Hoebig. Ms. Gilmore is currently teaching cello through the Academy of Music (Norfolk, VA) and is on the faculty of Christopher Newport University.

Daniel Lau, piano, has performed around the world in recitals and with orchestras and has been praised for his “exemplary artistry” and “beautifully shaded playing.” A versatile pianist, violinist and conductor, Daniel has served as Music Director for performances of Manon, Amahl and the Night Visitors, The Merry Widow, and The Magic Flute, among others. Lau attended Loma Linda University, where he served as concertmaster of the orchestra and 1st violinist of the LLU String Quartet and won the coveted Dean’s Award. He then attended the Peabody Conservatory of Music, becoming a member of the Pi Kappa Lambda honorary society while earning masters and doctoral degrees. Dr. Lau is a dedicated educator of music and has given masterclasses and clinics throughout the United States. He is on the Executive Board of the Maryland State Music Teachers Association and is Chair of the Music Technology Committee. He serves as Professor and Chair of the Department of Music at Washington Adventist University. Daniel resides in Baltimore with his wife, mezzo-soprano Kyle Engler, and their daughter, Channing.

This performance is partially supported by funding from the Virginia Commission for the Arts and the National Endowment for the Arts.