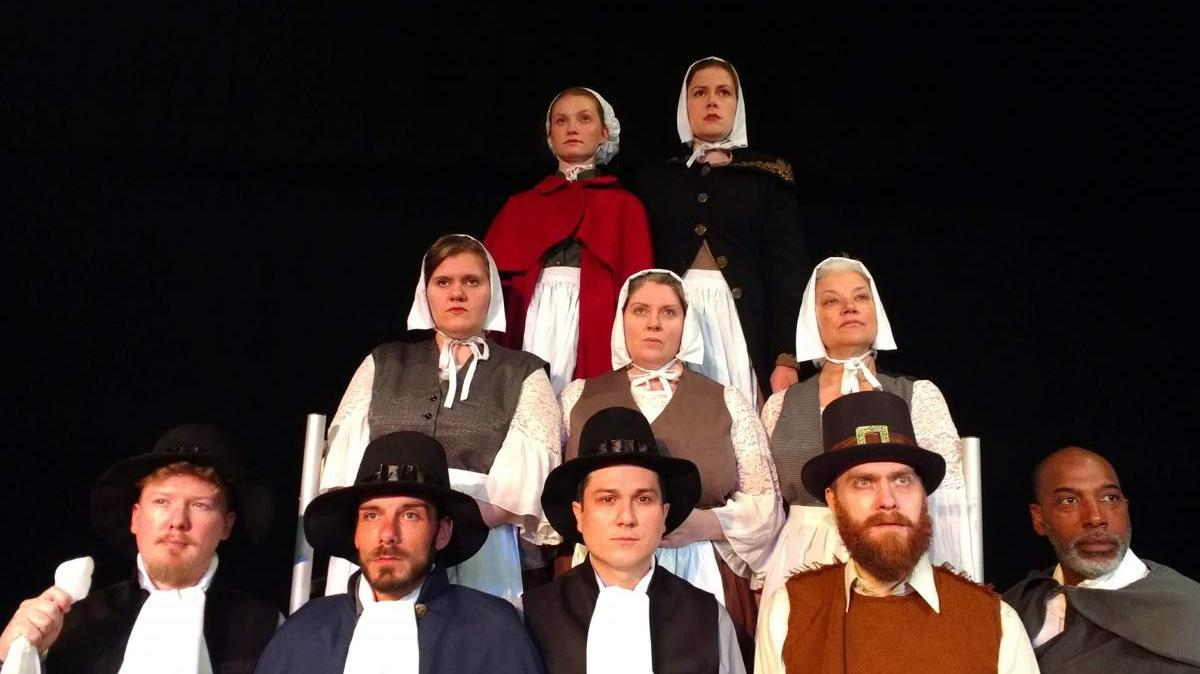 Core Theatre Ensemble will perform its original adaptation of The Scarlet Letter by Nathaniel Hawthorne at the Little Theatre of Norfolk, Thursday, November 29 through Saturday, December 1.

Core Theatre Ensemble is an internationally touring company based in Hampton Roads. Its members, Emel Ertugrul, Edwin Castillo, Laura Agudelo, Nancy Dickerson, and Samantha Johnston, met through the theatre program at Old Dominion University (ODU). I spoke with Core’s leaders, Emel Ertugrul and Edwin Castillo, about the group, The Scarlet Letter, and the arts in Hampton Roads and around the world.

Upon graduating from ODU, Ertugrul and Castillo wanted to play a more active role in the creative process. “While we were actors, we also had gotten into making things” Ertugrul remarked. There were ample performance opportunities, but they weren’t always the right fit. “We said ‘we can’t not make something. We need to make something,’ and we decided, well, let’s make a show,” said Ertugrul.

Core is an ensemble in every sense of the word; actors, directors, stage managers, designers, and all members of the team play a key role in the artistic journey and vision. “Ensemble to us means it is a group event. Anybody that’s involved basically has a stake,” affirmed Castillo, who’s serving as the director (or “outside eye”) for The Scarlet Letter.

Core has toured their shows to multiple countries and has a keen eye on the growth of arts communities around the world and in Hampton Roads. Castillo and Ertugrul spoke about seeing stunning performances at international festivals in which countries performed shows in their native languages. “We’ve seen shows in Spanish, French, German, and Russian, but they’re so well-made that we understood everything that was going on,” said Castillo.

When Core began their ensemble, they decided to focus on works in the public domain for financial reasons. Revamping classics, showing their relevance, and drawing connections between different art forms have become the group’s overarching goals, whether they’re performing poems and stories by Edgar Allan Poe, or a classic novel like The Scarlet Letter. Core’s plays undergo an ongoing process; they’re continuously reworked and rewritten every time they’re produced.

Core has wanted to mount an adaptation of The Scarlet Letter for six years. Ertugrul adapted the script, going through numerous revisions and three drafts. The majority of the language is Hawthorne’s original text, but music, dancing, and singing help narrate the tale. Castillo said, “One reason why we choose a lot of these stories is that they’re stories that everyone has studied at one point in their life. What makes things classic, you know, as far as literature or art in general, is that you can remember these stories and these works, and then every time you look back, you think, well, how does that apply to me nowadays?”

The Scarlet Letter tells the story of a woman named Hester Prynne, punished for having a child out of wedlock in Puritan 17th-century New England and forced to wear a scarlet “A” on her dress. The truth behind Hester’s sin unfolds over the years, revealing a tale of redemption, guilt, and inner strength.

The book is read by English classes across America, carrying a multitude of meanings to its readers. “It’s the strength of women in voice and silence,” noted Ertugrul, “When she chooses to speak and when she chooses to not. I think the most strong character out of the entire novel is Hester. She chooses and everyone else sort of collapses around her, and in the end she’s still standing, yet she is the one who is also punished.”

Castillo added, “There’s the overall theme of guilt, particularly for the men, dealing with guilt and dealing with punishment, or lack of punishment.”

The Scarlet Letter carries modern elements, insight, surprises, and juxtapositions. “Come with expectations, but be ready to throw those out the door, because it probably isn’t what you remember,” said Castillo.

The show plays Thursday, November 29 through Saturday, December 1 at the Little Theatre of Norfolk. Visit ltnonline.org for tickets.