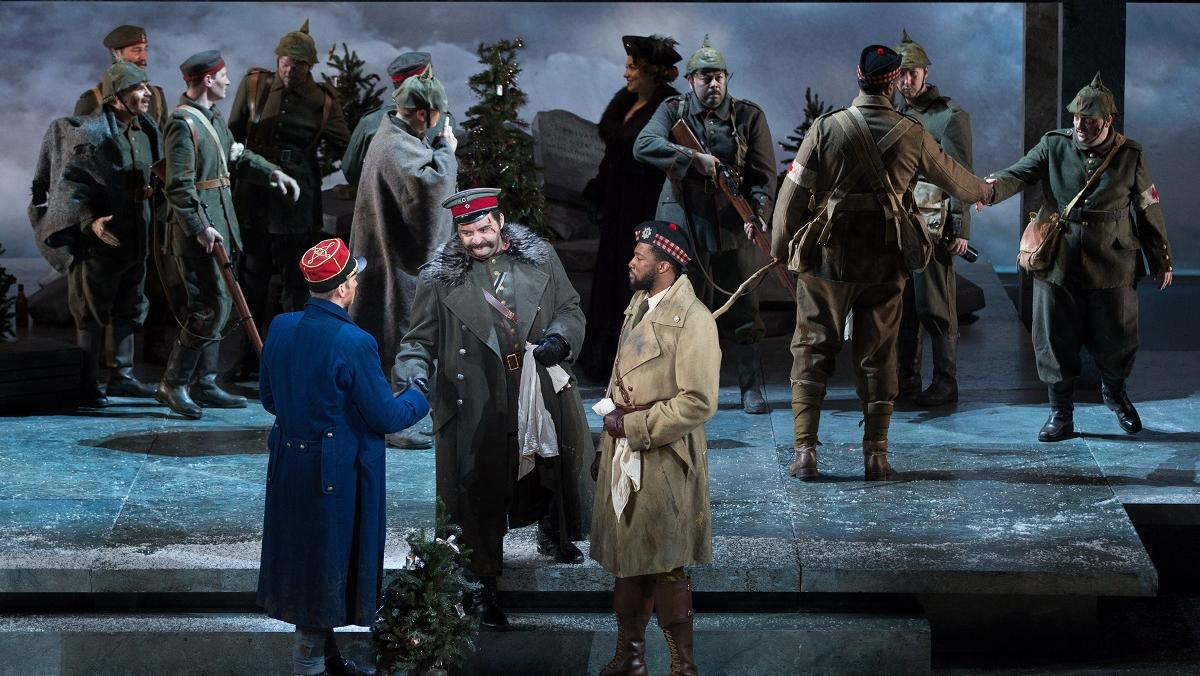 Last weekend, Washington National Opera opened Silent Night at the Kennedy Center to memorialize the centennial of the World War I armistice. The Great War catapulted the City of Norfolk through a tremendous population boom and led to the Navy's acquisition of the site that would eventually become Naval Station Norfolk, the largest naval base in the world. With our strong military presence and arts community, Silent Night would be an instant hit in Hampton Roads, although it’s well worth the trip to D.C. in the meantime.

The Pulitzer Prize-winning opera features music by Kevin Puts and a multilingual libretto by Mark Campbell. Silent Night is not an easy opera to produce: it features an unusually large male cast with three armies and robust orchestration. The musical language is altered for the intimate Eisenhower Theater through a condensation technique combining the timbre of multiple instruments to approximate the sound of one.

Silent Night is based on the 2005 Christian Carion film, Joyeux Noël, a fictional account of the cease fires that occurred during the first Christmas Eve of World War I. Troupes stopped fighting to enjoy a single night of peace, which turned into several days. They buried their soldiers, shared Christmas tokens, hymns and remembrances, and learned in the process that “behind enemy lines are hearts just like yours.”

Three narratives guide us through the opera’s overarching theme of shared humanity. Raquel González and Alexander McKissick play two renowned German opera singers named Anna Sørensen and Nikolaus Sprink, performing music meant to invoke the style of the Classical era as the opera begins; their singing is interrupted as Sprink is conscripted into the German army, transitioning us to a battlefield.

Next we move to the Scottish soldiers on the same front. Brothers Jonathan and William Dale volunteer for the army; William is killed and Jonathan vows to revenge his brother’s death. On the French side, Lieutenant Audebert desperately misses his pregnant wife back in Paris, but felt a duty to enlist. Audebert bonds with a young soldier named Ponchel, who fantasizes about having coffee with his mother, who lives only an hour away.

Directed by Tomer Zvulun, the opera showcases present and past members of the Domingo-Cafritz Young Artist Program, currently in its 17th year. Alexander McKissick displays a lovely tenor timbre as the German opera singer, Nikolaus, particularly during his final aria. Raquel González, as Anna, is heartful, soaring, and sounds her best during the acapella portions when she’s singing to the soldiers on Christmas Eve. Arnold Livingston Geis brings an emotive, thrilling energy to his role as Scotsman Jonathan Dale. Michael Adams as Lieutenant Audebert sings a gorgeous, melancholy melody in homage to his wife as snow begins to fall. The male chorus sings of the joys and safety of sleep, remembering home and better times. Overall, the ensemble tackles the challenging music with strong tones and mostly excellent diction; the first large number after the initial battle is especially roaring.

Washington National Opera’s visuals are always impressive. Silent Night’s set geniusly uses screens and projections to quickly and artistically change scenes, and to also memorialize names of those who died in World War I. The screens sometimes stand between the audience and performers, adding a sense of drama as they are raised to reveal the next location. The three-story set houses different troupes on its levels, illustrating their similarities and proximity despite their differing ideals.

Silent Night has grown in popularity over the last few years and is on its way to becoming a standard of operatic repertoire due to its stunning music and themes of humanity. The opera has been performed in Philadelphia, Calgary, Fort Worth, Cincinnati, Montreal, Ireland, Cooperstown, and more. Puts’s music creates a heart-warming, memorable, and accessible evening, crafting separate musical languages for the German, Scottish, and French soldiers, and enlisting additional instruments like the harmonica and bagpipes. Puts adopts a foreshadowing tone as the troupes agree to the temporary truce; it’s clear they will struggle reconvening as enemies.

Puts summarizes the piece’s most important theme in the program notes: “Once your sworn enemy ceases to be faceless, war becomes far less possible.” On opening night, ambassadors from 15 different countries involved in World War I, and some that were not, joined the cast onstage at the end of the performance. Presented in honor of veterans and members of the United States Armed Forces, Silent Night will speak to and resonate with many.

Silent Night will play select nights through November 25 in the Eisenhower Theater in the Kennedy Center. For tickets and more information, visit kennedy-center.org.