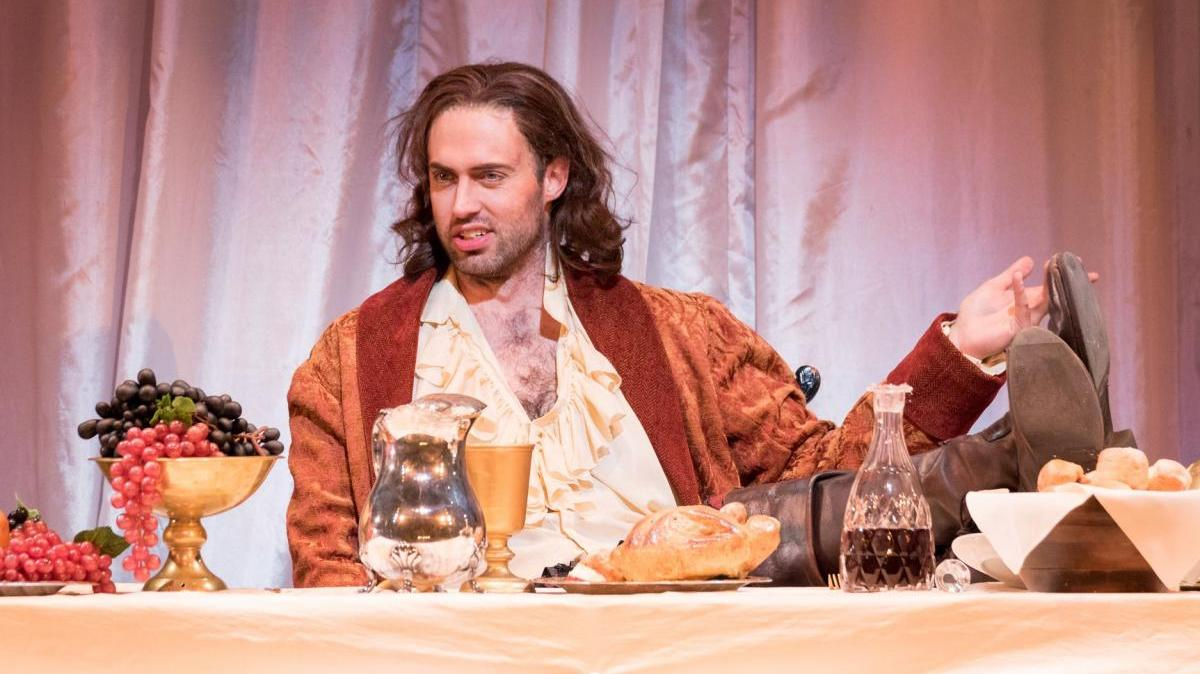 Virginia Opera’s new production of Don Giovanni opened on Friday night in Norfolk. The renowned and frequently performed opera, with music by Mozart and a libretto by Lorenzo Da Ponte, narrates the escapades of its title character, inspired by famous seducer, Don Juan.

A lightning bolt flashes to reveal our antihero standing center stage as the overture begins. He’s masked and climbing through a woman’s window when a black screen goes down to hide what happens next. Later, the woman, Donna Anna, runs after Giovanni, telling him not to go; her father, the Commendatore, emerges to defend her honor and is killed by Giovanni, who flees the scene with his disgruntled servant, Leporello.

Don Giovanni follows the galavantings of the notorious womanizer as he’s chased by Donna Anna, her fiancee, Don Ottavio, who has sworn to revenge her father’s murder, and Donna Elvira, a former scorned lover seeking vengeance.

Tobias Greenhalgh is a pleasant-voiced, boorish, pretty-boy sort of Giovanni. Attired in dazzling, form-fitting apparel, it’s clear why women fall at his feet. Director Lillian Groag makes a handful of unique staging choices. Greenhalgh sings his aria “Deh vieni alla finestra" directly to the audience, closing with a kiss in our direction. In the “Champagne Aria,” Groag has Greenhalgh partying and snorting intermittently, ending with shadows of flames engulfing him.

It’s sometimes difficult to hear the lower male singers over the Virginia Symphony Orchestra. Bass-baritone Zachary Altman exhibits a lovely voice as Leporello, especially during the “Catalog Aria,” listing Giovanni’s many lovers from around the world. The aria is spirited in his voice and its humorous lines get many laughs from the audience. Altman is a superb singer, but not a typical “basso buffo” as some prefer for the role of Leporello. A wider vocal contrast with Greenhalgh would have given more spark and comedy to the duo’s dynamic.

Sarah Larsen gifts us with masterful singing as Donna Elvira. Her grand, majestic entrance is as chill-inducing as intended. Rachelle Durkin is a silvery-voiced Donna Anna, singing wonderfully and breeding much fire and despair during her appearances. Sometimes viewed as a throwaway character, her fiancee, Don Ottavio is a deceptively difficult role. Tenor Stephen Carroll handles the vocal demands with ease, beauty, control, and a soaring legato, especially during his aria “Il mio tesoro.”

Mozart ensembles are notoriously complex. Although not every number in the production comes together perfectly, Virginia Opera’s cast does a solid job.

A projection of a rose serves as the backdrop for the show, changing colors to match the tone. Outlines of a building, a white curtain, and some chandeliers are the main set pieces needed to bring this Don Giovanni to life. Set changes are cohesive, well-paced, and slick. Virginia Opera’s imagining of hell is suitably sinister. The Commendatore’s voice is amplified in the opera house, but he is not revealed in his ghostly form onstage until the final moments of the show, an unconventional, but spooky staging choice.

Giovanni’s hellish end is followed by a jovial, smug finale. It’s interesting to note this ensemble piece was almost always cut from the opera until the 20th century, making the work wholeheartedly more tragic than comic. Productions omitting this finale present Don Giovanni as only a serious morality tale, missing the humor and questions Mozart and Da Ponte meant to invoke. Virginia Opera’s production balances the dark and light-hearted aspects of the opera well.

Experience one of the best operas ever written by one of the greatest composers the world has seen. Virginia Opera strikes a stellar tone with this reimagining. Yes, there’s sex, frivolity, and recklessness, but no more than what is clearly dictated in the score. The detailed, lovingly-sung production plays once more in Norfolk on Tuesday night at 7:30 PM. From there the show will travel to Fairfax on November 10 and 11, and Richmond on November 16 and 18. Visit vaopera.org for tickets and more information.