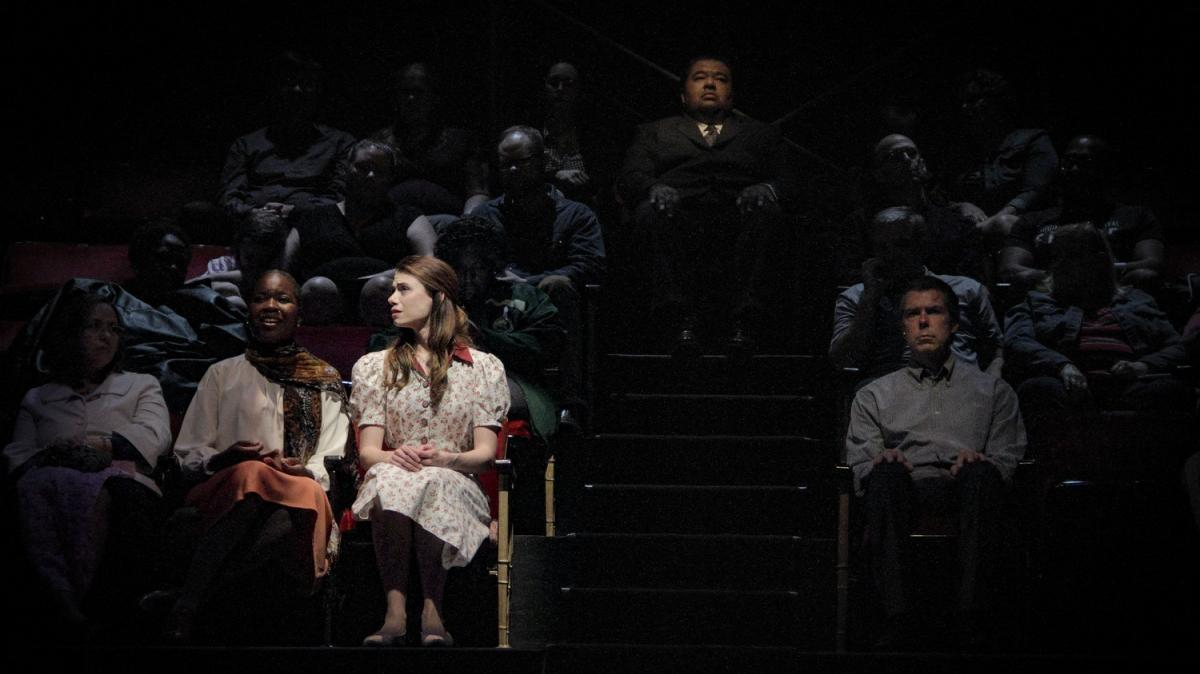 Last weekend, Virginia Stage Company opened its new, immersive production of Thornton Wilder’s Our Town at the Wells Theatre. Our Town follows ordinary lives in a fictional town called Grover’s Corners in the early 20th century. The play within a play is a celebration of joys, pains, promises, and the human experience; it’s beloved as a standard of theater in American high schools, begging the question, “What will Virginia Stage do differently?”

Virginia Stage adds seats to the back of the stage, transforming the Wells into a theater in the round. Actors perform from the boxes, balcony, main stage, and platforms. Minimal props and only basic furniture are used in Our Town per usual, permitting the audience to use their imaginations. Thornton Wilder once complained that most companies performed Our Town with too much drama and nostalgia. This Our Town is likely the most intimate one our region has seen; its subdued nature makes for a personal, realistic experience very much in line with Wilder’s original intentions.

Our Town is superbly cast with seasoned performers. Ellen Harvey makes a firm and engaging Stage Manager. Casting a female Stage Manager provides a feminist lens to the traditional lifestyle portrayed in Our Town, adding new layers to its musings on the role of women in Grover’s Corners. Missy Dowse is heartfelt and emotive as Emily; her final monologue is every bit as sorrowful as expected, but not overdone. Palpable chemistry with Justin Keyes (as George) establishes the sympathy and connection needed from the audience to carry the play to its meaningful conclusion. John Forkner is dryly hilarious and charming as Mr. Webb. The mothers of the cast put in admirable performances as well. Kristi J. Meyers brings goodness and heart to her role as Mrs. Webb. Nikki E. Walker is a strong, compelling Mrs. Gibbs; her final scenes with Emily in the graveyard are especially impactful as she attempts to persuade her not to visit the living world after she’s died.

In the program notes, director Chris Hanna describes the way his perception of Our Town has changed throughout his life. Many of us read or experienced the play as children barely grasping the meaning behind its commonplace scenes. Part of Our Town’s wonder is the many ways its message is conveyed: ordinary life is bland to us, but monumental to those no longer blessed with it. Just like life, Our Town carries subtle beauties that may seem routine upon first glance.

Virginia Stage Company creates a more diverse Grover’s Corners than many other imaginings, less about replicating an old-fashioned New England town and more about representing the type of community shared experiences and ideals can build.

Audio stories from Hampton Roads locals are incorporated into the beginning of Act III, following Harvey’s moving monologue from a box in the theater. “There’s something way down deep that’s eternal about every human being,” she says; we hear the ticking of a clock in the background.

Performed in the historic Wells Theatre, Virginia Stage Company’s production of Our Town is a touching, genuine tribute to the Tidewater community “in our growing up and in our marrying and in our living and in our dying.”

Our Town plays now through November 4. Next up for Virginia Stage Company is A Christmas Carol, playing November 30 through December 23. Visit vastage.org for tickets and more information.