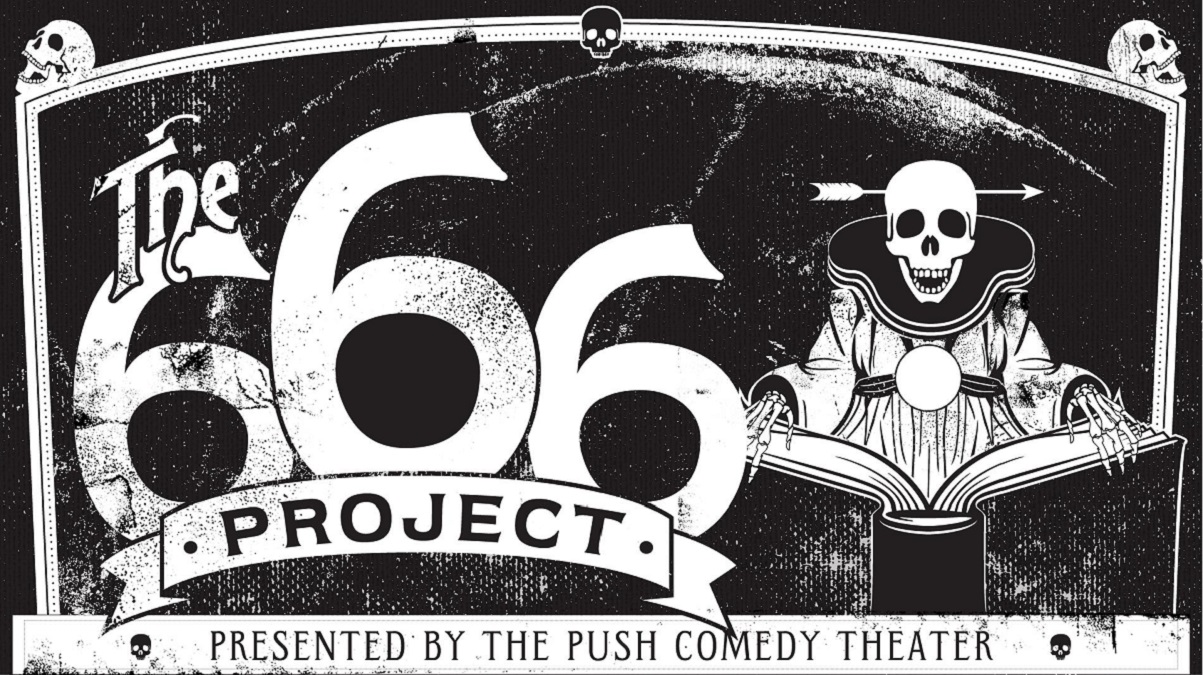 On Saturday night, the Push Comedy Theater unmasked their newest rendition of The 666 Project, one of our region’s best-kept Halloween secrets. The concept brings together six local actors, six local playwrights, and six local directors to mount an original revue of short, spooky plays in homage to all things horror and humor. Half Simpsons, and half Twilight Zone, the carefully curated scripts seldom opt for the cheap thrill or obvious villain.

The 666 Project’s writers and directors produce a consistent evening of contrasting works; the cast members take turns announcing the plays through Rod Serling-style introductions. The show’s narratives include a behind-the-scenes look at a sensationalist minister, evil in small town America, a comical take on ghost tours, deals with the devil, sinister sunsets, and highly abnormal pregnancy cravings. Delving further into the plots would spoil the surprise, hilarity, and rising blood pressure from attending one of the remaining shows.

A unique concept feeding from the talents of our local arts community, The 666 Project has improved in quality and cohesion every year. This year’s cast is fresh, devoted, and assured, becoming unearthly and creepy when needed. Per usual, every cast member plays multiple roles in the show. Morgan Egger pops in every scene with her brazen delivery and committed characterizations of multiple tourists and wacky wives. Nick Nauert, who encapsulates villains impeccably well, crafts some of the show’s most spine-tingling moments, especially in “Unmasked,” the most menacing of the plays. Egger and Nauert perform a remarkable, gruesome, and well-coordinated sequence in the last piece, “Anything for You,” an attestation to the lengths men will go to please their pregnant wives.

Sandy Gamlin, Diana Dalton, Bobby Mercer, and Michael Stypulkoski put in strong performances as well; the cast has a deep connection to the material and does not waste a moment merely going through the motions. Gamlin and Nauert are convincing and amusing as real ghosts struggling to scare visitors on a haunted tour and Stypulkoski is disarmingly friendly yet ominous in “When I Came to Die.” The 666 Project even features a brief moment of inspiring romance between Dalton and Mercer in “Devil at the Crossroads.”

The show’s lighting and sets add layers to the frights, with swift changes and colorful glows that match the moods of every scene.

The Push Comedy Theater has been producing The 666 Project for four years. Despite its bizarre themes, it’s their most accessible production, more similar to a traditional theatrical play than an improv show; it’s also a testament to the skill, dedication, and creativity constantly behind the scenes and onstage at their space. The group produces multiple shows every weekend and offers classes in improv, sketch comedy writing, stand-up comedy, and corporate team-building for community members of all ages.

I strongly recommend seeing this show whether you already love the Pushers or haven’t had an opportunity to see one of their shows yet. The 666 Project is not only a remarkable production, but a killer introduction to the group and the comedy magic they bring to Hampton Roads. You’ll laugh, shriek, cry, and likely have your appetite spoiled. What more could you want? The 666 Project is playing now through Sunday, October 28. Visit pushcomedytheater.com for tickets and more information.