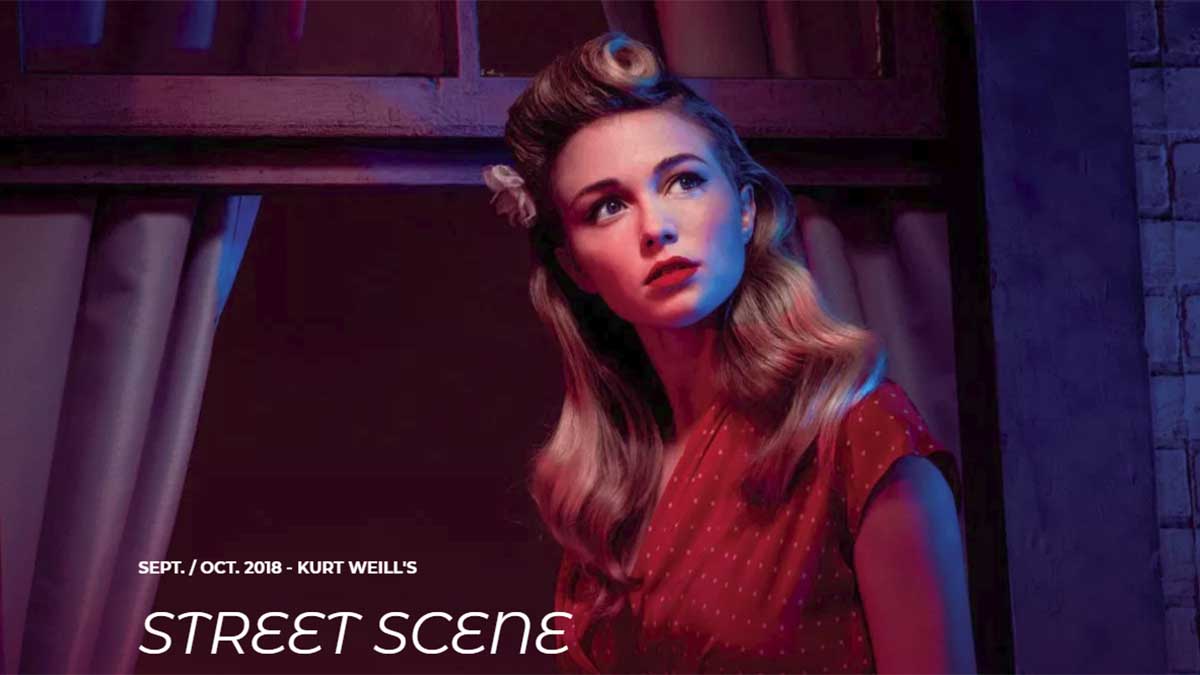 Last weekend, Virginia Opera kicked off its 2018-2019 season with Kurt Weill’s Street Scene. Street Scene narrates 24 hours of family life in front of a tenement in 1940s New York City, encompassing themes like domestic violence, immigration, and wealth inequality that could have been torn from 2018 headlines.

The scandals of the Maurrant family and the resulting tragedy are the centerpieces of Street Scene. Mrs. Anna Maurrant, unhappily married to stagehand Frank Maurrant, is rumored to be entangled in an affair with a milk collector; Anna’s daughter, Rose, is pursued by pushy suitors at every turn, as well as her neighbor and longtime friend, Sam, who yearns to escape the tenement with Rose at his side.

Street Scene is a star-studded, diverse collaboration between composer Kurt Weill, poet Langston Hughes, and playwright Elmer Rice, who wrote the source material and adapted the book for the musical. Street Scene is a hybrid of opera and musical theatre and offers a potpourri of genres, including jazz, swing, classical, big band and blues. The ultimate melting pot of styles, it’s a difficult work to cast and perform well.

Operatic soprano Maureen McKay makes an expressive and natural Rose Maurrant. Her diction and rich middle register are the best of the cast, blooming over the swells of the orchestra during “What Good Would the Moon Be.” Her wistful reprise against a lamppost after a fight with her father is breathtaking. David Blalock plays Rose’s bookworm love interest, Sam Kaplan, clinging to any shred of affection Rose offers as she reassures, “remember that I care.” Blalock approaches the opera’s most famous aria, “Lonely House,” with a straight, even tone that occasionally lacks support.

Zachary James is an intimidating, gruff Frank Maurrant. Abusive, sexist, racist and irrational, Frank proclaims, “Let things be like they always was,” as he decries flimsy dresses, birth control and foreigners. James’s booming basement voice is superbly suited for the role of Frank; his tall stature lends terror to the villain. Director Dorothy Danner displays a frightening vignette of a man preparing to deliver a beating in the top window of the tenement as James sings his aria.

Jill Gardner sounds beautiful as Anna Maurrant, but her pivotal aria “Somehow I Never Could Believe” lacks dramatic energy. Due to its length, more compelling acting is required to keep the audience engaged in the piece. In addition, the orchestra overpowers Gardner’s voice during key climactic moments, likely due to vocal writing that sticks the soprano in her middle register over robust orchestration. Gardner’s vocals are more audible later in the show, particularly during the contemplative “A Boy like You.”

We see hints of a strong comedic actor in Logan Z. Webber, who makes a snappy appearance as Daniel Buchanan, lamenting in a Broadway-style number that pregnancy is harder on the husband than the wife.

The “Ice Cream Sextet” is succinct, dynamic, and well-rehearsed, especially during the a cappella portion. April Martin (as Greta Fiorentino) displays glistening high notes. Other supporting cast members bring excellent vocals to their spotlights as well. Trevor Neal (as Henry Davis) croons the charming “I Got a Marble and a Star” between numbers, sometimes tapping on trash cans with the melody. Benjamin Werley plays the Pavarotti-style tenor Lippo Fiorentino with ease and fun energy, spouting out soaring lines from bel canto operas. The Governor’s School for the Arts and other local schools loan talented youth who play games and dance goofily on the tenement staircase that serves as the backdrop for the opera.

The velvet-voiced Peter Kendall Clark makes an aggressive Harry Easter, domineering Rose in a dance and asking, “Wouldn’t you like to be on Broadway?” Brooke Nicole Jones has a pretty vibrance to her voice and sweet youthful energy during the ensemble song “Wrapped in a Ribbon and Tied in a Bow.”

Song-and-dance number “Moon-faced, Starry-eyed” features musical theatre performers Ahnastasia Albert and David Michael Bevis as Mae Jones and her beau Dick McGann. The wonky duo leaps and dances up and down the stairs, jitterbugging and swinging their way to uproarious applause. The number is a temporary relief from the depressing subject matter of the opera.

A tribute to the diversity of American music and people, Street Scene is seldom performed, likely because it is difficult to classify and digest and features wholly unsympathetic male villains. Virginia Opera’s performance is captivating and mostly vocally excellent—its main flaws are due to Kurt Weill’s tricky writing, an emotionally draining plot, and a lack of cohesion between the varied genres.

Rose triumphs at the end of Street Scene, but not in love. This isn’t an opera in which the woman ruins her life in pursuit of unrequited or toxic romance; our heroine’s defiant exit signals she’s ready to claim her agency.

Street Scene is headed to Fairfax on October 6th and 7th and to Richmond on October 12th and 14th. Next up for Virginia Opera is Mozart’s masterpiece, Don Giovanni, in November. Visit vaopera.org for tickets and more information.