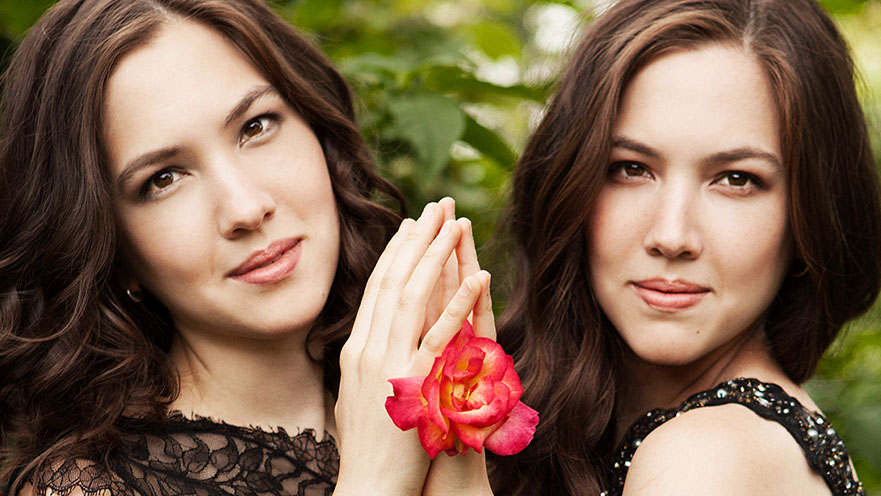 Last week Christina and Michelle Naughton performed a program of piano works at the Robin Hixon Theater as part of Virginia Arts Festival. The twin pianists studied together at the Juilliard School and the Curtis Institute; they have performed with the Ravinia Festival, the Lincoln Center, the Kennedy Center, and numerous prominent symphony orchestras around the world.

Their shtick is the appeal of twin sisters playing side by side, but both Naughtons are undeniably talented and well-trained as individuals. Michelle Naughton plays with a reactive and youthful energy, which contrasts well with Christina’s darker and more intense playing. Both Naughtons exude kinship with the music when they perform.

The works on the program varied in time period and style. The evening commenced with an excellent performance of Mozart’s Sonata in D major for piano 4-hands. The opening movement, Allegro, was crisp and well-executed, leading into the heartfelt and moving second movement, Andante. The sisters’ virtuosity became even more apparent during the final movement, Allegro molto.

The duo then performed the magnificent Allegro in A minor by Schubert, before moving to William Bolcom’s jazzy and contemporary Recuerdos. Chôro (Homage to Nazareth) was showy, fun, and brought attention to the sisters’ superb technique. Much of the magic of the Naughtons is witnessing their emotional and musical connection, which was nowhere more evident than during Paseo (à la mémoire de Louis-Moreau Gottschalk). One could barely tell where one pianist began and the other ended.

The Naughtons played two pieces by Bach with confidence to kick off the second half of the program. The Debussy renditions that followed were poetic, engaging, and expressive. The highlight of the second half of the evening was Chopin’s Rondo in C major - the sisters were perfectly in sync with impeccable timing and communication.

The final work of the program, Lutoslawski’s Variations on a Theme of Paganini, once again cemented the sisters’ technical skills. Their stellar musicianship begged the following question: why do world-class female musicians need to bank on color-coordinated outfits and “twin appeal?” Their tentative smiles in between pieces implied they weren’t thrilled about it either.

Nevertheless, the crowd unanimously adored the Naughtons last week. From Baroque to jazz-inspired works, the program included something for everyone. Christina and Michelle Naughton played the touching and whimsical last movement of Ravel’s Mother Goose Suite as an encore following several standing ovations.