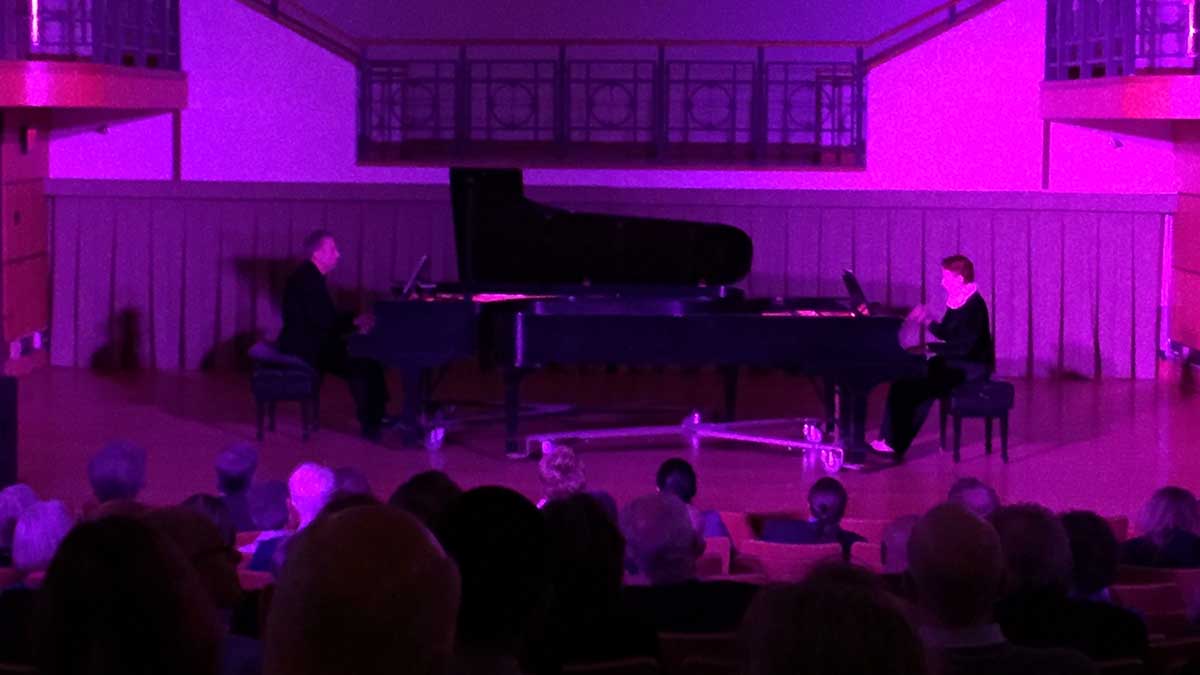 A Teacher and His Two Students with the Norfolk Chamber Consort

On Monday night, the Norfolk Chamber Consort presented the last concert of their 49th season, titled “Teacher and His Two Students,” at the Chandler Recital Hall. The evening focused on the works of Anton Arensky, and his two most successful students, Alexander Scriabin and Sergei Rachmaninoff.

Founded in 1969, the Norfolk Chamber Consort showcases chamber music from the 17th to 21st centuries. The group presents works with varied instrumentation, often incorporating pieces that are under-performed in our region.

Artistic Co-Director and performer Andrey Kasparov gave a 30-minute pre-concert lecture going over the program. It was enlightening to hear the history of every work, but it would have been easier for the audience to swallow and improved the flow of the concert had Kasparov provided this context in between pieces.

Chamber music is a collaborative art that demands cohesion and intimate communication. The majority of the evening met this expectation, but the opening number fell short. Cellist Jeffrey Phelps and pianist Oksana Lutsyshyn sounded lovely individually, but weren’t as in sync with each other as they could have been, particularly during the fast portions of the last movement, Humoresque.

Oksana Lutsyshyn’s rendition of Piano Sonata No. 2 (Sonata-Fantasy) in G-sharp Minor, Op. 19 by Alexander Scriabin was tenderly performed. Lutsyshyn and Kasparov created engaging light designs for both pieces by Scriabin due to the composer’s interest in multimedia. These designs were based on Scriabin’s descriptions of the colors he associated with different keys – their inclusion gave the audience an idea of how Scriabin experienced music.

The highlight of the first half of the program was the Invencia Piano Duo (Oksana Lutsyshyn and Andrey Kasparov). They brought bombastic energy to Suite No. 2 in C Major for Two Pianos by Sergei Rachmaninoff. The pair played the first movement, Introduction: Alla Marcia with a jubilant flair. Valse: Presto showcased their collaborative virtuosity. Moving and heartfelt, Romance: Andantino led into Tarantelle: Presto, which served as a bold and satisfying final movement.

Next up was Quatre Morceaux for Piano, Op. 25 by Anton Arensky. Pianist Andrey Kasparov played the entirety of the piece well, but the first and third movements stood out: Impromptu was performed with a beautiful sweetness, and Etude (on a Chinese theme) was slick and well-paced.

Tenor Brian Nedvin demonstrated excellent diction and dramatic conviction during songs by Rachmaninoff. However, several of the high notes sounded poorly supported, like they were sung from the throat. Before my window offered glimpses of a lighter, more “on the breath” sound, but the majority of the songs were sung with too much force. Despite issues with vocal production, Nedvin and Kasparov (who accompanied on piano) performed with superb articulation.

The world premiere of Kasparov’s arrangement for two pianos of Poème, Vers la flamme, Op. 72 by Alexander Scriabin closed the evening. The Invencia Piano Duo and this new arrangement made a lyrical, entrancing, and wonderful finale.

Despite a few difficulties, the Norfolk Chamber Consort offered a unique and mostly well-performed program. The group has several exciting events coming up in the fall that will continue their tradition of bringing rare chamber works to our area. Next is 1-2-3-4 Harpsichords, a concert in honor of Vernon A. McCart, on October 1 at the Chandler Recital Hall. Visit ncconsort.org for tickets and more information.