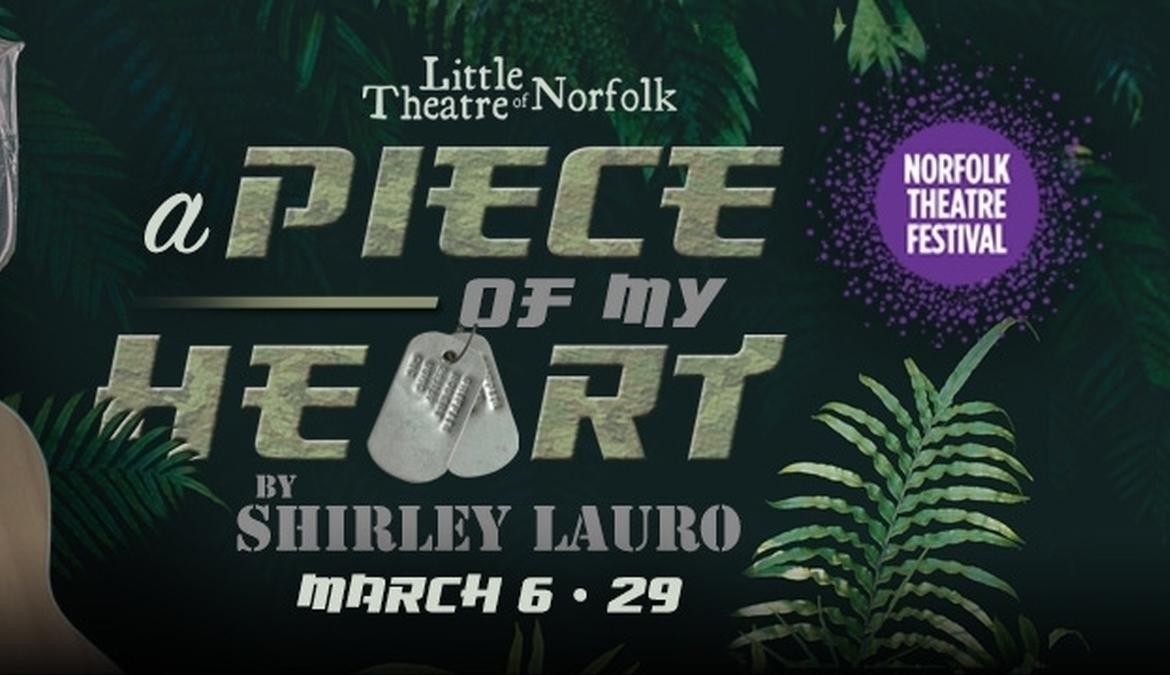 Arts Undercurrent: A Piece of My Heart at the Little Theatre of Norfolk

The Little Theatre of Norfolk presents “A Piece of My Heart,” a play inspired by the true stories of women who served in the Vietnam War, through March 29. Rebecca interviewed cast members Moriah Joy and Louise Casini Hollis, and director Kelly Gilliam about the play, why they got involved, and how it’s changed their perceptions of women in the Vietnam War.

For "A Piece of My Heart" tickets and more information, visit ltnonline.org.

Moriah (in character): “And the guy immediately comes out of the coma and goes, ‘Oh, gosh, where am I?’ And I think, oh, gosh, I did a miracle. I can do anything. I'll join the army. I'll save the world.”

Rebecca: Tomorrow night, the Little Theatre of Norfolk opens its production of “A Piece of My Heart” by Shirley Lauro, part of the second annual Norfolk Theatre Festival. “A Piece of My heart” is inspired by the true stories of women who served in the Vietnam War, narrated by five nurses and a USO singer. I spoke with cast members Moriah Joy and Louise Casini Hollis, plus director Kelly Gilliam about the play, why they got involved, and how it's changed their perceptions of women in the Vietnam War.

Kelly: I’m Kelly Gilliam. I'm the director. So, I was in the military, although I never made it to a war zone or was in the nursing field. These women kind of started their journey as I did, very naive, unsure of what you're getting yourself into, and the process that gets you to where you are now as a totally different person, sometimes better, sometimes worse, sometimes just adjacent from...everything.

Rebecca: Actress Moriah Joy, who plays Sissy, spoke a little bit about why she auditioned for the show.

Moriah: So often, theatre's focused on the men in the community and building them up, and we really need to take women and put them to the forefront. The wall that is dedicated to the Vietnam vets in D.C., out of the 58,000 names that are up there, only eight of those names are women.

Rebecca: The cast of “A Piece of My Heart” hopes to share these untold stories. Louise Casini Hollis, who plays Whitney, talked about her personal connection to the show.

Louise: My father served in Vietnam. He was in the last draft of Vietnam. As a child, I used to ask about it and people never would really want to talk about Vietnam and they'd say, “It was terrible. It's awful.” So when I went to college, I took a class in history, American history, that took 1877 to present, and even then, I didn't know that there were more civilian women serving in Vietnam. My character served with the American Red Cross and their duties were to be morale, basically, so to bring a little piece of home to the soldiers, but they saw a lot of the blood and guts, which they were not prepared for, of course. My character goes through two weeks of training to go off to Vietnam, which is really not a lot, I think, to prepare you for a war zone.

Rebecca: So have your perceptions changed since you started rehearsing the piece on the role women played in the Vietnam War?

Moriah: It's kind of ironic, because I feel a really strong connection to my character. The beginning monologue that she has is: I didn't know anything about Vietnam. I wasn't into anything. I just wanted to go out and I wanted to help people, and that was kind of where I came to with this show. I had no idea how involved the Vietnam War was and how many lives were lost in general, let alone with the women.

Kelly: For the younger generation today, you've not known a time where there wasn't a conflict in America or in the Middle East, and you also probably don't remember women not having a position of power and having a voice. You know, in the 70s and 80s, it wasn't a thing. In this show, giving these women a voice that they didn't necessarily have at that time has been very important to me.

Rebecca: That was Kelly Gilliam, Louise Casini Hollis, and Moriah Joy from the team of “A Piece of My Heart,” a play about six women and their lives before, during, and after the Vietnam War. “A Piece of My Heart” opens tomorrow night at the Little Theatre of Norfolk, and it plays through March 29th.