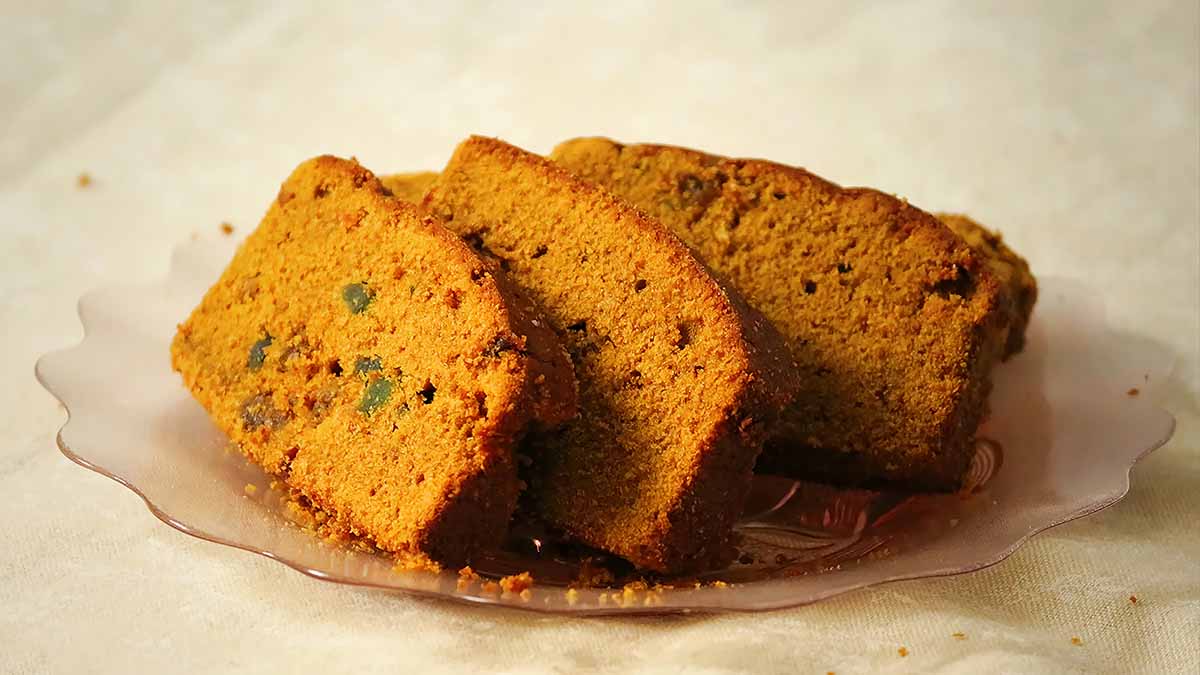 Photo by Prince Abid on Unsplash.com

Writer's Block: Message in a Fruitcake

Every year as Christmas draws near, I am reminded of one of my family’s unique stories involving a traditional ingredient of the season, the eternal holiday fruitcake. Each year I have full intentions of sitting down and recording this memory, but somehow the whirlwind of activities leading up to December 25th consume the time and energy needed to bring this task to fruition. This year is no different, as the demands of holiday preparation are certainly no less than in years past, but I somehow find the desire to share this story and bring new meaning to an old tradition more important than being able to cross off every item on my “ need to do” list.

You see, like many people, I too have wonderful family memories of my mom or grandmother in a kitchen filled with the warmth and love of the season and the heavenly aromas of holiday baking. The traditional fruitcake always took center stage as the leading star in an impressive production, which assembled an extensive cast of holiday treats. Hours were spent preparing the many ingredients needed to go into the batter long before the cake was ever placed into the oven. I personally don’t know how the fruitcake became the culprit for so many fruitcake jokes. Sometimes just the mention of the word “fruitcake” brings down the house with a multitude of humorous stories, which personifies the cake into taking on a life of its own. Defying supernatural laws, this amazing cake has been known to outlast any other baked goods life expectancy. I imagine that it is probably for the best that some phenomena are not to be understood. Certainly, this would be one of those instances.

This fruitcake story has a different twist. Its ingredients do not bring to mind memories of warm family gatherings, abundance of food and drink or any other pleasure one normally associates with the holiday season. In fact, it’s about just the opposite. This story is about a young soldier, far from home, far from the family who loves him, perpetually hungry and cold, sometimes feeling frightened and alone, fighting for his country on foreign battlefields in Europe during World War II. This soldier was my father, Staff Sergeant Cary L. Jarvis, who served as a forward observer in the 29th Division, 111th Field Artillery Battalion, and who was among the first soldiers, on the first wave, to go ashore and land on D-Day at Omaha Beach. He was one of the fortunate ones who lived through this massive invasion, which was critical in changing the course of the war. He holds the distinct privilege, unlike many good men who lost their lives that day, of being able to share and help document through his stories, this most important time in our country’s history. His stories are filled with tragedies of war, uncomprehendable loss and sadness on every level one could imagine, struggles of survival, but most of all pride in triumph and victory for the country he loved and served well. I have come to appreciate these stories, and the courage of the man who tells them, more and more as I grow older. I realize how significant and life changing this period was in my father’s life and how it affected everything, for everyone involved, forever.

Not all of my father’s war stories though are sad. Some are actually very humorous, as my father is quite the storyteller and possesses a strong sense of wit. They are about comical situations, lasting friendships, mischief, lighthearted happenings, romance, colorful characters and just good stuff, which somehow finds itself ironically woven into the overall tapestry of war. I would say that the fruitcake story falls into this latter category, and with this being said, will properly try to set the stage for this holiday story.

In 1939, at the age of seventeen, my father was approached by a couple of his buddies who had recently joined the Virginia National Guard. They were full of exciting tales of fun and games had by all on their weekend training retreats. Camping out in real tents, plenty of food, smart looking uniforms, driving big trucks, playing war games and a pay check at the end of the month for having all this fun. My father’s head must have been spinning from the pictures his friends had so enthustically painted, and with times being hard for most, it must have sounded particularly grand. My father was bent and determined not to miss out on such a good thing and was ready to go sign up right then and there. The only thing that stood in his way was the small detail that you had to be eighteen to enlist, and my father missed that requirement by one year. Being large for his age, and with nothing to loose, he went down to the recruiting station and when the Battery Commander asked him his age, he confidently lied, “eighteen sir”. With no proof required, he was promptly issued a uniform, given a robust slap on the back, was officially inducted into the Virginia National Guard, and so began his military experience.

His weekends of training were going well enough, and as a youngster he was enjoying the excitement of exposure to new things and new people. In February of 1941, the National Guard was inducted into the Federal Service, which translates into “your in the real army now son!” At that time, my father had one year left in training and was slated to be released at the end of that year. But alas, during that year, on December 7, 1941, Pearl Harbor was attacked, and soon after that my father found himself aboard the Queen Mary in route to England for the duration of the war. His weekends of playing war at National Guard training camps, were quickly transformed into what would be three years of life quite different from anything he could have imagined.

My father spent three years in Europe fighting a war, which transformed his world. In combat, his display of leadership and courage earned him the battlefield commission of Second Lieutenant, which assured his membership in the prestigious National Order of Mustangs. My grandmother had a small discolored photo which my father sent to her shortly after arriving in England, which shows him down in a freshly dug foxhole, with shovel in hand, wearing a big smile. On the back of the photo he had written “ my new home”. I cry to think of how my grandmother must have felt having her son so far away from her. During this time, my father would receive many letters from home. One letter from home would tell him that his only brother, Douglas, two years older than he, had died from complications during an unexpected heart surgery. He received the letter after his brothers funeral. He would also receive a “Dear John” letter from his sweetheart and fiancée, breaking off their engagement and announcing her upcoming marriage to someone else, which I am sure devastated him greatly. This letter prompted one of the only letters he received from his own father during the war. His father’s message to him, though short, was meant to give his son encouragement, through what he knew was a most difficult time. In it he said, “Son, don’t worry, there are many pebbles on the beach”, and I guess that was about all he had to say about that.

Several Christmases came and went while my father was fighting in Europe. Around each holiday season, he would receive a package from home, which would contain one of his mother’s special festive treats, a fruitcake. The cake, adorned with fruits and nuts, was a tangible connection to home, and a treasured memory of holidays spent with the ones he loved. The cake arrived housed in the same pan in which it had been baked, and he would take a slice for himself, and then share the rest with the other men in his unit. After long months of K-rations, I am sure this must have been quite an event. His mother instructed him not to worry about returning the pan, but he always carefully packed it back up and sent it off for home, not knowing if it would ever actually make it or not from his position out on the battlefield. The pan, which crossed the ocean once, would now cross it again back to its sender. Letters were sometimes slow to find their way home because of censoring, and often the pan would show up on his parent’s front porch first. The unspoken message it would carry to them when it arrived would be “I am still alive” and they would take hope, and have great joy that their son was still alive some short time ago. That fruitcake pan made its way back and forth across the Atlantic Ocean six times while my dad was fighting in Europe. With each journey, it carried the gift of love to my father, so far away from home, and the gift of hope, back to his parents, who were anxiously awaiting some sign that their son was still alive.

Thirteen years after writing this story of “Message in A Fruitcake”, I am sad to say that my father passed away in the spring of 2016, fifteen days after his 94th birthday.

Although the years had slowed him down, his drive and love of life never wavered. He stayed fairly active, even with many health issues. He never turned down a fishing trip! Never!!! He still tinkered with his hobby of restoring Model A cars with the help of my brother Walter, as well as gardening, cooking, baking, canning, preserving the bounty he grew and sharing with family and friends. He baked many fruitcakes between Thanksgiving and Christmas each year using his mother’s recipe. Lucky was the person who received them as gifts.

Some years ago, my father presented me with his mother’s fruitcake pan, which is now well over 100 years old. If pans could receive a “Purple Heart”, from being injured in battle, this one certainly would. It is a little beaten and worn with a crack around the rim, and although it is still able to bake a pretty mean cake, it has earned a most honorable and peaceful resting place in my kitchen hutch. I treasure it greatly as a significant part of my father’s time as a soldier, as well as for the message of love and gift of hope it sent family members so far apart. This Christmas, if you receive that traditional holiday cake, think more about the message it sends and appreciate your love ones being near. Merry Christmas!

Cream butter in bowl, add sugar, put eggs in one at a time and beat well. Add flour slowly, beating well, add a dash of cinnamon and a dash of nutmeg, place dates, fruits and nuts into a bag with flour, shake to coat. (Keeps items from settling to bottom of pan.)

Grease pan with Crisco and line with brown paper bag cut to fit pan. (Cut a circle with hole in middle for bottom of pan, and strips to line sides of pan.) Grease both sides of bag well. Spoon batter into pan, decorate top with ½ pieces of Pecans, English walnuts, whole cherries and pineapple pieces. Bake approx. 2 ½ hours at 250 degrees. Check with straw to make sure done in center. Enjoy! 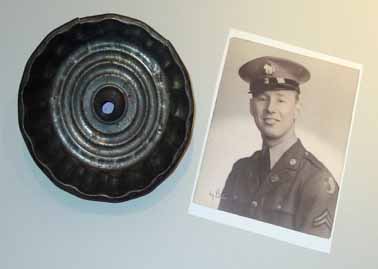