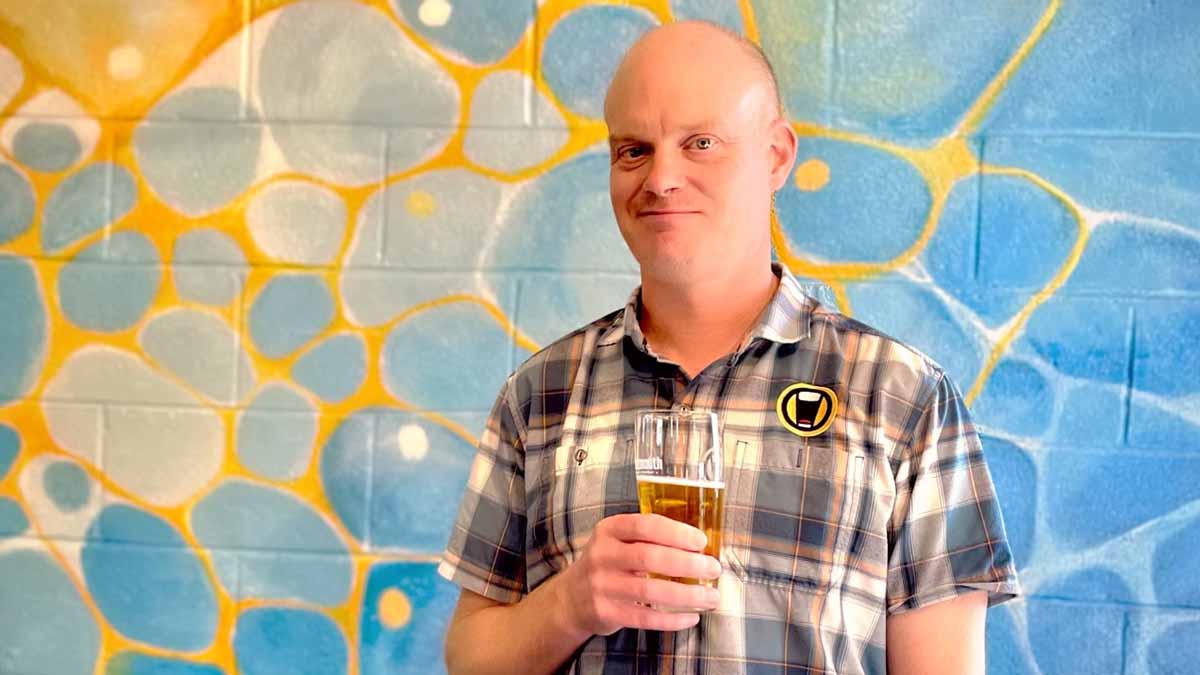 For the Time Machine Radio Network Launch Party, we partnered with local craft brewing company Smartmouth to develop a limited-release beer. We recently sat down with Porter Hardy, the founder and president of Smartmouth, to learn more about this Norfolk lawyer-turned-brewer and how he got started making beer.

You initially had a career as a lawyer, what led you to make the leap to running a brewing company?

Get your limited edition Time Machine Strawberry Fields Beer before it's gone.

As a lawyer, I helped other people start, buy and sell businesses and realized one day that I wanted to be on the other side of the table. I wanted to create something. At the time, my favorite hobby was home brewing beer. My wife, Kim, had gotten me a kit the year I started as a lawyer and it had become my favorite hobby and what I would read and think about. I loved the blend of art and science in it. So, once I decided I wanted to go out and create something new, a brewery was a natural fit for me. There weren’t many breweries in our area then and I found a group of people who wanted to invest in and be a part of a brewery. So, it all just came together.

How did your interest in beer begin?

I really began to see the possibilities of beer and take it seriously when I studied in Germany for a semester. During law school, I participated in an exchange program where Kim and I lived in Hamburg for about five months. During this time, we traveled Europe on the weekends and got to sample a wider variety of beer than we had experienced in the US. That experience really got me thinking about beer being something more than the mass market beer I had consumed prior. The nuances and history of it were very tangible when you got to visit the towns where a style was invented or eat the cuisine that was traditional with a certain style of beer.

What were your aspirations for Smartmouth? How has it grown and changed since it began?

When we first started, I hoped Smartmouth would sell throughout Virginia and maybe a little in the Mid-Atlantic. I didn’t want to send our beer too far but wanted to focus on our local area. That has held pretty true. The biggest shift from the original plan was the legal change that allowed breweries to sell beer by the pint directly to the customer. We had only planned to be a brewery that made beer to distribute and be sold in restaurants and grocery stores. This was a huge game changer and now we have two tasting rooms in Hampton Roads, and it is a huge part of our business and has brought me a lot of joy to be able to engage in our customers directly.

What can you tell us about the limited release Strawberry Fields beer created for WHRO Public Media?

I’m really excited for Strawberry Fields and so thankful for the partnership with WHRO. This beer is a Gose, which is a German-style sour. It is tart but the addition of strawberries will balance the tartness with sweetness. We only use real fruit in our beers which gives them a certain complexity. The name came about from the WHRO crew and is a shout-out to the new Time Machine radio station. I am sure it will be playing some Beatles!

How long have you been a listener to WHRO’s stations?

I’d say since 2004. When I moved back here after law school, WHRO became part of my commute. Morning Edition and All Things Considered got me to and from work and kept me up to date on the world. If it was lunchtime, I’d always try and catch Cathy Lewis. In fact, Cathy had me on her show one time and it led to one of the more surreal experiences I’ve ever had. We recorded the show and then a couple of weeks later I ran out to the bank at lunchtime. I turn on the radio and hear myself coming through the speakers. Crazy! I can still remember right where I was when that happened.

What do you enjoy most about our radio programs?

I love the mix of national programming like All Things Considered, Marketplace, This American Life, etc. with local programming. I’ve already mentioned Cathy, who’s now retired, but Jae Sinnett and Paul Shugrue are other favorites of mine. You get the best of both worlds.

What is your favorite decade or genre of music being played on Time Machine Radio?

Oh, that’s hard. I love the ‘60s and ‘70s rock like Jimi Hendrix and Led Zeppelin but also love the blues and jazz of the ‘50s and ‘60s from artists like Miles Davis, Art Blakey, Howlin’ Wolf and BB King.