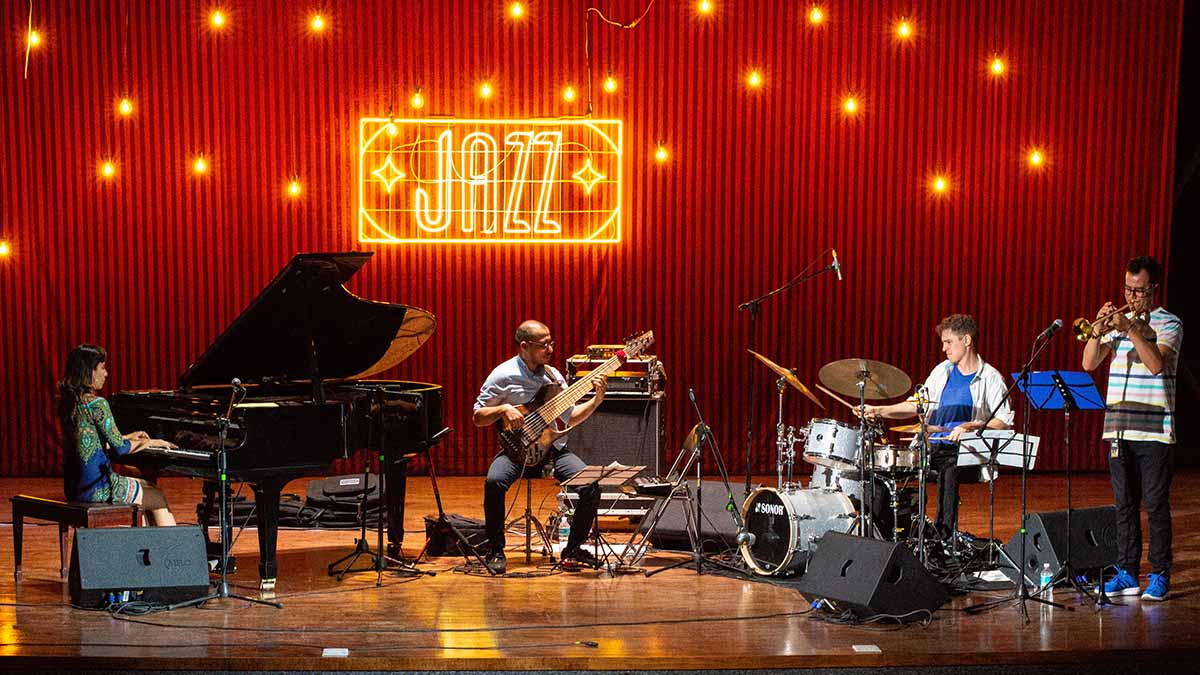 All That Jazz: Talking Music With WHRV Hosts Jack Frieden and Jae Sinnett

Jazz has a rich history and is celebrated daily on WHRV. Since 1979, public radio in Hampton Roads has featured jazz as a part of its programming. Many legendary artists have visited the WHRV studios through the years. Yet jazz is sometimes a misunderstood genre.

Jack and Jae are both appearing as panelists at the upcoming Vocal Jazz Summit at Zeiders American Dream Theater (April 8-10). Learn how to attend.

We recently caught up with our two popular jazz hosts, Jack Frieden and Jae Sinnett, to talk about their programs and why they love introducing people to this incredible music. We also learned some interesting things about how they got their start. Can you guess which one started in radio by creating short programs at home for a loved one? Or which one visited the station to register a complaint and walked away with a job offer?
Check out our conversation below.

How were you introduced to jazz music?

Jae: I first heard jazz in my home growing up but I didn't know it as jazz. My mother or grandmother would play it occasionally. I remember being intrigued with jazz in movies and on TV because I thought the drumming was sophisticated. Actually all of the music was but it wasn't until I was in high school when I started to consciously connect to the music. Some of my friends and I would have jazz listening sessions. Mostly jazz fusion. Then later, bebop.

Jack: I was initially introduced to jazz in the early '70s living post college in the Washington, D.C., area. I was already very into music and D.C. had a very vibrant jazz and pop/folk/rock scene. A co-worker of my wife’s knew we were into music and suggested that we listen to some great music coming out on CTI records. Records by Stanley Turrentine, Freddy Hubbard, Paul Desmond, and Bob James created a pathway for me. The interest in jazz vocal music was a natural progression of my deep love of the vocals of The Beach Boys, Crosby, Stills, and Nash, The Beatles and other vocal oriented rock groups. I also had a deep interest in folk music – which exists to this day.

What do you love about jazz music?

Jae: I love the range of musical possibilities with jazz. It's not as musically predictable as pop, rock, soul, funk or country. It's incredibly sophisticated and complex but at the same time deeply practical. Jazz is also the only music that's played the way it is...with the swinging rhythm and with the level of improvisation which parallels the written or the composed. I love the interactive nature in how the musicians play and compliment each other. That's a style all it's own connected to jazz. The genre also introduced the drumset to the world so, of course, I love the music. Ha!

Jack: I particularly enjoy the creativity that goes into taking a standard that has been done many times and hearing someone individualize their interpretation. I can listen to a great jazz pianist play for hours. And I admire the spontaneity of musicians improvising and playing together.

What misconceptions do you find that people have about jazz music?

Jae: That it's some sort of fun party time jam music. As if the musicians are just playing whatever they want and see what sticks. This of course attempts to diminish the incredibly artistic qualities of the music. Jazz is fun but it's also serious art music. You have to study for years to play it effectively. Or teach it. Like with symphonic musicians. It's a lifetime study to get good and to play the music at a high artistic level, but it's always easy to be dismissive of things you don't understand.

Jack: I think in some ways jazz is its own worst enemy. Too often when jazz is showcased on television it is in the form of rousing jam sessions with horns blaring. It might be great music, but it won’t bring new fans to jazz. To me one of the challenges and opportunities of doing a program like The Vocal Sound of Jazz is opening the ears of non-jazz fans by presenting the music in a way that will catch their attention and motivate them to want to explore more. The web and streaming services make that so easy to do.

How did you get into radio?

Jae: On a fluke. I came over to complain to the legendary station manager at the time, Vianne Webb, about what I was hearing on air with a particular announcer who has since passed. I wasn't looking for a job. Somehow in that conversation it turned to a discussion about the "new 89.5 signal." I was offered the position because she saw and heard something in me. I had to prove I could do it, and needless to say I was stunned. Vianne wanted me to learn about broadcasting the way she did--put you in the hot seat. Crash and burn a few times and if you survive and find YOUR voice, then you're on your way. Ha! Many naysayers I've encountered over the years, but they have no idea really how they actually help to fuel my drive. I'm that way. Now 32 years into it with much success, I proved her right.

Jack: I grew up in Hampton Roads. As a teenager in the '60s, WGH AM and WNOR AM were important parts of my life. I loved Gene Loving and Dick Lamb at WGH (and am a great admirer of their later success and continued friendship). When I moved to D.C. after college at University at Georgia the exposure to WHFS, a truly progressive radio station, and WMAL-AM’s legendary DJ Felix Grant (who introduced me to many jazz vocalists) motivated me to start producing these rudimentary one -hour radio programs for my wife to listen to. I called the program “Pet Sounds” (a nod to my love of Brian Wilson’s music.) In the late '70s, I was hired to write a monthly music column for “Metro Magazine” based in Norfolk. One of my columns was directly critical of WHRO’s programming at it was 90 percent classical at a time when we already had a full-time classical music station WGH-FM. I felt as a public radio station WHRO was not properly serving the public as it offered no jazz or alternative music. Shortly after the article was published I got at call from Joel Seguine, who was WHRO radio’s general manager. He told me that they agreed with much of my article and that the station would soon be making some changes. I said, “If you do, I have an idea for a vocal jazz radio program.” About a year later my phone rang and Joe Lowrey, who had been hired to start WHRO’s jazz programming, offered me the opportunity.

What excites you most about your job in radio?

Jae: I get to feature jazz, teach and entertain folks playing this extraordinary music. That's the core mission of public broadcasting. I haven't forgotten that part and it's also a primary reason folks contribute to my show...what they learn. That's what really excites me. The connectivity I have with the audience.

Jack: Very simple answer here. The opportunity to expose so much music that deserves to be heard to a wide audience.

Tell us about your show. What is your mission with the program?

Jae: My mission is more about what I believe is the mission of public broadcasting. Teach and enlighten. It gave jazz a home. Classical too. That's significant and I respect and value that mission. I hope that my show enlightens lives and uplifts. Everyone doesn't like jazz, but with those that do I can take them to special places. I can introduce them to new extraordinary talent. I can give them a reason to appreciate and enjoy this great music.

Jack: The mission of my program is what I expressed above that excites me. My show is an hour each week totally dedicated to jazz vocal music. I firmly believe that jazz vocal music can serve as a gateway to more people exploring jazz in general. Audiences (live and on radio) more widely relate to vocalists. From the beginning of doing my show I have tried to show the variety of jazz vocal music that is out there. I also love to be able to showcase jazz vocalists interpreting more contemporary music. I feel too much jazz radio concentrates on jazz history. I approach programming my show emphasizing that jazz vocal music is a living, breathing artform that continues to move forward. I do this by emphasizing new releases, up and coming vocalists, etc.

You are both panelists at the upcoming Vocal Jazz Summit. What made you want to get involved in this event?

Jae: I was asked and it seemed like something that I could be involved with and make a difference. We get to share our thoughts on the music. Any chance I get to bring more into jazz I'm game.

Jack: I love to talk about jazz vocal music, radio, and music in general. The opportunity to be on a panel and exchange ideas and opinions with Jae (who like me has strong opinions) is something I look forward to.

What do you hope people take away from the summit?

Jae: I hope folks come out with a new found appreciation for the music. A better understanding. I also hope that we can stimulate some curiosity and perhaps bring more into the jazz fold.

Jack: Many things. The opportunity to hear so many talented singers perform right here at Zeiders, which has fantastic acoustics and venue site lines. The opportunity to meet so many people who share my love for jazz vocal music. And just the thought of having three days dedicated to what I have spent 40-plus years dedicating so much of my musical life to.

What do you most want people to know about jazz music?

Jae: It's a fine art music. It's also America's indigenous art form and was recognized by Congress as a National Treasure. It's also performed by some of the greatest musicians around the world. It's also a fun music once you get through the basics of how to listen to jazz. It's not played like any other music, so it's unique and original. Soulful and evolved out of the blues.

Jack: My answer will sound trite. I want them to know “Jazz is Alive,” while most of the legendary stars of jazz have passed away there are so many talented vocalists and players out there that are worth exploring and seeing play live.

The Vocal Sound of Jazz with Jack Frieden is heard Saturdays at 10 p.m.

You can also stream the shows online or through the WHRO app.