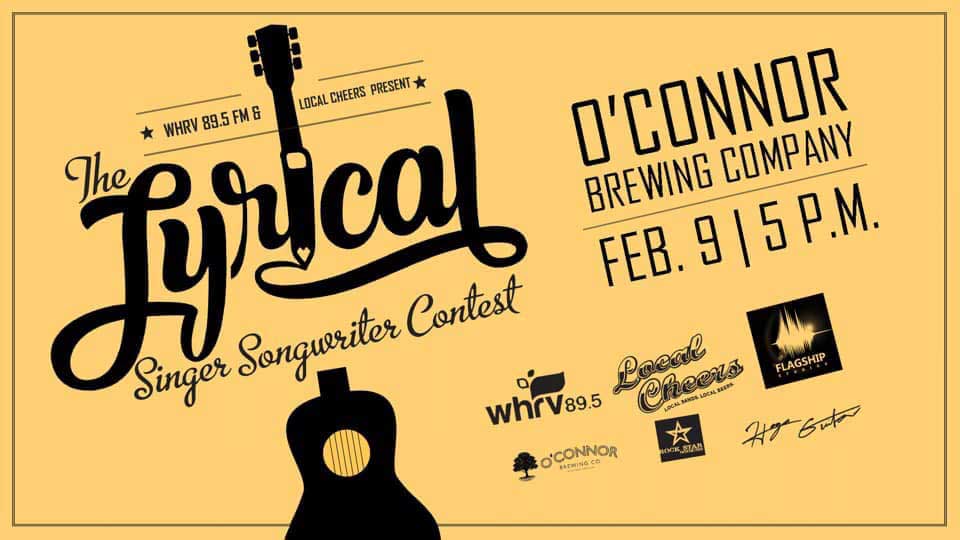 Please join us for an evening of original music and song at O'Connor Brewing Company. Ten finalists from the Lyrical Singer/Songwriter Contest will present their work to a panel of trusted judges, and you--the audience! Event is free, registration is required.

Learn more about the contest.

Listen to past episodes of Lyrical.

Here are the top 15 entries!

Nan MacMillan has travelled and lived in America’s north, south, east, and west, and her music and lyrics encompass and imitate the landscapes of each. Raised in the suburbs of Boston, Massachusetts, she began songwriting and playing guitar at 12 years old, where she performed in local coffee shops and restaurants. She then spent four years in Ojai, California where she went to high school and continued writing and performing. Some highlights include recording a demo CD in Nashville, performing at Old Settler’s Music Festival in Austin, Texas, and recording a single in the home studio of Academy Award winning film composer James Newton Howard. She then relocated to Charlottesville, Virginia where she attended University of Virginia and graduated with a double major in Poetry Writing and Music. After graduating, she moved to Valencia, Spain and completed a Masters in Contemporary Performance and Production through Berklee College of Music. As a songwriter, her lyrics are rich and complex, rooted in natural imagery that reflects the changing landscapes she’s seen throughout her life.

Lena Klett is a Jersey raised singer/songwriter, currently living in Norfolk, Virginia. As the daughter of two musicians, she started playing guitar and singing at an early age. Her original compositions are influenced by a variety of genres including folk, alt-rock, indie, blues, soul, funk and reggae. You may see her performing solo acoustic shows around the Tidewater area, or rocking out as the front-woman of her band “Lena and the Light”. Her power-house vocals and meaningful melodies are sure to captivate any audience.

Dustin Furlow is a 25-year-old singer/songwriter native to Southeast Virginia whose playing and songwriting reflect a clear emphasis on the earthy, intimate sound of today's contemporary folk artists. With equal respects to songwriters such as Gregory Alan Isakov and virtuoso guitarists like Tommy Emmanuel, Furlow eventually carved out a sound that became distinguishable by it's complex guitar-work and warm, home-spun lyrics.

Hannah Jai is an 18-year-old singer/songwriter based in Yorktown, Virginia. She was born in San Antonio, Texas and has lived in Pensacola, Florida and Spokane, Washington. Hannah started writing music and taught herself guitar when she was eleven. During this time she decided to pursue music as a lifelong career. She considers her sound to be “folk/pop.” Also, she serves on the worship team at Coastal Community Church in Yorktown and Gloucester, and helps lead music on Wednesday nights at her youth group. In addition to serving at church, she plays at local farmer’s markets and other venues around the area. You can find examples of her music on YouTube at “HannahJaiMusic” and follow her on Instagram, Twitter, and Facebook at “HannahJaiMusic.”

Jarvis Griffin always loved the songs of others. He began singing gospel music in his father's church. He was introduced to choral singing in high school. In college days his appreciation of songs expanded to the soaring vocals of house, musical theater and opera. In the last several years, Jarvis hit the open mic circuit as the singer in a few acoustic duos around Hampton roads where he became acquainted with folk and rock. Jarvis ended up finding a home singing lead vocals in his band, Paper Aliens. With the band, Jarvis discovered the ability to bring together music and lyrics to form songs of his own.

Virginia Beach native, EAYAES ("E-ESS"), real name Dariel Clark, has been crafting his style of music for over ten years and has been actively performing since February 2011, starting with the open mic scene. In his own words, "hip-hop soul with a jazzy-punk attitude and a buncha other shit," is the best way to describe what he's got going on. With a vast array of influences, EAYAES' sound is something foreign, familiar, enigmatic, and relatable all at once. Be on the lookout for his upcoming EP, soon to be released this spring.

From the start, entertainment has been important to Zach Jones. At age 10, he wanted to be an actor. Movies not only provided an escape but also taught him the value of a good story. Years later, Zach's exposure to musicians like Elvis Costello, David Bowie and Leonard Cohen inspired him to tell provocative stories through song. Zach's lyrics emote a level of vulnerability by challenging the expectation of “what good art should be." Even if the notes don’t hit where they’re supposed to - it’s sincere. "To be human is to be afraid or unsure about daily obstacles” says Zach, “And I find it refreshing when a protective facade is lifted. Only then can we express our common flaws and ask ourselves why we do the things we do.” Creating a space for raw emotions is a priority for Zach. He hosts a the bi-weekly Open Mic at Colley Cantina where he invites performers of all kinds to voice their truth and display their talents. “I think it’s important to provide an atmosphere that encourages potential acts to leave their comfort zone and to not be afraid of failing. That’s how you become resilient. That’s how true growth begins.” You can follow Zach and his Open Mic on instagram @cantina_openmic.

Drew Lopenzina describes himself in one of his songs as "a bard of contradictions, a philosopher in jeans, I'll sing a song to break your heart but can't tell you what it means." He has performed for many years in many different bands and venues and has long believed in the power of song to open hearts, challenge perceptions, and unite people in troubled times. He currently plays in the folk duo Serious Black and is a professor of English at Old Dominion University.

Adam Hanson has been writing and performing music locally since age 15, after growing up idolizing his older brother's bands. He bought the first guitar he was proud of with his Bar Mitzvah money, and counts himself lucky to have been able to create music with his best friends since that time. He works as a licensed therapist, and resides in Norfolk with his family, in an old house that is slowly sinking into the ground.

John Harrell is a Virginia native, hailing from Newport News. He met his bandmate and accompanist Kevin in 2003 when they both played in local bands Born Standing and Second 2 None. They have written and performed original music since then and have recorded several tracks together. In 2006 John took a break from band life to focus on his family while still performing solo acoustically. It would be 12 years before John and Kevin reunited on stage. Their time apart did not stall their creative friendship, but this time around the songs were more reflective and veered into country, soul and blues territory. And that brings us to today.

Originating from the rocky hills of Pennsylvania, Jessica Scheck has been exhaustingly involved in creative endeavours for as long as she can remember. It took many years of childhood head rocking before she realized she had a wire crossing called chromesthesia, which pairs music with personal experiences of colors. She makes friends with other peoples’ pets in her spare time, surveys the city of Norfolk through running, and loves healthy foods (I still love you, chocolate!). She’s very grateful for this chance to improve her songwriting skills, but is most thrilled to be tied into the creative tapestry of Hampton Roads.

Kate Stedelbauer is a Virginia-based singer/songwriter. Her musical influences include John Prine, Kacey Musgraves, Joni Mitchell, and many other artists and songwriters in the Americana, country and folk genres. Beginning to play guitar and write songs at age 10, Kate crafts musical stories that are lyrically rich, painting clear pictures of the highs and lows of life. Matched with memorable hooks, her songs evoke personalities and places that invite the listener to find a bit of themselves within. Kate performs regularly throughout southeast Virginia, and has recently started playing in Nashville. Kate has released two EPs of original music, Mississippi and The Acoustic Soul Recordings, which are both available on digital streaming services.

Holly Kirsten comes to us from a fourteen year stint in Nashville, TN, where she studied Music Business at Belmont University. After lending her vocals, violin, piano and various instruments to several Tidewater area bands, she is now gaining recognition as a performing singer/songwriter with a unique and powerful sound of her own.

Born and raised in rural Oklahoma, Mike P. Ryan's humble roots and keen eye for detail help him craft songs full of vivid images that have been described as “honest portraits of real people painted on a canvas of beautiful music.” Mike has won a host of national and international songwriting awards including the First Place/Grand Prize Award in this year's Mid-Atlantic Song Contest. Based in Northern Virginia Mike performs at music venues, folk festivals, and songwriting showcases nationwide. His debut album, American Tales, was released in 2015. His follow-up album At Home In The Darkness was released in November of 2018.

Joshua Purnell, songwriter/ songwriter. Norfolk native. “I just sing what I feel.” Joshua fell in love with music at a young age while listening to his Dad’s Motown records and has been singing for as long as he can remember. Things started to come together after he bought his first guitar, Amos. He began channeling his thoughts and emotions into songs, never expecting them to leave his bedroom. Before long, he was baring his soul at open mics and playing gigs. “ I just wanna keep sharing my music in the hopes that it touches whoever is willing to listen.” To hear more of Joshua Purnell’s music, check him out on any music platform; Spotify, iTunes, Google play, etc.