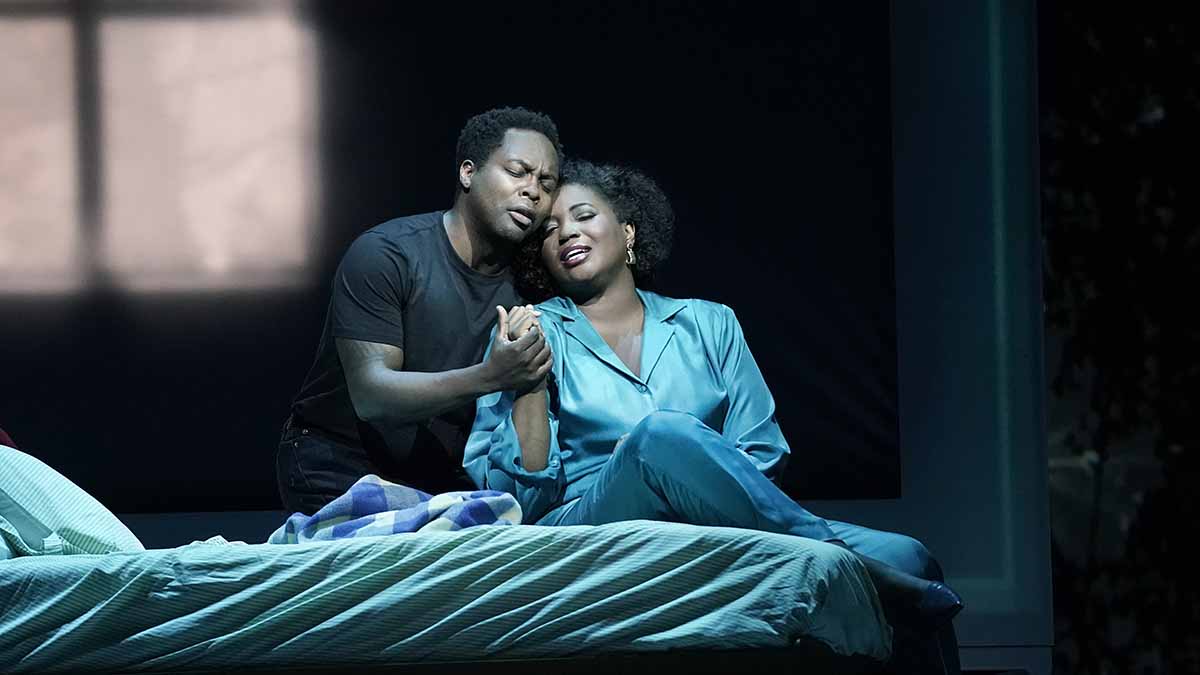 Will Liverman as Charles and Angel Blue as Greta in Terence Blanchard's "Fire Shut Up in My Bones."

After a year of closed doors, furloughs, tense negotiations, and much unrest, the stage of the Metropolitan Opera is finally alive once more. I am so excited to get back to hearing live opera on Saturdays. This season we get four Met premieres, two new productions, two versions of The Marriage of Figaro, and an opera taking place in the rust belt! Here’s a look at some of this season’s highlights.

The broadcast season begins with an anticipated Met premiere. Matthew Aucoin’s Eurydice, which was supposed to premiere at the Met last year, will kick us off on December 4. Erin Morley stars in the title role. This take on the classic myth of Orpheus and Eurydice brings a different perspective on the tale. Instead of following Orpheus as he descends to the underworld, we follow Eurydice. This opera premiered at LA Opera in 2020 with much success.

The broadcast on Christmas Day will be a history of Verdi’s Aida at the Met, in celebration of the 90th anniversary of Met broadcasts and the 150th anniversary of Aida. It will feature highlights of various recordings from over the years, rather than a full performance of the opera. We celebrate New Year’s Day with a broadcast of Massenet’s Cinderella in an abridged version in English. That brings us to a highly anticipated opera in early 2022: Terrence Blanchard’s Fire Shut Up In My Bones, the first opera by a Black composer to be performed at the Met, will be our broadcast on Jan. 8. You may be familiar with his film score music such as Malcolm X and the HBO documentary about hurricane Katrina, When the Levees Broke: A Requiem in Four Acts. The opera world has been buzzing about this premiere, and the performance also has a local connection: it stars Governor’s School for the Arts alum Will Liverman as Charles, a character who tries to overcome a life of trauma. With a score by Blanchard, a Grammy award winning composer and jazz musician, this broadcast will bring something entirely new yet familiar.

On March 26 we will have a broadcast of Verdi’s Don Carlos premiering at the Met. This will be the first time the full five act version in French will be performed there. Matthew Polenzani will star as Don Carlos opposite Sonya Yoncheva as Élisabeth de Valois. We will get to hear Nadine Sierra tackle the title role of Donizetti’s Lucia di Lammermoor on May 21 in another new production at the Met. Instead of Scotland, though, this new production will take place in the American Rust Belt in present day, so those of you seeing this broadcast at the theatres will have to let me know how that works out. On June 4 we get our last premiere of the season with Brett Dean’s take on Hamlet, which had its world debut in 2017 at the Glyndebourne festival. It will star Allan Clayton in the title role, with Brenda Rae as Ophelia.

Our broadcast season ends on June 11 with Stravinsky’s The Rake’s Progress. This dark-humored comedy, loosely based on the painting series of William Hogarth, will star Golda Schultz as the incorruptible Anne Truelove, with Ben Bliss as Tom Rakewell, and Alice Coote as the famous bearded lady, Baba the Turk. In between we will get to hear lots of favorites: La Bohème, Verdi’s Requiem, Die Meistersinger von Nürnberg, The Marriage of Figaro, and many more. As always I will be joining you from the booth, and I can’t wait to hear what this upcoming season will hold in store for us!