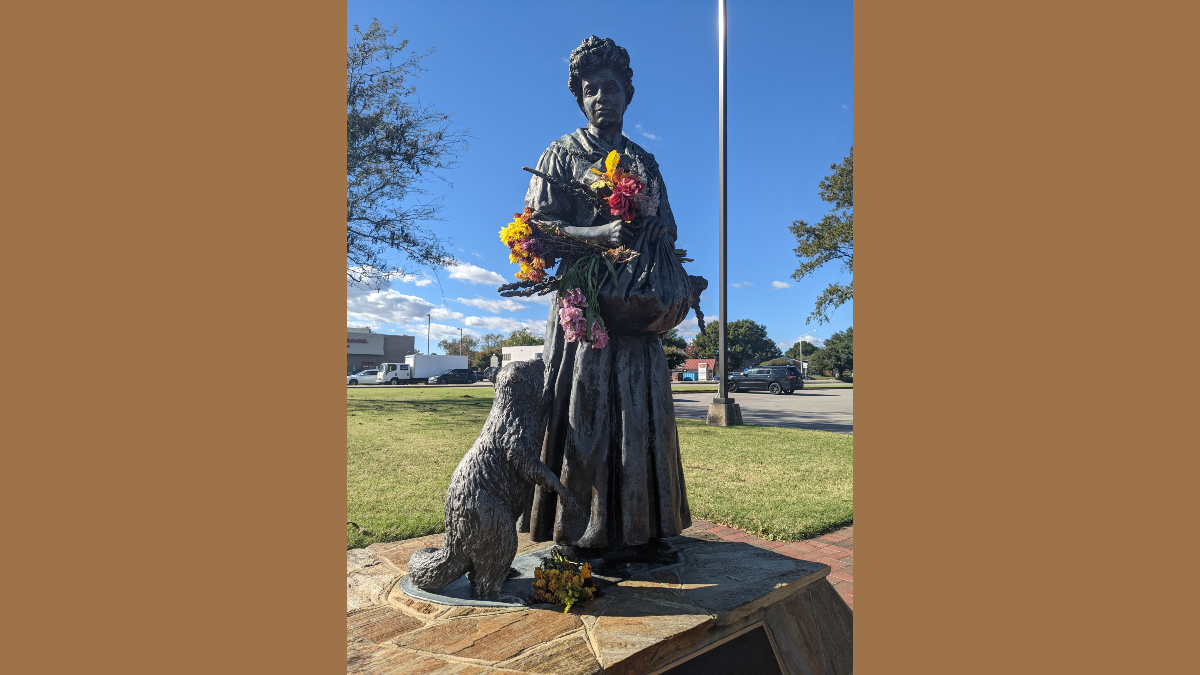 Photo by Jordan Christie/WHRV. The statue of Grace Sherwood was sculpted by Robert Cunningham. It was erected near the corner of Independence Road and Witchduck Road in 2007, largely by the efforts of the late Belinda Nash. The animal next to Grace is a raccoon.

Open Channel: The legacy of Grace Sherwood, the alleged "Witch of Pungo"

Most of us know Witchduck Road for construction, traffic, and eminent domain, but it actually has a much deeper history that dates back more than 300 years.
Grace White Sherwood was born in 1660. She was the daughter of a carpenter and later, the wife of a planter and mother to three sons. She lived on a farm in the Pungo area, tending to crops, livestock, and her family.

A series of odd events plagued Princess Anne County in the early 1700s. Crops were dying, cows produced less and less milk, and storms rolled in. While other farmers struggled, it’s said that Sherwood’s land stayed fruitful and her animals stayed healthy. Her neighbors began to talk. Grace was said to be very beautiful, strong-willed, and a non-conformist for the times -- the perfect storm to stir up rumors of witchcraft.

In January 1706, a neighbor brought formal charges against Sherwood for witchcraft, and that July, she consented to her own ducking, a trial by water to prove if someone was, or was not, a witch.

People came from across the Commonwealth to see Virginia’s last reported ducking. They gathered as she was taken down what is now Witchduck Road to an area of the Lynnhaven River that is now Witchduck Bay. A 13-pound Bible was strapped to her chest, her left thumb was tied to her right toe, her right thumb to her left toe, and then she was dropped into the river. If she drowned she would be declared innocent. If she survived, she would be named a witch and punished.

The details surrounding what happened next are vague and mixed with stories from the last 315 years. It was said that dark clouds gathered over the area as soon as Sherwood entered the water and they burst open above the spectators, washing them off the roads as they tried to flee. Another story tells that Sherwood swam around the bay for a while, singing witchy tunes as they tried to catch her. The more historically accepted version is that Sherwood knew how to swim and was able to undo her bindings and swim to shore.

Amid all of the rumors and tall tales, one thing is true beyond a doubt -- Grace Sherwood survived.

She was jailed near the Princess Anne County Courthouse for nearly eight years and made to pay a debt of 600-pounds of tobacco to a neighbor. In 1714, she was able to return to her three sons on their family farm and live out the rest of her days. She passed away in 1740 at the age of 80.

More than 300 years after her ducking, people continue to create art about her story, her resilience, and her legacy. Books, movies, paintings, and songs have been created throughout the years that detail the local legend that is the Witch of Pungo.

Larry Estes is a Hampton Roads based artist known for Beheaded Betty and the Art’s Up Gallery at Pembroke Mall. He spent his teenage years in Witchduck Point, a neighborhood next to Witchduck Bay. He says he only remembers Grace’s story as a “little side joke.”

He added, “We were there, taking it for granted that we were in a legendary neighborhood.”

His book, "Curse of Witchduck," came out in 2019. It follows the journey of two teenage boys living in the Witchduck Point neighborhood as they try to lift a curse and prove Grace Sherwood’s innocence. He was inspired to write the book after an original portrait he made of Sherwood went missing from a print shop in 2017 -- something that the shop said was very uncommon. Mysterious occurrences and strange coincidences befell Estes throughout the book writing process, which only pushed him more into Grace’s story.

Estes said the portrait's disappearance has “been something of an inspiration to delve deeper into her life.”

His newest exhibit at Art’s Up Gallery gives the viewer a new perspective on the 1706 trial. A stool sits alone, surrounded by 12 portraits of a submerged Grace Sherwood covered by a sheer sheet. There is a large portrait of her at the front.

“I've essentially reversed the scene. And what makes it eerie is that she is underwater in these portraits, which at that point, is a sign of innocence. So she's looking through the eyes of innocence at an empty stall. It’s eerie when you come to this exhibit and look, and it's just nothing but a bunch of portraits of Grace Sherwood looking at you -- but it's definitely moving.”

Estes said the exhibit won’t be the end of his artistic journey with our local witch.

Art McDonough is another local artist. He was a member of the band East Virginia and wrote the song “Legend of Grace Sherwood” in the late 1970s. He said he was inspired by a book report from one of his students on "The Witch of Pungo," a children's book by Louisa Venable Kyle.

“I immediately thought, ‘Hey, that's the type of thing that songs could be made out of.’ So I checked the book out, took it home, and really kind of wrote the words to the song based purely on what I knew from the book.”

His bandmates loved the idea and they added it to their 1977 album, East Virginia Sings of Witches and Whippoorwills.

McDonough said the song ignited an interest in the band for local stories and legends. They’ve gone on to make other songs about Eastern Virginia history, like “Wreck of the Carrie Norton.”

It took 300 years for the state of Virginia to finally pardon Grace Sherwood for witchcraft. The late former Mayor of Virginia Beach, Meyera Oberndorf, read the letter from former Governor Tim Kaine in 2006 at an annual reenactment of Sherwood’s trial at the Ferry Plantation House.