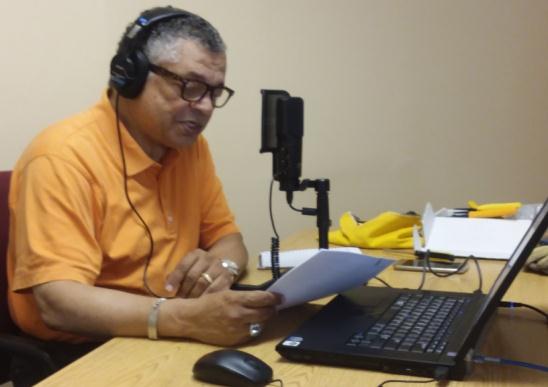 Last month, The WHRO Voice added the long running Williamsburg newspaper, The Virginia Gazette to its growing list of new audio programs offered to the blind, visually impaired and print handicapped citizens of southeastern Virginia. As part of that inaugural reading, The Voice also opened its new recording studio at the WHRO Williamsburg office and commemorated the event with a special presentation attended by dedicated members of the WHRO Williamsburg Advisory Council and representatives of The Virginia Gazette along with senior staff of WHRO Public Media. The mid-week edition of the Gazette is pre-recorded each Wednesday by Voice volunteers in Williamsburg and aired the same day at 1:00 pm. Other Williamsburg publications such as Trend & Tradition published by the Colonial Williamsburg Founation will be added to the Voice schedule later in the year. Special thanks to Julie Woodard, Dory Morrison and Deborah Farmer of WHRO for helping to coordinate and support the kickoff event. The new studio was designed and installed by WHRO engineer Ray Lenz with the support of Volunteer Team Leader and Voice reader, Nat Brown.