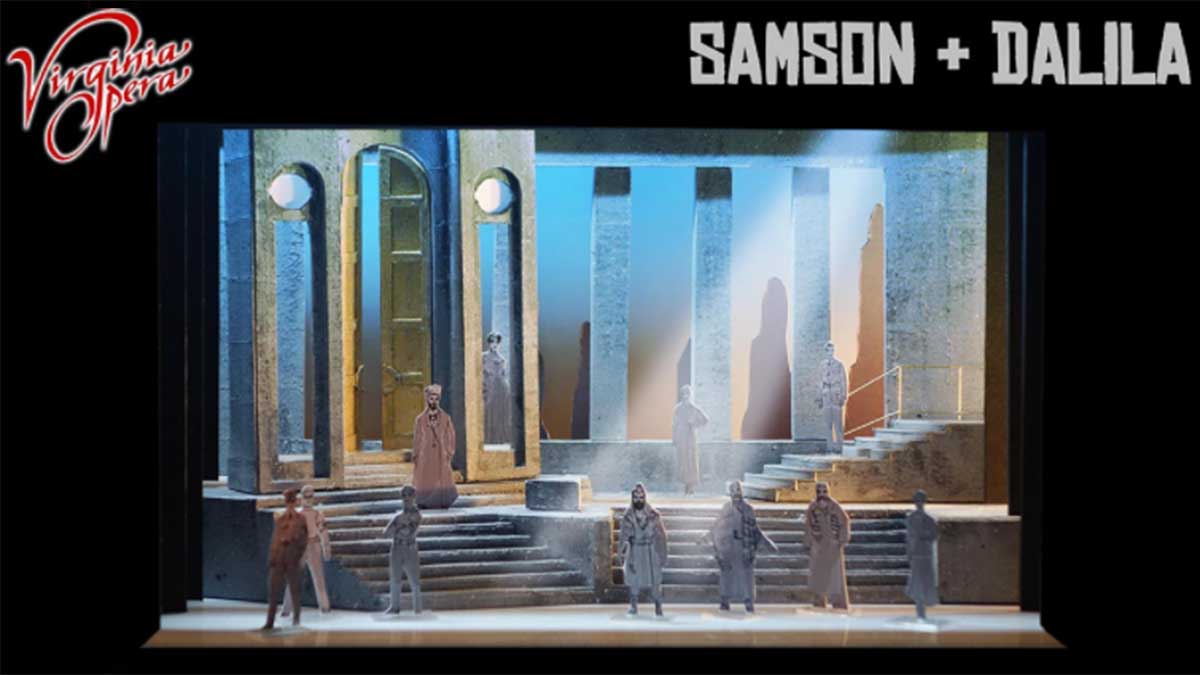 Virginia Opera launched its 43rd season last weekend with Camille Saint-Saëns’s Samson and Delilah. Since 2011, Virginia Opera has started every season with a work their audience has never seen before. Surprisingly enough, the company has never mounted a production of this monumental French opera.

The curtain rises on a grand staircase leading to the temple of the god Dagon. The strings of the Virginia Symphony Orchestra play emotively as the chorus of Hebrews laments their oppression by the Philistines. Their hero, Samson, promises the Hebrews that God will save them.

Samson and Delilah follows a man who strays from his convictions after falling in love with a beautiful and manipulative woman – once their lips meet, everything goes south. He’s eventually blinded and doomed to live the rest of his days in anguish.

Director Paul Curran swaps Samson and Delilah’s biblical setting for 1930s Germany. Set and Costume Designer Court Watson’s keen eye for detail enlists a symbol for the followers of Dagon. This symbol appears on furniture, costumes, and sets, increasing in frequency as the opera goes on and the towers of Dagon plummet to their finish. Other than giving Watson artistic license to create stylish attire for the large cast, the setting change proves irrelevant to the plot.

Although the choristers don’t sing solo, they’ve crafted distinct characters with Curran’s guidance. Aside from issues staying with the orchestra during the fugue, the chorus uncorked opening night with energy, clear diction, and precision under Chorus Master Shelby Rhoades and Conductor Adam Turner.

Tenor Derek Taylor’s powerful voice makes it easy to forgive his tendency to “park and bark,” aka stand still and sing without acting. Comfortable as stoic Samson, Taylor’s physicality becomes an issue when the music dictates more tumultuous passion.

The role of Delilah demands a diva with the utmost vocal quality and flair, and mezzo-soprano Katharine Goeldner rises to the challenge. Her even-toned, resonant timbre is blooming and agile; she plays the coquette well and the monster Delilah better. Goeldner and Taylor lack chemistry, but blend and soar beautifully in their Act II duet.

Other admirable performances include Michael Chioldi as a full-voiced and energetic High Priest of Dagon, Stefan Szkafarowsky’s solos as the Old Hebrew, and Marcy Richardson as an aerialist in Act III.

Premiered in 1877, it wasn’t until the 1890s that great opera houses began mounting productions of Samson and Delilah. Many find fault with its pacing; the beginning drags with excess exposition, and Samson’s eventual triumph feels anticlimactic. On opening night in Norfolk, the final curtain fell to confused murmurings. Was that it?

Virginia Opera continues its tradition of freshening classics – in Act III’s Bacchanale, shirtless choristers sport party hats and bondage gear, and strippers simulate sex in thongs. Bacchanale’s hedonistic crew surroundsSamson as he despairs on hands and knees. The contrast of cruelty and torture with raunchy frivolity is powerful, but abrupt – where was all this sex during Samson’s seduction?

Virginia Opera’s sexual displays are often criticized, but sex in operas can humanize the art form, keep audience members interested, and support the plot. Is Curran’s staging here insightful or merely crafted for shock value? I’m on the fence, but I do know this: sex can make millennials come to the opera, but it won’t make them stay. Singers who act, relevant storylines, interesting settings, and welcoming atmospheres are more likely to retain audiences of all ages than misplaced sex scenes.

Despite some misgivings, Virginia Opera’s latest production is worth seeing – perhaps more for its bold choices than artistic merit.

You have two more chances to see Samson and Delilah next weekend, October 13 and 15, at the Carpenter Theatre in Richmond. Next up this season is The Girl of the Golden West, coming to Norfolk, Richmond, and Fairfax stages in November and December. Visit vaopera.org for tickets and more information.