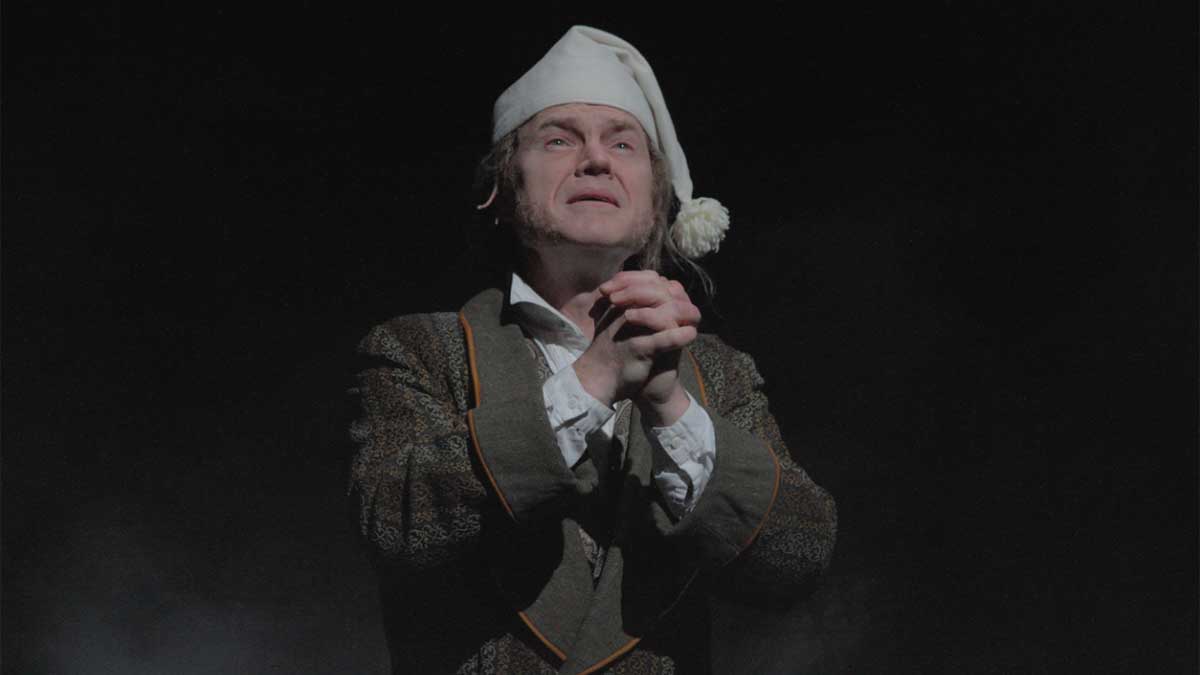 Virginia Stage Company opened their annual production of Charles Dickens’s A Christmas Carol last weekend at the Wells Theatre in downtown Norfolk. A Christmas Carol is often credited with sparking the concept of “holiday spirit.” This year launched a revamped musical adaption by director Patrick Mullins, with a refreshed script and set, along with a new lead starring as Ebenezer Scrooge.

In A Christmas Carol, Scrooge is haunted by ghosts who reveal glimpses of his past, present, and future. In 19th-century London, upper class homes stood beside slums; wealthy Victorians interacted with beggars on the street every day. Many rich Londoners believed that God decided who flourished and floundered, and that it was not their business to interfere. “If they would rather die, they had better do it” Scrooge says, “and decrease the surplus population.”

Themes of humanity, compassion, and joy permeate this surprisingly cheerful production. The diverse cast includes many new faces. Clark Scott Carmichael is superb as Scrooge. Most actors play up Scrooge’s eventual transformation into a better man for laughs; Carmichael's interpretation is more genuine, nuanced, and relatable. Scrooge isn’t a comic book villain, but a product of his time.

Several local children take the stage in A Christmas Carol. Aurora Sauer is splendid as the glittery Ghost of Christmas Past and Aidan Clarkson is winning as Tiny Tim. Aidan Roche makes a charming Young Scrooge in his dialogue with his little sister, Fan, played adorably by the precocious Lily Rouse.

The adult cast is excellent as well. Highlights include John Forkner as Bob Cratchit and Meredith Noël as Mrs. Cratchit. Anthony Mark Stockard is haunting in his cameo as Jacob Marley; Costume Designer Jeni Schaefer has him in stylish silver for his spooky entrance through a trapdoor. Christopher Lindsay is appropriately exuberant in his role of Scrooge’s nephew, Fred, and Anna Heffington plays a lovely Belle.

Roy George arranged the music, which consists of medleys of holiday songs, like Joy to the World and Carol of the Bells, sung in a pop style. George’s arrangements are fun, but the singers are inconsistent. Many show promise, but lack volume and struggle staying with the pit band. In addition, the pop vocals often sound out of place against the Victorian backdrop and disrupt the dramatic tension.

Sound Designer Ryan Hickey helps demonstrate the progression of time and transition between spirits. Chirping birds awaken Scrooge after his epiphany and an eerie white noise plays during the Ghost of Christmas Future’s reign. Matthew Allar’s set is simple, but suits the space and script well. Staircases with a landing area for action lead up to facades of homes and offices against a wintery sky that changes with the mood of every scene.

A fire pit opens beside Scrooge’s awaiting tombstone in the final minutes of the play. Scrooge repents, returns to the present, and proclaims: “I will live in the past, the present, and the future. The spirits of all three shall strive within me.” Snow falls as the ensemble closes the show with a joyful and well-rehearsed selection of Christmas carols. Virginia Stage Company leaves us with hope renewed in trying times. We are lost, but we are not helpless. With holiday cheer and the goodwill of men, we can come together to craft a more empathetic world.

A Christmas Carolruns at the Wells Theatre though December 24th. Next up for Virginia Stage Company is Pride and Prejudice, January 17 through February 4. Visit vastage.org for tickets and more information.


Listen to past features from Opening Night With Rebecca Evans. Read more about Rebecca.