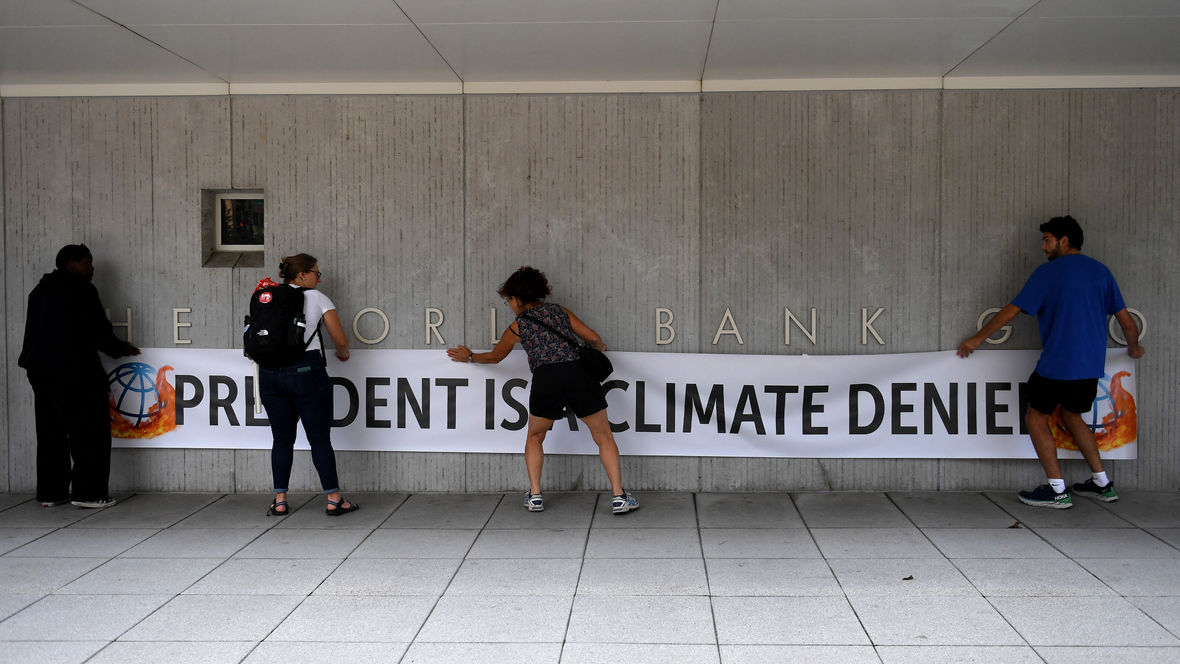 Activists unfurled a banner calling David Malpass a climate denier on the World Bank headquarters after he refused to say if he believed man-made emissions contributed to global warming.

Climate activists want Biden to fire the head of the World Bank. Here's why

Climate activists are calling on President Biden to take steps to fire David Malpass, the head of the World Bank, after he publicly waffled on whether he believes that greenhouse gas emissions from human activity are causing climate change, saying "I'm not a scientist."

Malpass made the comments after former vice president and noted climate activist Al Gore called him a "climate denier" at a New York Times event on the sidelines of the U.N. General Assembly earlier this week.

Malpass subsequently tried to clean up his comments, telling Politico on Friday that it was a "poorly chosen line." Malpass defended the bank's investments and said he would not resign.

That did little to silence the calls for his removal.

"If he's not going to be the one who really pushes and pressures the World Bank in a new direction which really works on climate initiatives, then he has to go," Yakupitiyage said.

The White House is making its displeasure public

On Friday, White House press secretary Karine Jean-Pierre directly criticized Malpass and the bank — and would not say whether President Biden retains confidence in Malpass' leadership.

"We disagree with the comments made by President Malpass," Jean-Pierre told reporters. "We expect the World Bank to be a global leader of climate ambition and mobilization of significantly more climate finance for developing countries," she said, noting the Treasury Department "has and will continue to make that clear."

The United States plays a key role in nominating the president. But other nations that are shareholders in the bank would have a say on any change in leadership, Jean-Pierre said.

"Removing him requires a majority of shareholders — so that's something to keep in mind," she told reporters.

It's not the first time Malpass has come under fire

Malpass was nominated for a five-year term at the bank in 2019 by former President Donald Trump. The World Bank's board typically approves the nomination of the United States, which is the bank's largest shareholder.

He has long been criticized by climate and environment advocates because of the bank's continued financing of fossil fuel projects around the world. They argue that more should be done to move to cleaner energy sources.

Malpass' latest comments were a "remarkable gaffe," said Scott Morris, co-director of sustainable development finance at the Center for Global Development — but he said there's a deeper fault-line between the bank and climate activists.

"The climate advocates are increasingly frustrated that this institution that really is a central player is not demonstrating the kind of ambition on climate that they think is needed," Morris said, explaining Malpass had not pushed to lead the bank in that direction.

"You compare him to where the climate community thinks the bank needs to go and it simply isn't ambitious enough," Morris said. "He clearly is not trying to push the bank further in the right direction and has demonstrated no particular ambition around climate beyond the baseline of support the bank is providing right now."

Lisa Frank, executive director of the Washington Legislative Office of Environment America, said it was good that Malpass eventually acknowledged that his remarks fell short. But she said actions speak louder than words. "Investing in fossil fuel projects is incompatible with what we need to do to tackle global warming," Frank said.

Earlier this month, the World Bank touted spending $31.7 billion in fiscal year 2022 to help countries address climate change and has called itself the "world's largest financier of climate action in developing countries." Projects range from expanding the solar industry in India, to biodigester programs across Sub-Saharan Africa, to increasing affordable electricity access in Nigeria.

Malpass defended the bank's record on climate, saying it had made a "forceful leadership job" and was using climate science to find investments that would have the greatest impact. He said he was caught off-guard by the question about his climate change beliefs.

"When asked 'Are you a climate denier?' I should have said 'No,'" Malpass said. "No one's said that other that Al Gore, and it was pretty much off-topic," he said at the Politico event.

"It's clear that greenhouse gas emissions from human activity are adding to, are causing climate change, so the task for us — for the world — is to pull together the projects and the funding that actually has an impact," he said.