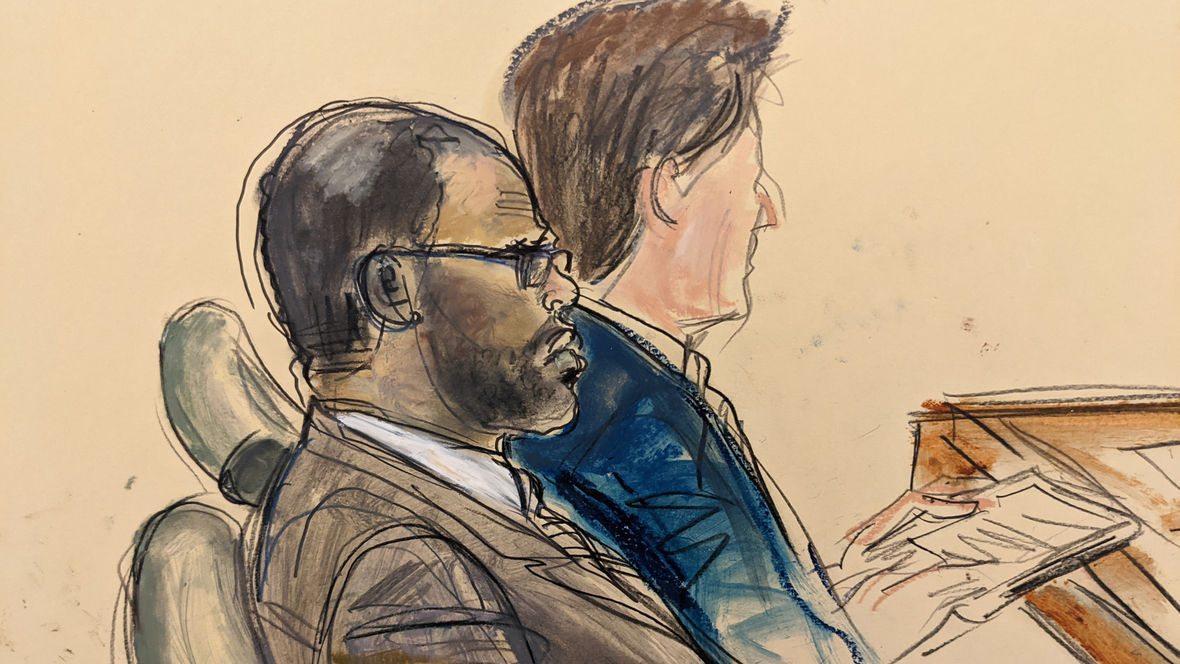 In this courtroom artist's sketch made from a video screen monitor, R. Kelly (left) and lawyer Thomas Farinella listen during the opening day of his trial on Aug. 18, 2021 in Brooklyn, New York.

Notebook: A Month Into R. Kelly's Trial, Here's What It's Been Like In The Courtroom

The federal trial against R. Kelly in New York is now almost at the end of its fourth week of testimony. Dozens of witnesses for the prosecution, including 11 alleged victims, have appeared on the stand in this case, in which the R&B superstar stands accused of running a criminal enterprise not unlike the mob. In this case, the government says, the purposed of that enterprise was to "prey upon young women and teenagers" and lure them into sexual relationships.

When jurors were selected early last month, Judge Ann Donnelly told them that the trial would take about a full month after testimony began on Aug. 18. We're almost at that point already now, and the prosecution is still laying out its argument. We don't know how many more witnesses the government expects to call, who the defense team is going to put forward, or whether Kelly himself is going to take the stand.

It seems exceedingly unlikely, however, that the trial will wrap up in the next few days. And that's without considering Kelly's second scheduled federal trial, to take place in Chicago at some future time. There, Kelly will face separate charges of child pornography and obstruction of justice. Kelly has pleaded not guilty to all charges across both federal indictments.

I've attended the trial in Brooklyn on many days. It's been a strange experience so far, even by the standards of high-profile celebrity cases. Because of COVID protocols, journalists and the public have been assigned to overflow courtrooms, to watch the proceedings via video and audio feeds. Every trial day, hours before the court even opens, R. Kelly supporters line up to snag hotly coveted seats in the overflow areas; multiple disputes over seats and places in line have precipitated the intervention of U.S. marshals and local police. After court ended on Sept. 3, the NYPD arrested one male Kelly supporter who, according to police, was accused of sexually harassing another supporter.

"Is that a weird shadow?"

In the meantime, we journalists covering the trial spend our days peering at tiny figures rendered so small onscreen that even the sketch artists seated in the front row of our overflow courtroom have had considerable difficulty discerning participants' basic features. ("Is she wearing glasses?" "Does he have a shaved head, or is that just a weird shadow?") We can't see the jurors at all, because — again, due to coronavirus protocols — they are seated not in the traditional jury box, but instead spaced out in the gallery, where public observers usually sit.

As a result, we in the media have no idea how jurors are reacting to the testimony they're hearing. Is anyone snoozing through long stretches while experts are describing the particulars of cell phone data? When alleged victims burst into tears on the stand, as several have, is anyone in the jury viscerally responding? Are jurors taking notes, or just letting information wash over them? When the defense team brings up the names of Kelly's former peers and colleagues — for example, the late singer Whitney Houston, whose name has been raised repeatedly — do they seem star-struck?

None of those kinds of reactions will determine their eventual judgment of innocence or guilt, of course. But body language could provide insights into how they're feeling at any given time.

Not following the "rules"

Day in and day out, testimony from witnesses — both those named in the indictment and some who are alleged victims of "uncharged crimes" purportedly committed by Kelly — has rung similarly throughout, and much of it has been very difficult to listen to. Six alleged victims described being abused by Kelly while they were minors. Women have detailed being forced into unwanted sexual encounters, sometimes with other people, including strangers. Women have recounted alleged episodes of intense physical and sexual abuse for breaking one of his many "rules." Women have stated that Kelly had lied to them by claiming he had no STDs, and finding out after the fact that he had given them herpes.

Both women and men, who were minors or still teenagers when they met Kelly, have said that either Kelly or one of his associates slipped them his phone number after seeing him somewhere — at a show, at a mall, at a McDonald's — and wound up as one of his sexual partners. One woman said on the stand that Kelly made her have sex with another man as punishment for breaking his rules, and also forced her to have an abortion. Another described being raped backstage at one of the singer's shows, soon after meeting Kelly.

Still another, "Angela," a former back-up dancer for Kelly and a back-up singer for Kelly's late protégée, Aaliyah, said in testimony Monday that she witnessed Kelly appearing to perform oral sex on Aaliyah when the singer was just 13 or 14 years old. "Angela" appeared in the docuseries Surviving R. Kelly, but did not make accusations of her own there. On the stand, however, she said that she, too, was sexually abused by Kelly.

Also on Monday, a man who went by "Alex" in court, but who also was referred to in other testimony by the nickname "Nephew," recounted being directed by Kelly to have sex with "countless" young women, as well as with Kelly himself, while Kelly recorded them all on video. Alex said he was not allowed to talk to the women or to learn their names. He flatly described the women's demeanor during their sexual encounters as "zombieish." Alex also said that he himself was "brainwashed" by Kelly. When asked by a prosecutor, "Why did you do what the defendant told you to do?" Alex hung his head and said, "I actually don't even know."

Two experts recently told Insider that Kelly's alleged behavior fits that of a cult leader. According to Rick Ross, executive director of the Cult Education Institute, "The women that are under his control, or have been under his control, they're not functioning independently. He's engendered dependency upon himself to make value judgments, to critically think, to analyze things — it's incapacitated these women from being able to think for themselves."

In contrast, the defense team has alternately sought to characterize the women as "groupies," or argued that Kelly treated them lavishly, providing them with gifts, trips and spending sprees, while always opening doors for them and standing if they entered a room.

Defense lawyer Devereaux Cannick has repeatedly asked women on the stand if they twerked at Kelly's shows or in his presence, as if dancing suggestively meant that they deserved alleged abuse. Cannick also tried to discredit the allegations of one woman, "Sonja," who believes that she was drugged and sexually assaulted at Kelly's home after going there to interview him for a Utah radio station. In her testimony, she said that she'd eaten a few bites of Chinese food shortly before she fell asleep. "Was it MSG?" Cannick asked her during cross-examination, implying that she'd gotten sick because she'd ingested monosodium glutamate, a common amino acid present in everything from tomatoes to Cool Ranch Doritos. (Activists say that anti-MSG sentiments are more about racism than about science.)

Kelly has a team of four lawyers, two of whom have never argued a federal trial before — and it often shows. Just during the defense's opening statement, for example, Judge Donnelly interrupted defense lawyer Nicole Blank Becker to ask for a sidebar, or sustained objections against her, more than half a dozen times. My media colleagues who are full-time court reporters, who also are covering the Kelly trial, tell me this is very unusual, especially in such a high-profile case.

On the other hand, the defense has pointed out inconsistencies between what one witness said on the stand during the trial and statements she had made earlier. Another woman brought forward by the prosecution as a former girlfriend of Kelly's clearly did not want to testify; what she said on the stand didn't fit certain patterns laid out by other female witnesses, which served the defense's argument well.

"It's a bit misleading to call him a co-lyricist"

Meanwhile, outside of court, R. Kelly received a songwriting credit on Drake's new album, Certified Lover Boy, which dropped earlier this month. The project has earned Drake a historic place on the Billboard charts, with nine out of the top 10 songs on the Hot 100. Drake's "TSU" — currently charting at No. 9 — incorporates material from a song released by R. Kelly in 1998 called "Half on a Baby." The Drake song includes a sample from a track on which Houston DJ OG Ron C raps over an orchestral passage from the Kelly song.

In a recent Instagram comment, longtime Drake producer and collaborator Noah "40" Shebib wrote: "It [the R. Kelly sample] has no significance no lyrics are present, r Kelly's voice isn't even present but if we wanted to use Ron c talking we were forced to license it. Doesn't sit well with me let me just say that. And I'm not here to defend drakes lyrics, but I thought I would clear up that there is no actual r Kelly present and it's a bit misleading to call him a co lyricist." Still, having worked in the business as long as Drake and Shebib have, they surely must know how credits are parceled out for samples—and it's hard to imagine Drake and his collaborators wouldn't have foreseen any blowback.

It's equally hard to fathom that they didn't realize the optics of utilizing an R. Kelly-related sample in this particular moment in time—and that they didn't recognize that scandal sells. After Surviving R. Kelly first aired, streams of R. Kelly's music surged, even though he had been removed from Spotify's playlists the preceding year. Just as Aaliyah's name and the story of her marriage to Kelly at age 15 was coming up in court testimony, her uncle Barry Hankerson — who had managed both her and Kelly, and who owns the rights to much of her material — began to release many of her recordings to streaming services for the first time, to the dismay of Aaliyah's estate, including her mother.

"It was dues time"

On Monday, a weeping Angela gave testimony about her own alleged abuse and that of Aaliyah. During one tour stop in 1992 or 1993 in Washington, D.C., Angela said, she and a group of other teenaged girls, including Aaliyah, were instructed by Kelly to stay at the hotel while he and his male associates hit the town. Hungry, the girls went to a nearby 7-Eleven for food. While outside, they ran into Kelly, who was enraged. The punishment for their supposed infraction, Angela said, was to "put out" and have sex with him.

"It was dues time," she explained. Angela said that on this occasion she refused him, and suggested to Kelly that she would call her mother and let her family know what was going on. Kelly allegedly relented, saying he was "just joking."

Aaliyah billboards have sprouted up around Manhattan in the past few weeks, hailing the arrival of her albums on streaming services. Often, just minutes after I leave court, I pass underneath a giant version of her towering over Canal Street, full of such promise, fire and swagger. Some days, it's been hard even to glance up at her, given the testimony that we've heard.