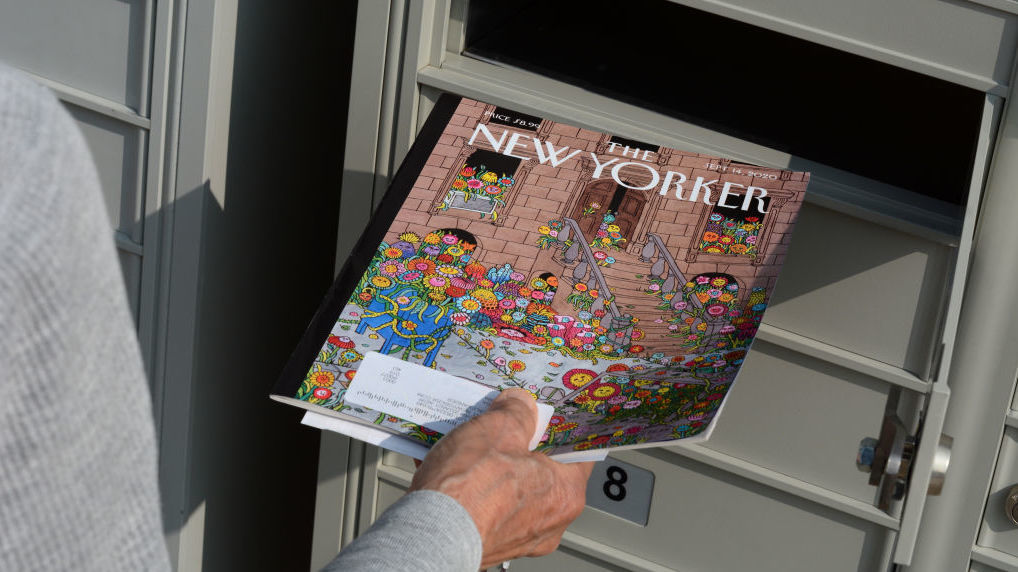 A woman retrieves a copy of The New Yorker magazine from her mailbox in Santa Fe, N.M., in 2020.

On Tuesday, journalism and literature Twitter blew up after a user posted a 20-part thread decrying the lack of diversity among writers and editors at one of the most vaunted publications in the country, The New Yorker.

The stats offered about the print magazine were stunning: In the last 15 years, less than 0.01% of print features and critical pieces were edited by a Black editor. More women were able to publish profiles in the magazine between 1925 and 1935 than between 1990 and 2000. And over the last 30 years, spanning 1990 to 2020, few to no reviews of cinema, fine arts or classical music were published by either women or writers of color.

Many readers of this thread were surprised to discover that it was written by a New Yorker insider: Erin Overbey, the magazine's own archive editor. She began her thread: "Let's talk about racism! Most white people at prestigious magazines don't ever want to talk about race or diversity at all. Why? It's primarily because they've been allowed to exist in a world where their mastheads resemble member registries at Southern country clubs circa 1950."

She went on: "White people are rarely actively racist at these publications. They simply never bother to challenge the status quo—typically out of concern that they will be inconvenienced or made to feel uncomfortable. And so the status quo often remains entrenched for literally decades. ... Because otherwise friendly, decent white people are really the bedrock upon which passive racism maintains its grip on media mastheads & editorial departments."

In a phone conversation Wednesday afternoon, Overbey said that she has been working on this project off and on since 2019 after realizing that data analysis would offer an objective look at the magazine's track record.

"For a long time, I had been having just regular conversations and discussions with colleagues and other people in the media about the lack of diversity in senior editorial ranks," Overbey said. "The representation of bylines is something that is public and transparent and offers a very clear picture of the voices represented at a particular institution. So I felt that that was a very helpful indicator."

Within her thread, Overbey pointed out that the magazine's website "has, over the past 5 years, published a comparably impressive array of diverse bylines, easily eclipsing the print mag in terms of representation and inclusivity."

Michael Luo, the editor of The New Yorker's web offerings, took to Twitter himself to respond to Overbey's findings. In his own multipart thread, Luo wrote: "We've more than doubled the size of the digital operation at the magazine since I came aboard in 2016, and the percentage of POC hires has been very, very high. It's worth looking at who we've brought aboard as editors, staff writers, and contributing writers over the last several years. It's an incredibly talented, diverse list. It's a top priority across the enterprise, and you see it reflected in department after department. (One obvious example: our fact-checking department, which has grown tremendously.)"

Fact-checkers are not credited on the magazine's masthead. In June, fact-checkers were among the union members who walked off the job for a day over salaries and other compensation issues at The New Yorker. The union reached an agreement that will raise base pay at The New Yorker and other Condé Nast-owned media outlets to $60,000 by April 2023.

In a comment emailed Tuesday to New York magazine, a spokesperson for The New Yorker wrote: "We've worked hard for years to increase the number of underrepresented voices at The New Yorker, and we've made significant progress — among our writers, in senior editorial positions, and across the entire enterprise. Nearly 40 percent of new hires at Condé Nast are from diverse and underrepresented backgrounds. While we don't believe these tweets present a full or fair view of The New Yorker and its ongoing efforts, there is always more work to do, and we look forward to doing it."

A public radio program and podcast called The New Yorker Radio Hour, hosted by New Yorker editor David Remnick, is heard on many NPR member stations across the United States. It is produced by The New Yorker and WNYC Studios, a subsidiary of New York Public Radio.