2 Artists Want G-7 Leaders To End E-Waste. So They Sculpted Them Out Of Trash 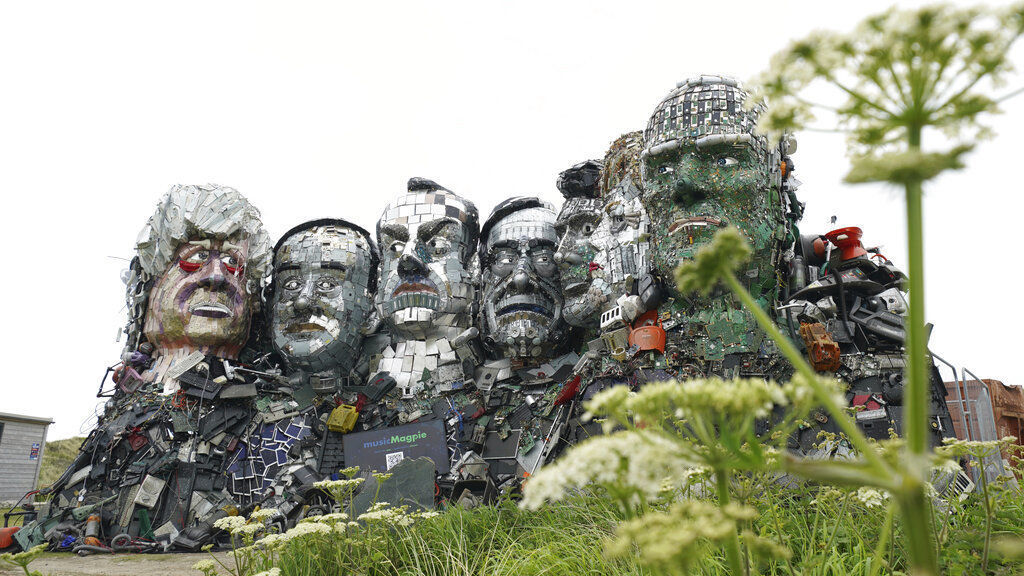 A sculpture created out of electronic waste in the likeness of Mount Rushmore and the G-7 leaders sits on a hill in Cornwall, England, near where the leaders of the world's wealthiest nations will meet.

CARBIS BAY, England — Security is tight in the English county of Cornwall as President Biden and other leaders of the Group of Seven – seven of the world's wealthiest countries — prepare to meet for a weekend summit beginning Friday.

But if you want to catch a firsthand glimpse of Biden, Germany's Angela Merkel or the other powerful politicians, your best bet may be a two-story sculpture that replicates their likenesses using electronic waste in the hills overlooking the resort where they are meeting.

The sculpture, which is drawing large crowds, is arranged like Mount Rushmore — but with the G-7 leaders instead of U.S. presidents.

The sculptors, artists Joe Rush and Alex Wreckage, have dubbed it "Mount Recyclemore." Rush says he hopes the leaders spotted it on their flights to Cornwall and that it encourages them to address the world's avalanche of e-waste.

The world produces about 53 million tons of e-waste annually and that volume is expected to double by 2050, according to the United Nations Institute for Training and Research and the International Telecommunication Union.

Adam Minter, author of Junkyard Planet: Travels in the Billion-Dollar Trash Trade says that most people in the developed world associate e-waste with unsafe practices in developing countries.

But he says Mount Recyclemore "forces viewers to consider e-waste as something that's local, immediate and very much theirs. Addressing questions of electronic refuse will in part require consumers in developed countries to tell manufacturers to make more durable and repairable devices. Artworks like this one are a starting point for the discussion."

The sculpture, which took 12 people to build over six weeks, bears a remarkable likeness to the world leaders it depicts. British Prime Minister Boris Johnson's famously unkempt hair includes a jumble of old telephone receivers hanging by their cords. Biden's skin is a carpet of green circuit boards and his lips are made of rows of the battered backs of Samsung and Apple smartphones.

Joanie Willett, who teaches politics at the University of Exeter in Cornwall, says she thinks the most thought-provoking touch is the circuit boards that make up Biden's face.

"Because these are things that we don't even see," she says. "It's totally invisible and we don't give any thought when we're using the stuff."

The sculpture provoked lots of comments about the environment among the scores of people who gathered there as dusk arrived Friday evening. There were also meta moments as people — with no apparent sense of irony — used their smartphones to shoot pictures of sculptures made with old smartphones.

The installation is not only a striking piece of art and environmental activism, but it's also a smart piece of marketing. It was sponsored by musicMagpie, a British company that buys old electronics and refurbishes them for resale, and its U.S. brand, Decluttr.

Liam Howley, the company's chief marketing officer, says the company buys about 1,500 tech items and 40,000 media items — including old CDs and DVDs — each day in the United Kingdom — and its materials were used to create Mount Recyclemore.

"We're trying to raise awareness, make sure people know about it, can act on it and encourage better behavior to refurbish, recycle, reuse," Howley says.