The Perseid meteor shower, pictured here near Death Valley, Calif., in 2019, is one of the most popular of the year. This summer, it peaks in the predawn hours of Aug. 12.

Perseid Meteor Shower Peaks After Midnight. NASA Says It's 'One Of The Best'

If you're tired of binge-watching TV during the pandemic, Mother Nature has an alternative. All you have to do is go outside between about 2 a.m. Wednesday and dawn local time, lie on your back and look up at the sky. The meteors and fireballs of the Perseid meteor shower should be streaking.

NASA says it's "one of the best" meteor shows of the year. That's because of the sheer number of meteors — 50 to 100 meteors to catch per hour as well as their fireballs — larger, brighter explosions of light and color that last longer than an average meteor streak.

The popularity of the Perseids also has to do with the season. Summer temperatures make for pleasant viewing conditions: The American Meteor Society says there are stronger meteor showers, but those appear in the Northern Hemisphere during the colder parts of the year.)

The brightness of the moon, which rises around midnight, will reduce the number of visible meteors to 15 to 20 an hour, although that's still a meteor every 3 minutes or so.

The Perseids are best seen in the Northern Hemisphere. You don't need a telescope and you don't need to pick a corner of the sky — they're everywhere.

But you do need the weather to cooperate. A cloudy night sky means you won't see much of anything.

Perseid meteors are the result of space debris left behind by the Comet Swift-Tuttle, which orbits the sun every 133 years. Earth passes through these trails of comet dust every July and August, causing debris to collide with the atmosphere and disintegrate into fiery streaks.

This particular shower gets its name because the meteors appear to be coming from a point in the sky right by the constellation Perseus.

Even though NASA says no special equipment is necessary, its meteor mavens do have some suggestions to improve your viewing experience. They recommend spending half an hour outside to let your eyes adjust to the dark — and avoiding bright lights like a phone screen.

The American Meteor Society advises watching from an area as dark as possible and fixing your gaze about halfway up the sky, as more activity is visible at lower elevations. It also suggests a viewing window of at least an hour as these celestial displays are "notoriously variable."

"One can watch for 10 minutes and see no activity at all!" it said. "Just a few minutes later, several meteors may appear nearly simultaneously."

Even though early Wednesday is prime time for the Perseid meteors, both NASA and the AMS say viewers may be also able to see some showers outside of that window — potentially earlier in the night on Wednesday as well as in the days leading up to and out of the peak.

"Midnight to dawn any morning the week before or after should produce a few meteors," NASA said.

And if you can't see this show live outside, there are video alternatives.

As Space.com reported, NASA's All-Sky Fireball Network has already captured footage of Perseid meteors, streaking through the sky over the weekend.

And there's a live broadcast of the meteor shower's peak, weather permitting, from a camera at NASA's Marshall Space Flight Center in Huntsville, Ala., from about 8 p.m. CDT on Tuesday until sunrise on Wednesday. 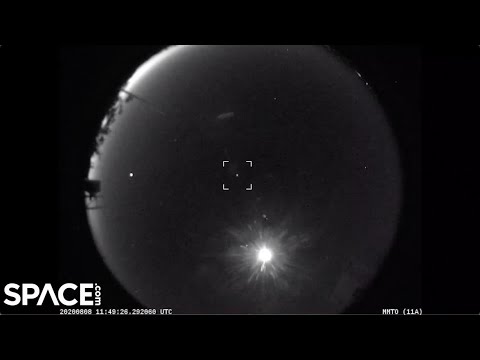