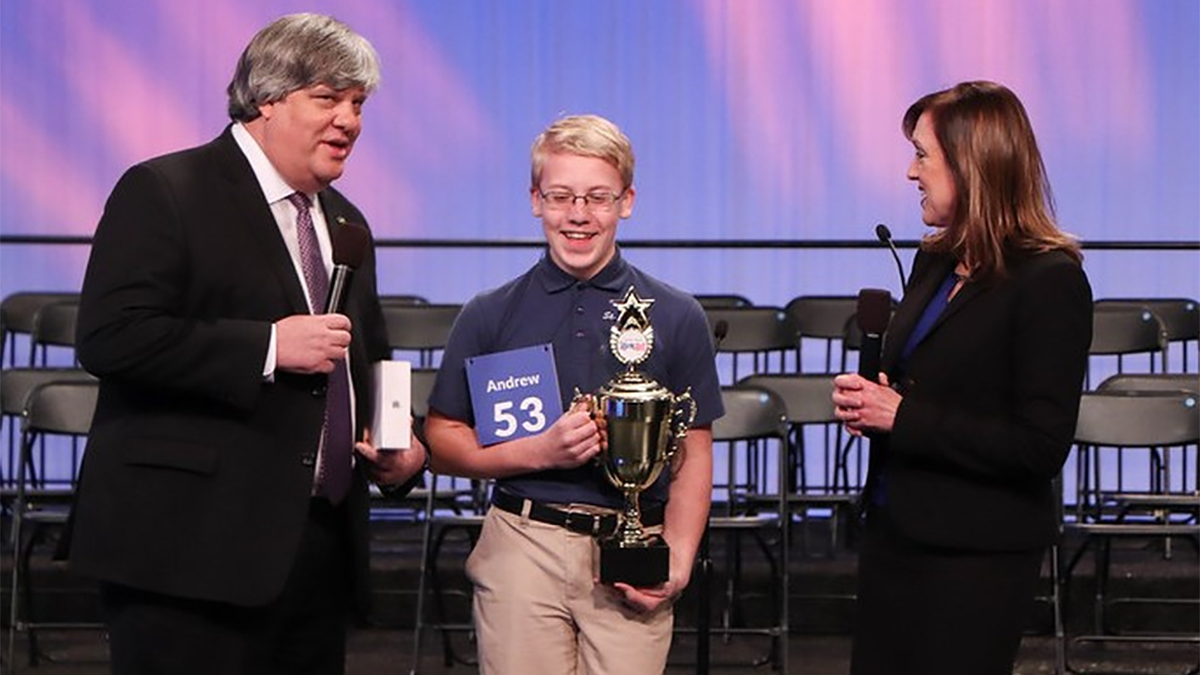 'Bardology' to 'Varicella.' Students Compete To Be Champion Speller

Are there alternate pronunciations? Would you use it in a sentence? What's the definition?

Those are a few of the tools open to spellers who are in the hot seat at the Viriginia Media Spelling Bee each year. From the answers, they try to parse together how a word might be spelled. And row after row, a few competitors spell out. Until only one is left standing.

Raymond Jones served as jaunty host for the 13th Annual Virginia Media Spelling Bee. He’s been playing this part since the bee began production at WHRO Studios 13 years ago. He noted spellers who had competed before and gave tidbits about language at each break—including sharing the longest word in English language (Pneumonoultramicroscopicsilicovolcanoconiosis—it was not part of the contest).

The official pronouncer and judge Bobbie Fisher, writer and editor, has also been with the bee all 13 years. She had a more serious role to play. She dished out the good (correct) or bad (incorrect) news at each word.

In the second round, words got more complicated—forensics, iteration, ecotourism, obelisk.

As the words got harder, contestants more frequently asked for definitions, word origins, and for words to be used in sentences. In round three, the pressure was on: panacea, litigious, bardolatry, malevolent, varicella.

Three quarters of the spellers were out by the start of the third round, and just five students left for round four.

The last two contestants standing were Lauren King of Peasley Middle School in Gloucester and Andrew Hoehn of St. Matthew's Catholic School in Virginia Beach. They struggled through several rounds, each failing to correctly spell a championship word correctly. Hoehn finally hit the mark with tapetum.

Hoehn said he’s really good at math and he loves baseball, but this has been his first foray into spelling contests. He didn’t realize he had a knack for it until he won his classroom bee this school year, then his school bee. After winning this one, he gets to compete in the National Scripps Spelling Bee in Washington, D.C. Last year, that contest hosted more than 500 students.

While spellers are given word lists to study for the school and regional competitions, the bar is raised for the national. Hoehn said the words “can be any word from the dictionary.” He also has to memorize definitions for one segment of the rounds.

Hoehn says winning the National Scripps contest is definitely worth the effort. First place gets a trophy, free access to the Merriam-Webster unabridged online dictionary, and money—first place receives $50,000.

Whether he wins the national bee or not, Hoehn says he plans to continue participating in spelling competitions. Though this is relatively new for him, he says really he likes it.

“I don't really know how to explain it,” he says. “It's just really fun and exciting because you don't know what's going to happen, what the next word is going to be.”

WHRO Public Media and Virginia Media will pay for Hoehn’s trip to Washington, D.C. for the contest.