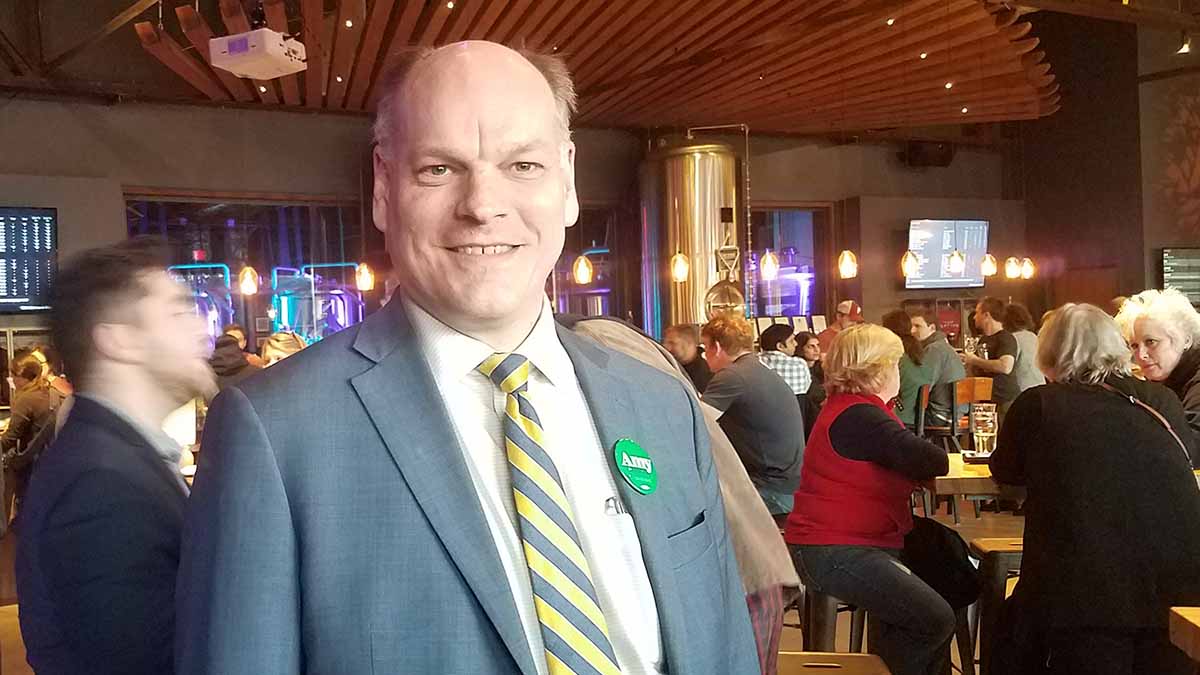 Gina Gambony/WHRO. Sen. Amy Klobuchar's husband, John Bessler, stood in for his wife at a Norfolk rally Saturday. Even Klobuchar supporters said they weren't sure she was the best candidate.

Those looking to meet Sen. Amy Klobuchar at her rally in Norfolk would be disappointed. The candidate for the Democratic nomination canceled her in-person appearance and sent her husband instead.

Aside from Klobuchar’s campaign staff, some folks stumbled upon the rally at Elation Brewing while stopping in for sunny Saturday afternoon beer. Even those who came specifically for the event were not sure that Klobuchar had their vote.

Jackie Alcorn of Virginia Beach said Klobuchar is her favorite candidate, but she does have a few caveats.

“I'm not sure whether Amy is the best candidate," she said. "I like her, I like what I've seen. I've watched debates on TV. Everything I know about her, I like. My only concern about her is, can she beat Trump or not?”

Joyce Williams of Norfolk said she really likes the senator from Minnesota, but her vote will go to the candidate who has the best chance of winning. Williams hadn’t figured that out yet, even with primary just days away.

Williams’ favorite candidate is Sen. Elizabeth Warren, but Warren may not get her vote.

Paul Pichardo of Virginia Beach didn’t realize a rally was happening at the brewery, but he’s planning to vote democratic in the presidential election.

Pichardo says he was a lifelong Republican, but switched gears when President Donald Trump was elected. He said his favorite candidate is former Mayor Pete Buttigieg, but he doesn’t plan on voting for him.

“I'm not happy with Bloomberg, but I feel he's probably got the best chance to actually take [Trump] on,” Pichardo said.

Regarding Klobuchar? “I don't believe she would have a chance, unfortunately.”

That fissure between voters’ favorite candidates and the candidates they plan to vote for was a common theme on Saturday. But not
everyone was suffering under the pressure to make the winning choice.

Barbara Kapinus and her husband Edward are fans of Klobuchar and have been following her campaign since the beginning.

“I think she represents more of a sensible, reliable middle America,” Barbara said. Edward said Klobuchar impressed him because of her clarity and directness.

The Kapinuses don’t think Klobuchar will win the primary, but they’re both going to vote for her. They want to use their votes to
send a message about the kind of candidate they like. Amidst all the differences, there was one thing that united every voter in the room, simply put by Joyce Williams:

Virginia is one of the 14 states that holds its primary on Super Tuesday.