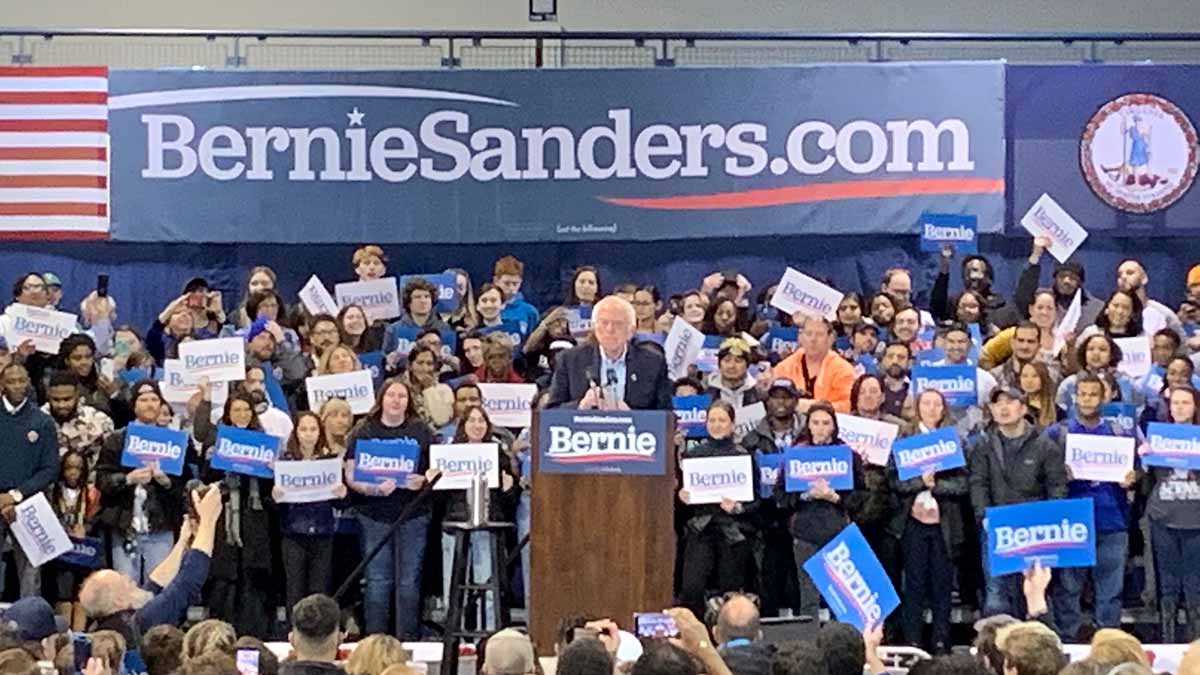 Bernie Sanders Rallies In Virginia Beach Ahead Of Primary

The stop at Virginia Wesleyan University followed other campaign events in Northern Virginia earlier that day and in Richmond Thursday. Sanders’ investment in the commonwealth has reflected his continuing focus on Virginia and 13 other states with primaries on Super Tuesday.

More than 3,500 people attended the Virginia Beach rally, according to the campaign. During his 35-minute speech, Sanders called for Virginia voters to turn out in droves for the primary.

“Bring your friends and family and colleagues to vote,” the 78-year-old Sanders told roaring attendees who waved “Bernie” signs. “If we can win here in Virginia — and with your help, I think we can — we stand a great chance to win the Democratic nomination.”

The rally occurred as the Democratic race tightened with former Vice President Joe Biden’s victory in South Carolina’s primary Saturday night. Before Sanders took the stage, the South Carolina results were broadcast at the rally to boos from attendees.

Sanders congratulated Biden during his speech and acknowledged the unpredictability of a long campaign.

“That will not be the only defeat,” Sanders said of his own campaign. “There are a lot of states in this country. Nobody wins them all.”

While Sanders is still ahead in national polls, Biden has been gaining momentum in the commonwealth. Sen. Tim Caine endorsed him on Friday, and a recent poll by Christopher Newport University has shown Biden leading among Virginia voters with 22 percent. Sanders trails in second at 17 percent, followed by former New York City Mayor Michael Bloomberg at 13 percent.

The poll showed signs of diminishing support for Sanders and Bloomberg who were tied atop the field in a Monmouth University poll earlier in February.

During his speech Saturday night, Sanders criticized President Donald Trump and ran through a slew of promises he’s proposed throughout his campaign.

He said he’s committed to making medicare free for everyone, eliminating tuition for public universities and cancelling all outstanding student loans. He also promised to raise the minimum wage and increase teacher salaries to at least $60,000 a year. His administration would implement strict gun control measures and address climate change by enacting the Green New Deal, he added.

“What our campaign is about is asking people to think outside of the box,” Sanders said. “We are trying to change a nation so that all of us understand we are in it together.”

Karl Jones, 32, of Yorktown was at the rally and said he plans to vote for Sanders. Jones is a pharmacist and noted he especially appreciates Sanders’ healthcare policy because he has witnessed people struggle to afford prescription drugs.

“It was just really hard seeing low-income people having to put back their prescription knowing that they needed them because they were too expensive,” Jones said.

Sanders also commented on the military during his speech, saying he would reduce spending to prevent cost overruns. He added that his administration would stay out of “endless wars.”

Saturday’s rally came as Sanders faces continuing questions about his progressive agenda and ability to defeat President Donald Trump in a general election. Sanders acknowledged the doubts during his speech, saying the “economic and political establishment” is getting nervous.

Sanders responded he can beat Trump with an exciting campaign that draws high turnout and speaks “to millions of working-class people who today are working two or three jobs.”

“Our job together is to reach out to those working people and say, ‘You know what, we do care about you. Join us and come into our movement,'" Sanders said.

Attendees at the rally included people who said they would benefit significantly from Sanders’ policies.

Karen Brown, who lives in Virginia Beach, currently earns less than $15 an hour taking notes for Tidewater Community College students with disabilities. Brown, 54, said Sanders’ proposal to increase the minimum wage would give her more security.

“A lot of people,” she said, “are figuring out each payday which bill can go on farther without being shut off and still manage to make their rent. That includes me.”

Robert Crawford, 30, of Virginia Beach is unemployed. He previously worked at Old Dominion University managing accounts and budget for student organizations. He said he was fired from the job because he suffers from anxiety and often missed work for mental health appointments.

Crawford said a labor union could have protected him and possibly prevented the firing. But he never had an opportunity to join a union. Sanders wants to now expand unions, he noted.

“It should definitely be easier to form a union,” he said. “That would have definitely helped me.”