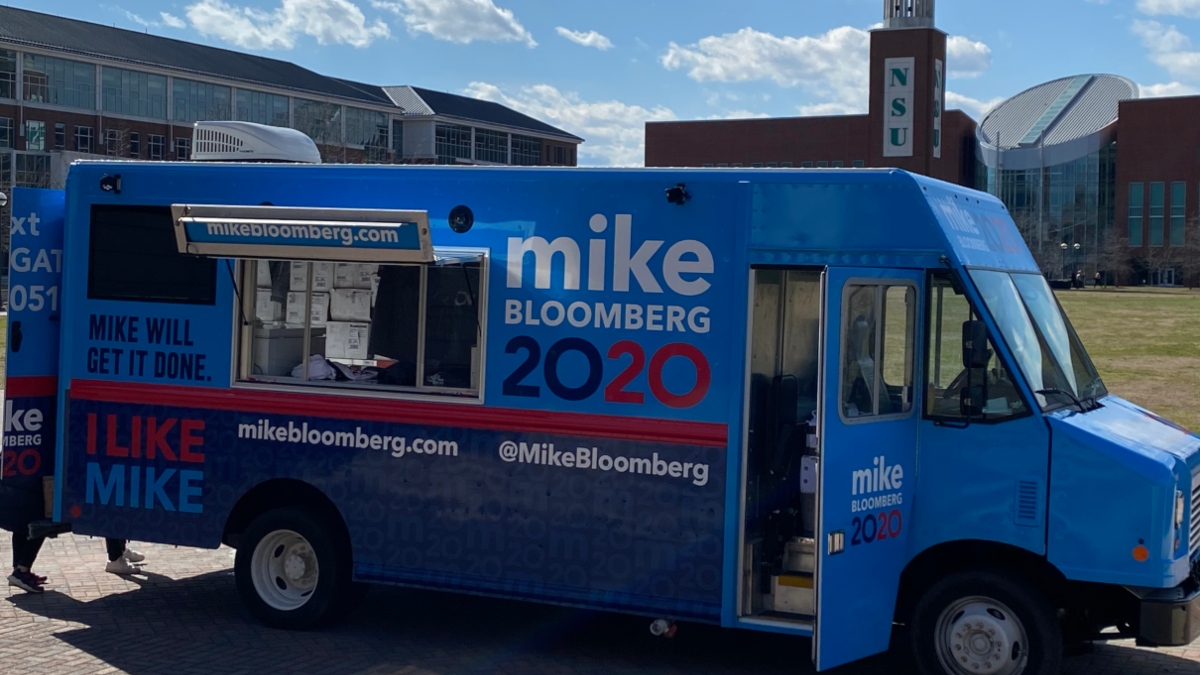 Mike Bloomberg volunteers made stops at Old Dominion and Norfolk State universities the Friday before Super Tuesday to hand out free t-shirts and hats.

A big, blue truck emblazoned with the words “I Like Mike" and "Vote Early" sat on Norfolk State University’s campus and got little more than a passing glance from students passing by.

Some students said they weren't really sure who Bloomberg was. Other said they liked Vermont Sen. Bernie Sanders more.

It was the most recent effort on his part to earn young voters’ support – specifically black voters.

Bloomberg made a pitch to young voters early in his campaign by paying social media influencers to post and make memes about him. He also earned endorsements from black elected officials in key Super Tuesday states, including Charlotte, N.C.’s Mayor Vi Lyles and Norfolk Mayor Kenny Alexander, who has supported Bloomberg since his campaign launched.

Bloomberg sent volunteers to Norfolk State to highlight some of his policy proposals that, the campaign contends, would benefit young black Americans, like increased funding for historically black colleges and universities (HBCUs).

"I'm not going to say I don't see a future, I just don't see a point in voting for him," said Leila Wilson, an NSU freshman. She hails from the Bronx and didn't like Bloomberg's mayoral policies.

"Me being from New York, I know what I've been through. He also implemented a lot of racial laws, such as stop and frisk, and I wasn't comfortable with that."

Under the controversial stop-and-frisk policy, law enforcement officers stopped, searched and detained people thought to be engaging in criminal activity.

Black and Latino residents were disproportionately targeted under the policy, often for weapons or other contraband they didn’t have.

That’s a weak spot for a Democratic primary campaign, said Jesse Richman, a political scientist at Old Dominion University. Bloomberg’s campaign made a stop there on Friday before heading to NSU.

“That’s clearly one of the ones that’s very dangerous for his campaign,” Richman said. “He’s attempting to address that in various ways, but the debate performance and some of the opposition research has made that more difficult.”

Bloomberg released a campaign statement apologizing for the policy, saying it was a mistake that he deeply regrets. He said he wasn’t aware how much damage it did to communities of color but has since learned more about the policy’s effects.

A spokesperson for Bloomberg’s campaign pointed to criminal justice reform and HBCU funding plans as policies that would benefit communities and color. Bloomberg also put forth his Greenwood Initiative to address economic inequities black Americans face.

Micah Thompson, a junior at NSU, said it's not racial issues that turned her off of Bloomberg. She didn't like that he's been accused of sexual harassment and forcing employees to sign non-disclosure agreements.

Instead, she plans to cast a vote for Sanders or Tom Steyer.