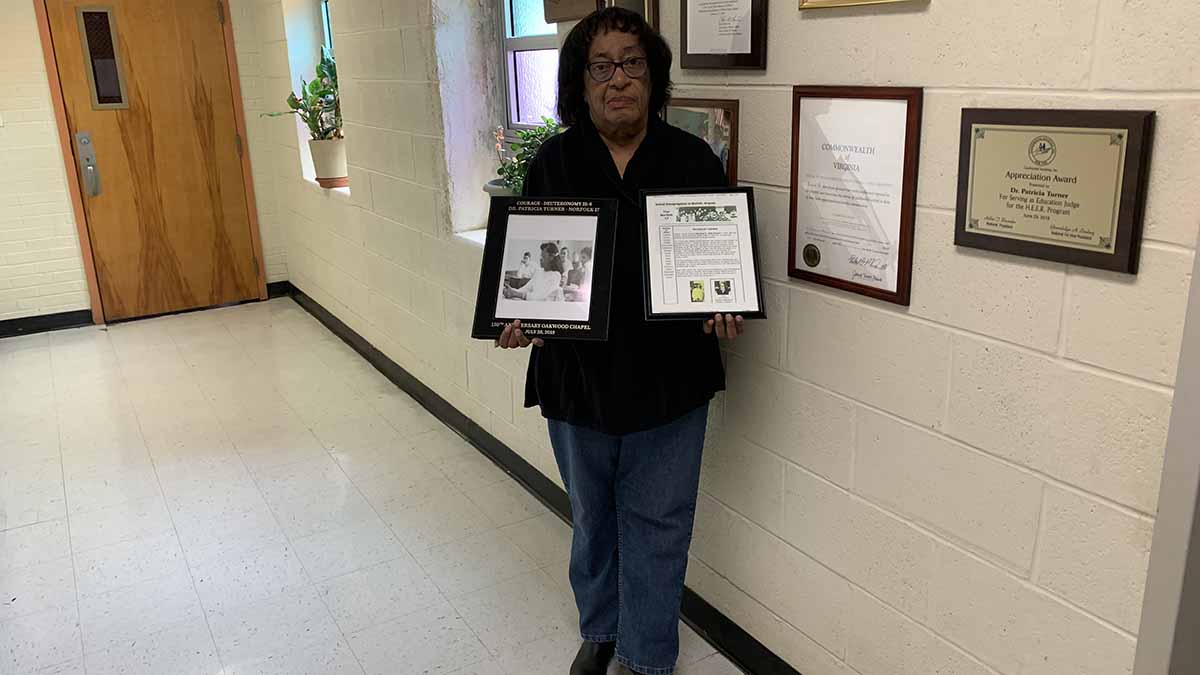 Patricia Turner, the director of Oakwood Chapel Academy, was one of the first 17 students to integrate Norfolk public schools in 1959.

On the morning of February 2, 1959, Patricia Turner and LaVera Forbes Brown had their day planned.

As the first African American children to attend the newly-integrated Norview Junior High, they and three other black students would meet each other at Turner’s house and then walk to school together holding hands. They would attend their classes, eat lunch and finish the day walking out of school together. They told each other “everything would be alright.”

“We didn’t want to walk alone in that area because we didn’t know what was going to happen to us if we were separated,” Brown said.

During their walk to school, white students in a passing school bus threw spitballs and yelled racial slurs at them. Once they were on the school campus, white parents pelted them with rocks and sticks. In school, students scattered away from them and said they had monkey tails. Teachers used gloves to handle their papers.

“Nobody wanted us there,” Turner said.

In a recent interview with WHRO, Turner and Brown recalled their experiences of integration in Norfolk's public schools. More than 60 years later, the violence and intense harassment they suffered throughout middle school and high school has left invisible scars. They’re fearful of opening up to people to this day.

After the United States Supreme Court ordered the desegregation of schools with its Brown v. Board of Education II ruling in 1955, Norfolk officials led by then-Mayor Kevin Duckworth initially resisted integration. The city temporarily shut down schools that were supposed to be integrated and even bulldozed the neighborhood of Atlantic City where black children were supposed to attend a nearby school with white children, said Cassandra Newby-Alexander, a dean and history professor at Norfolk State University.

When the city finally relented after multiple court rulings deemed the continuing segregation effort illegal, Turner and Brown were among the first 17 black children to integrate multiple schools. They became known as the “Norfolk 17.”

Turner and Brown said they initially agreed to attend an integrated school because they wanted to walk to school. The all-black schools were located farther from their homes and required taking a bus. Norview Jr. High, however, was a short walk away.

The women said they also did not realize the intense controversy surrounding integration. Turner’s father was a Navy submariner, and she spent much of her childhood playing with white children at Naval Station Norfolk.

“We were children,” Turner said. “Of course we lived in a segregated area, but we didn’t pay much attention to it.”

Before starting the school year, the Norfolk 17 received tutoring sessions at First Baptist Church Norfolk on Bute Street. The 11 girls and six boys became close friends and also learned how to respond to the harassment and abuse they would likely experience at their new schools. Don’t react if someone does something negative to you, they were told.

“We were trained as little soldiers,” Turner said. “Things that never happened to me before would be happening to me.”

Turner and Brown quickly realized why the preparation was necessary.

White students at Norview Junior High routinely directed racial slurs and threw pennies at them. Brown said their white peers didn’t want any money that was the color of the black students’ skin. Some of the white children with whom Turner played at the base now avoided her. And once they later attended the integrated Norview High School, Brown suffered a minor stab wound in her back.

But Turner said nothing was worse than when someone spat in her face.

“When someone spits on you and you’re not expecting it, it hurts as bad as someone hit you with a rock,” Turner said.

The entire experience left her feeling empty and alone.

“I became very withdrawn,” she said.“You don’t speak very much. You don’t even look away from what’s in front of you.”

Both women said they never considered returning to an all-black school. They wanted to complete “the job” and expand opportunities for other black students. Turner focused on her schoolwork to tune out the harassment.

But as they now look on back on integration, both women agree the experience has taken a emotional toll. Turner and Brown said they suffer from post-traumatic stress disorder. They have been unable to shed an armor that helped them withstand the harassment but also made them afraid and distrustful of people.

“I don’t socialize well,” Brown said, noting that she doesn’t like to share her personal feelings. “When I’m to myself, I feel like I’m in a cocoon.”

“It does a damage,” Turner added. “You never really develop into what maybe you would have been because of the things that happened to you.”

Still, Turner and Brown said integration has also had a positive life impact. The members of the Norfolk 17 all graduated high school, and several became teachers, including Turner who is now director of Oakwood Chapel Academy. The women added the experience taught them to love all people regardless of their skin color or background.

Today, Turner and Brown are among nine members of the Norfolk 17 who are still alive. They said they pray the world doesn’t forget them and what they did “for all people.”

“When we first met, my heart separated into 17 pieces,” Turner said. “Now eight of the pieces are gone. When the other nine are gone, I too, will be gone.”