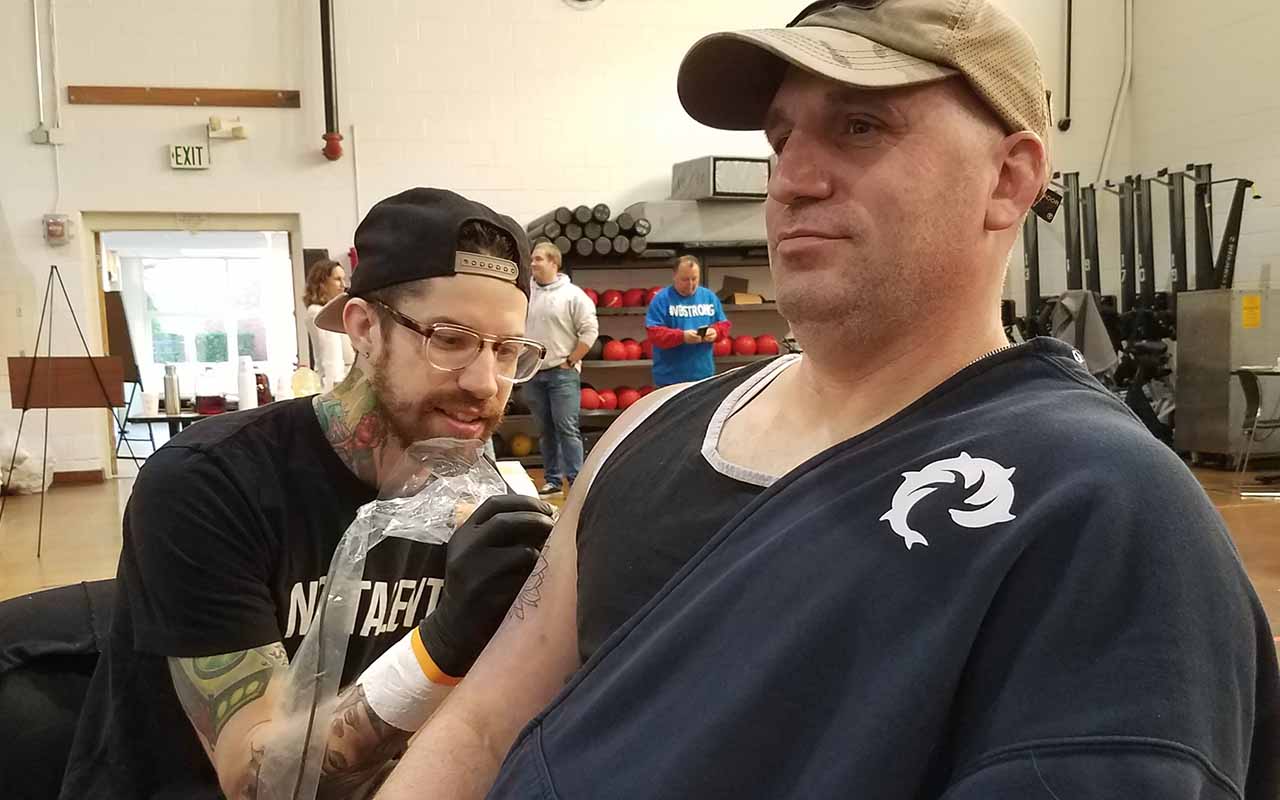 Artist Chris Jenkins of Richmond designed a tattoo for Nick Curtis, a first responder to the Virginia Beach mass shooting. It features sea turtles and a sunflower.

Healing Ink Provides A Different Kind Of Therapy Through Tattooing

Survivors of the mass shooting in Virginia Beach in May continue to recover after losing loved ones and experiencing the shock of violence.

There are various therapies designed to help people through this kind of traumatic event. A group of artists brought their own healing method to survivors -- in the form of needles and ink.
The gym at the Virginia Beach Police Department Training Academy was buzzing with the sound of tattoo needles on Saturday. Several tattoo stations with beds that look like exam tables were erected under bright portable lights around the gym. Tattooists wore rubber gloves as they created permanent art on the skin of people who came to receive them.

It was a way to mark living through the mass shooting that took place in Municipal Building 2 in Virginia Beach.

“With everything that happened in May, I’m just finding ways to cope,” said Heather Lindley. She was in Building 2 the day of the shooting. She hid behind a file cabinet to stay safe. “One of the ways to cope is getting a tattoo.”

Lindley’s tattoo is of a tye-dye rose, colored with her favorite colors -- pink, blue and purple. Her daughter’s middle name is Rose, and she sees the flower as a symbol of strength and resilience.

The tattoo artists are working for free with a project called Healing Ink. It’s part of the international group, Artists 4 Israel, which started 10 years ago with a project to beautify bomb shelters outside of Gaza with graffiti art.

Craig Dershowitz, the organization’s CEO, says more than 150 people have been tattooed through Healing Ink over the past 4 years.

“I've had people say to me when it's tattooed over their scars, ‘I would wake up every morning and the first thing I would see was that scar. And I'd be re-traumatized every, every morning. And now I see a beautiful piece of art and a reminder that people care for me,’” Dershowitz said.

The art might not always cover a scar. Survivors might be physically unscathed, but carry emotional injuries.

Healing Ink came to Virginia Beach at the invitation and sponsorship of the Community Relations Council of the United Jewish Federation of Tidewater.

Some of the participants had their first experience being tattooed, including Nick Curtis, who works for the Sheriff’s Department. He was one of the first responders to the shooting.

“I gave him some ideas and, you know, my family, we love going to the beach,” Curtis said. “I have two kids and so the sea turtles, and then my wife's favorite flowers are sunflower, so he put that in there. So it really just represents my family to me.”

Another first-timer was David Nieves, the Active Threat Coordinator for the Virginia Beach Police Department. He’s never had a tattoo in his more than 50 years on earth.

When he heard about Healing Ink coming to Virginia Beach, he decided to get a tattoo of David and Goliath right above his heart. He said it represents protecting himself and others from the Goliaths of the world.

Nieves wasn’t physically hurt during the mass shooting, but he lost friends. His son Matthew Nieves, also a police officer, was in Building 2 during the shooting.

The elder Nieves seems like a pretty tough guy, but getting tattooed was way more painful than he expected. He needed to ask his tattoo artist for a break.

“I hate any type of pain like that, it's just too much for me,” he laughed. “I wish I had my mouth guard. I'm messing up my teeth, I'm gritting down.”

His son Matthew received a tattoo that is half police badge and half Spartan helmet, with John 15:13 written across the bottom.

Artist Zach Hunter, who goes by “South Paw,” said all 14 people he’s tattooed for Healing Ink have been first-timers. He said it can be scary.

“It's one of the most intimate things you could possibly do between two people, I'm gonna cause you physical pain,” he said. “These are people that have been through some serious trauma, some serious damage in their lives, and all they want is some sort of peace. They just want some sort of a breath of fresh air.”

South Paw, who is from Jacksonville, North Carolina, can relate. He lost his right arm in an accident six years ago. It was devastating, but he learned to practice his art with his left hand. He first volunteered with Healing Ink last year in Tel Aviv.

Of the 14 tattoo artists donating their skills and time for this event, four traveled from Israel. Edit Ben Gida and her husband, Avihoo, previously worked with the organization in Tel Aviv as well.

Dor Dlugatch, also from Israel, said before he became a tattoo artist, he understood the therapeutic power of the work because he has ink himself. Now that he’s holding the needle, he said he still benefits from the process.

“I think it's a win, win situation, I think when you help someone, you're helping yourself,” Dlugatch said. “You feel better about yourself because you helped someone.”

One striking scene in the gym was a young man, Thomas Colson, as artist Erin Chance tattooed the unmistakable superman emblem in the center of his chest. Colson’s co-worker, Ned Carlstrom, sat nearby. They worked in Building 2 and survived the shooting together, coming face-to-face with the gunman three times. Carlstrom started calling Colson Superman after they made it out alive.

“He was ... I don't know how he was so calm that day. It was a little hectic and he was pretty calm in the face of all that chaos,” Carlstrom said of his friend.

The feelings of goodwill were palpable in the gym on Saturday. It’s not clear where Healing Ink take the needles next. CEO Craig Dershowitz says they don’t plan too far ahead.

“I hate to say this, unfortunately, there's so many opportunities in this country to do these events,” Dershowitz said.

Healing Ink donated 31 tattoos during their weekend in Virginia Beach.