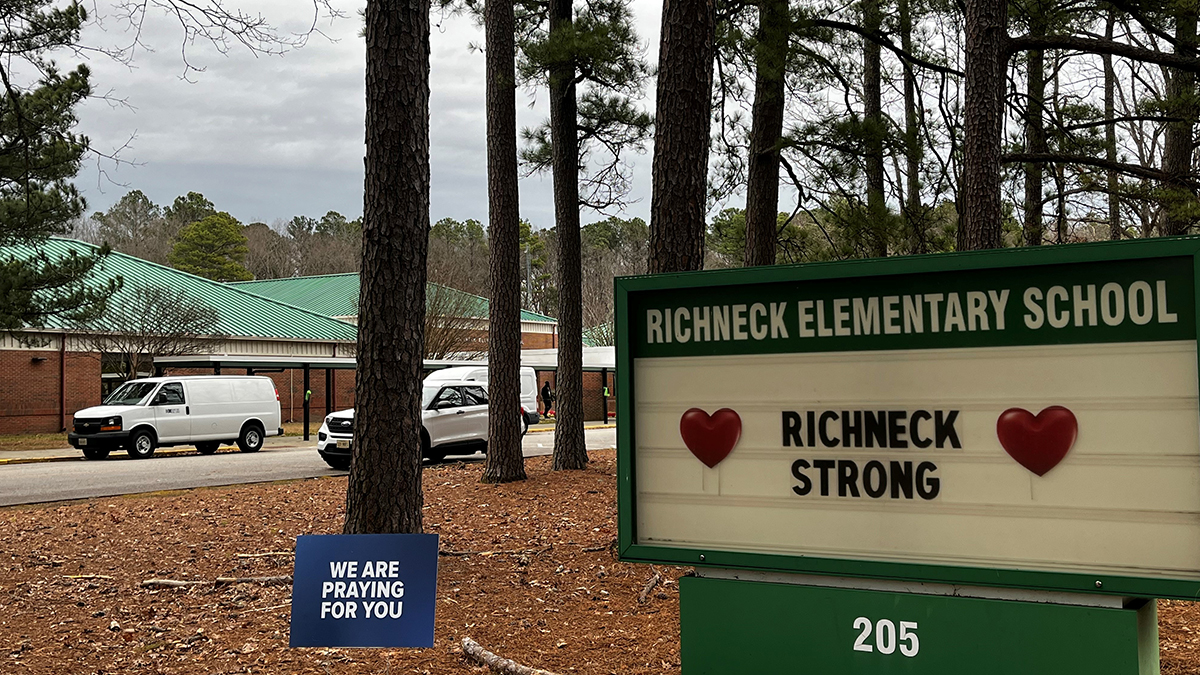 (Photo by Ryan Murphy) Signs outside of Richneck Elementary School, which has been closed for weeks after a student shot a first grade teacher in a classroom.

The Newport News School Board has voted 5-1 to fire Superintendent George Parker III.

Earlier Wednesday, an attorney for the elementary school teacher who was injured in the shooting said administrators had been warned the boy was armed in advance and announced plans for to sue the district on behalf of the teacher.

Teachers in the district have complained of failure by school administration to address violence and discipline in the schools, including dozens of comments at a school board meeting last week.

The Newport News teacher who was shot by a student earlier this month plans to sue the school district.

Diane Toscano, an attorney for 25-year-old Abby Zwerner, said school administrators were warned three different times on Jan. 6 that a 6-year-old student had a gun.

Toscano said the administrators repeatedly shrugged off the warnings and failed to address the safety threat.

“This tragedy was entirely preventable if the school administrators responsible for school safety had done their part and taken action when they had knowledge of imminent danger,” Toscano told the press Wednesday.

Toscano laid out new details over several minutes but refused to take questions from the press assembled at a press conference.

According to Toscano, Zwerner herself advised an administrator between 11:15 and 11:30 that morning that the 6-year-old threatened to beat up another child. Toscano said administrators did not call security or remove the student from the classroom.

Then, a different teacher told the same administrator around 12:30 that she had searched the 6-year-old student’s backpack and not found the weapon, so she believed he had put the gun in his pocket and taken it to recess.

“The administrator downplayed the report from the teacher and the possibility of a gun, saying, and I quote, ‘Well, he has little pockets,’” Toscano said.

A third teacher went to administrators shortly after 1 p.m. about another student who had come to them crying, saying the same 6-year-old had shown him the gun and threatened to shoot him if he told anyone.

Again, Toscano said the administrator did nothing.

“When a fourth employee who heard about the danger asked the administrator for permission to search the boy, he was denied. He was told to wait the situation out because the school day was almost over,” Toscano said.

Later that afternoon, the child pointed the gun at Zwerner while she was teaching her first-grade class. He fired once, hitting her in the hand and upper chest.

She was able to usher her other students out of the classroom before seeking medical attention. Nobody else was injured.

Police said when they arrived, another school employee was restraining the child on the ground in the classroom. The gun was on the floor.

Zwerner was hospitalized for more than a week, but is now recovering from her injuries at home. Toscano said Swerner is in between surgeries and physical therapy.

Newport News Public Schools spokeswoman Michelle Price said she could not comment on the allegations made by Toscano becaue the school district hasn't completed its own investigation.

Richneck principal Briana Foster Newton was removed from her post following the shooting, but remains employed by the district.

District officials put another former principal in charge of the school.

The Newport News School Board will hold a special meeting Wednesday to discuss Superintendent George Parker’s employment and potentially appoint an interim successor.

WHAT ABOUT THE 6-YEAR-OLD?

It’s still unclear what fate the child in this case will face.

Police initially confirmed that he had been put on a temporary detention order and was being evaluated by child psychologists at a medical facility.

But since that initial update on Jan. 9, they’ve refused to confirm anything about the 6-year-old’s whereabouts, treatment or condition.

Experts have told WHRO that it seems highly unlikely a child this young could be charged with a crime in a case like this.

Instead of prosecution, the child could receive ongoing mental or behavioral health services, his home situation could be evaluated and a long list of other measures may be taken, experts said.

Police have said how the child got the gun in the first place is a critical question for them to answer.

The gun belonged to the child’s mother and was purchased legally. But it’s a crime in Virginia to leave a gun unsecured around children.

Last week, the family of the child who shot Zwerner released a statement that said he suffers from “an acute disability” and that the gun had been secured.

The statement didn’t explain how a 6-year-old got the gun.

Police have not announced any charges against the child, his mother or anyone else in the case.