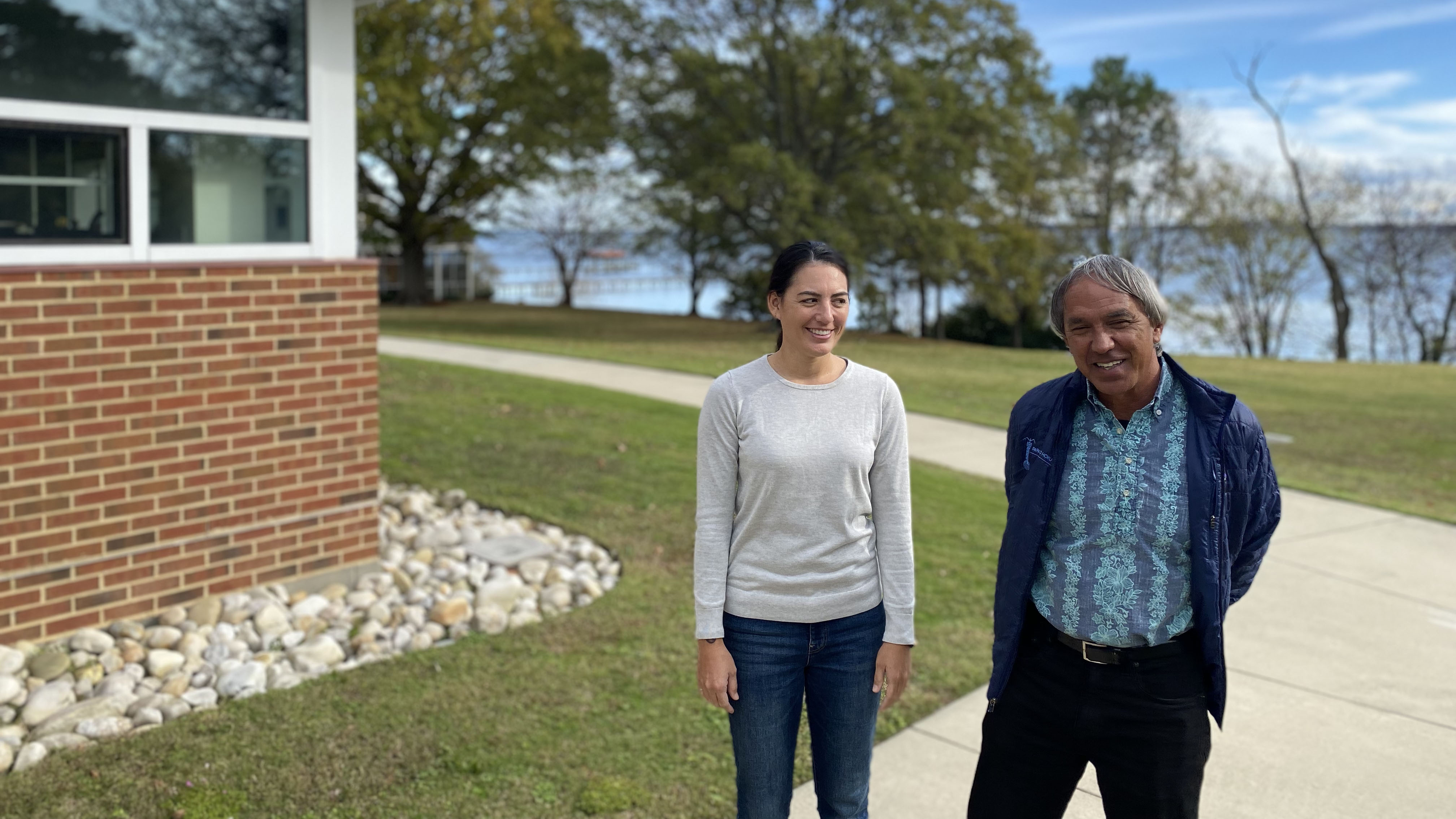 Photo by Katherine Hafner. Lehua Kamalu and Nainoa Thompson during a visit to the Virginia Institute of Marine Science at Gloucester Point on Wednesday, Nov. 16, 2022.

Kamalu, who’s 36, said she heard early on about the story of Hōkūleʻa, a canoe built and launched in the 1970s by the Polynesian Voyaging Society to revive the art and practice of traditional navigation.

“We certainly learned about the heroes and the people who were actually doing the work to bring it back to life,” she said.

But Thompson, who described himself as “really old,” said he didn’t learn much of anything in school about that heritage.

“When I graduated high school, I knew nothing about, where are my ancestors? Where did they come from?” he said. “How did they get to the single most isolated island archipelago in the world, crossing essentially 2,200 miles of open ocean?”

Eventually both became experts in Polynesian navigation and part of the growing effort to teach it.

The practice honors the way people traveled thousands of miles across the Pacific Ocean to Hawaii as early as 400 AD, before modern technology and materials.

Now Thompson and Kamalu are spreading their knowledge and associated environmental values with students on the opposite coast of the United States.

The visit kicked off a new role Thompson will take on called the Scholar in Ocean Residency.

Havens, whose family has a long connection with canoeing, was with a group of Virginia friends partaking in an outrigger canoe race between two Hawaiian islands in the early 1990s.

A local suggested they get in touch with a local expert to ensure they made it across the open ocean waters, and Thompson ended up steering for them. Over the years they stayed in touch.

In 2016, Havens coordinated with Thompson, Kamalu and others with the Polynesian Voyaging Society to make a stop in the Chesapeake Bay during one of their worldwide voyages.

The society has protocol to always request permission from local indigenous people before they arrive on their land.

Havens said it was emotional to watch when they did so in Yorktown with tribes around the Chesapeake, such as the Nansemond Indian Nation.

It got him thinking about ways that VIMS could build upon engagements with local tribes and “the concept of melding indigenous wisdom with scientific understanding” in the coastal and marine science fields.

Ashley Atkins Spivey, a member of the Pamunkey Tribal Council, said the tribe is excited to work with Thompson.

“It's not just learning about what we're facing and how we need to face it but learning from our ancestors how to face it,” Spivey said in a statement. “Education has to be a key component because if we don't know where these practices came from, in our relationship to the water and to the Bay, it's not going to have the foundation it needs.”

Most of Thompson’s residency won’t happen on campus. It’ll be from the ocean.

He and the voyaging society are gearing up for a three-year, 40,000-mile circumnavigation of the Pacific Ocean from Alaska to Russia — the long way around — aboard the Hōkūleʻa, a double-hulled voyaging canoe.

Kamalu was the first woman to serve as lead captain and navigator of the Hōkūleʻa on a traditional long-distance ocean crossing — 2,500 miles on the ancestral “sea road” between Hawaii and Tahiti.

She said their methods went without appreciation for years before being revived in recent decades. Those include paying close attention to the stars, sky, weather, waves, animals and more.

Some people “did not acknowledge that maybe there are other ways to find your way across the ocean that didn’t involve technologies and simply involved humans being really attentive to what's going on in nature around them,” she said.

Thompson said he’s no academic. Through the new VIMS position, he hopes to share messages of listening to and taking care of the earth.

He and Havens also see the role as the start of a long-term partnership: VIMS can be an East Coast anchor for the voyages, while Thompson can serve as a sort of ambassador encouraging youth around the world to pursue their interest in ocean sciences.

“We are concerned about the future of our children, that that future will be clean, it’ll be healthy, it’ll be safe,” Thompson said. “We’re trying to do something responsible through community engagement and essentially education.”