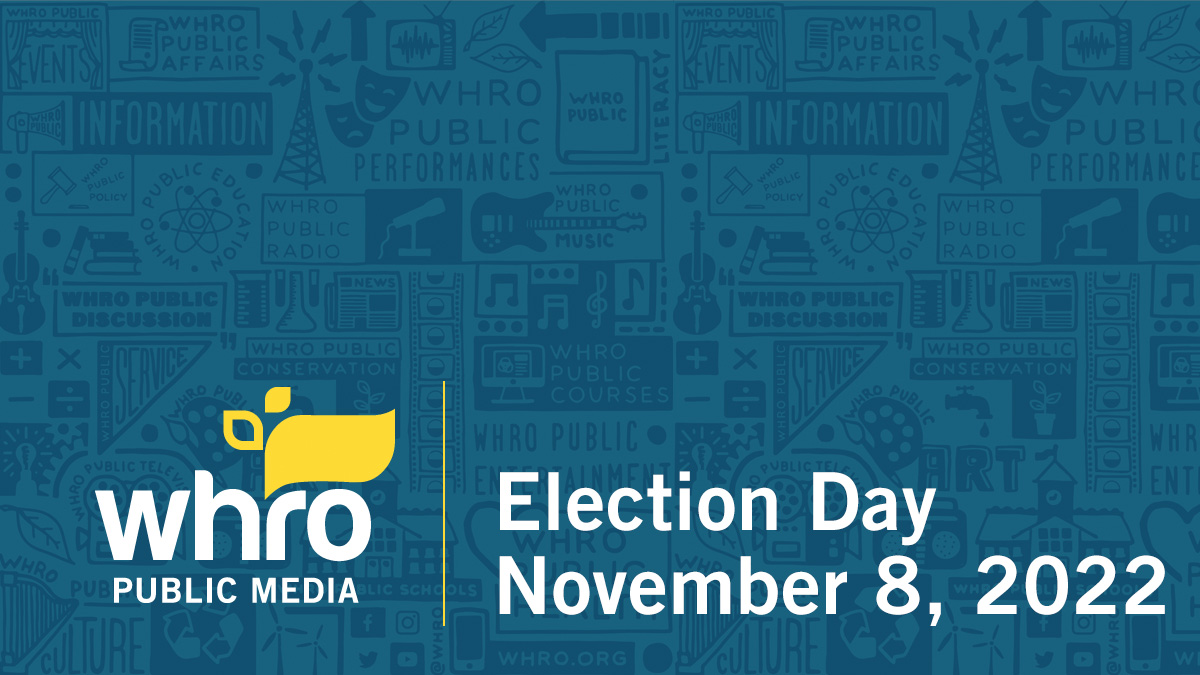 Live updates from the polls: Hampton Roads is key to determining a U.S. House majority

WHRO will carry live results coverage starting at 8 p.m on WHRV FM 89.5. It can also be streamed online.

Polls close at 7 p.m., and there is typically a surge of voters in the evening as voters finish their workdays.

Early in the day, Beals said some localities were having issues with electronic poll books.

That’s how poll workers retrieve voter information. There are paper poll books that those localities could use in place of the electronic ones.

By late afternoon, Beals said some of the places that had to move to paper books managed to go back to the electronic version. Other places were working with paper poll books all day.

Beals cautioned against declaring winners and losers too soon after the polls close.

For the first time, Virginia will record absentee ballots based on where the voter lives.

The state previously recorded those ballots in a separate category regardless of precinct.

“Hopefully this will help folks understand where we are in the progress of reporting results tonight,” she said at a briefing. “So that if you look at a page and you see only one precinct outstanding, or only two precincts outstanding, this is going to give you a clearer picture that maybe those are all those absentee ballots that havent been reported so I shouldn't necessarily look at this and think the outcome I see is the end of the story for this race tonight.”

Another change that could delay final results is Virginia’s first year of same-day voter registration.

Beals said right now, there’s no way to know how many people registered to vote today at their polling place.=

“Those folks who vote same-day voter registration are voting a provisional ballot, so all of those ballots are going to go back to the registrar’s office where they will be considered and then voted on by the electoral board at the provisional ballot meeting,” she said.

Provisional ballots require voters to provide local elections officials with additional verification, usually in relation to a person’s identification or to confirm

Provisional ballots become especially important in close races. If there are enough waiting for certification, candidates might wait to concede or declare victory.

That could be important in the 2nd congressional district, where Elaine Luria and Jen Kiggans are tied in most results projections.

Patrice Ward talks about why she's voting this year

Cities across the region have local elections.
In Portsmouth, voters were motivated to cast votes in city council races.
Patrice Ward said she is "Portsmouth through and through."
She was motivated on Election Day to pick candidates in the city council race.
"We've been going through some challenges," she told WHRO.
In the last few years, Portsmouth has had major upheaval in key city leadership positions including the police chief positon and city manager. Most recently, former city manager Tonya Chapman filed a lawsuit against the city claiming a breach of ticket.
Patrice said she's frustrated with the way local leaders treat each other and how they approach their elected positions.
"It's the peoples' city, it's not your city," she said.
She's proud of things Portsmouth has done -- like securing a casino and dedicated a street to hometown celebrity Missy Elliott - but doesn't want "our troubles (to) cloud that. It's time for us to rise."

Walter Carter has lived in Portsmouth since the 1950s. He and his wife, Thelma Carter, vote every year.
They're paying special attention to city council races this year.
"Portsmouth city government needs a whole new outlook as to where theyre going to take this city and this city needs to go a long way and this city has been brought back a long way," he said. "We need to elect or vote for the people that are really going to do something for this city. We know who has torn this city all to pieces and we need to bring it back to where it needs to be."

Close to a million Virginians have already voted early, according to the Virginia Public Access Project. Most of those ballots came from congressional District 1, which includes the Middle Peninsula and is currently represented by Republican Rep. Robb Wittman.

It's expected Wittman will keep his seat, but the 2nd District is one of the most competitive races in the country.

The Luria-Kiggans competition is considered one of the most competitive in the country because they're running to represent Virginia Beach, a city that regularly elects Democrats and Republicans to state and federal offices. Political analysts consider that a swing district, which makes it difficult to predict results.

"Luria has been working to try to paint Kiggins as extreme. This has been the Democratic playbook in a lot of different races," he told WHRO. "And Kiggins's been trying ... try to make the claim that Luria is extreme out of step - too close to Nancy Pelosi. So you see these kinds of efforts to tie the local candidate to unpopular national leadership."

Virginia Beach will be electing local school board and city council representatives under new districts. In addition to city and town councils there are several places electing mayors:

Catch up on election coverage from WHRO News:

Virginia elections office finds another 149,000 voter registration records affected by IT error
The Virginia Department of Elections said the problem is “directly related” to an IT error that caused a separate batch of 107,000 records last month to sit in limbo from May through September. Read more

Hampton Roads may help decide control of the House of Representatives. And the race couldn’t be closer.
Virginia’s "swingy" Second Congressional District may be the seat that tips the balance of power after the midterm elections. Read more.