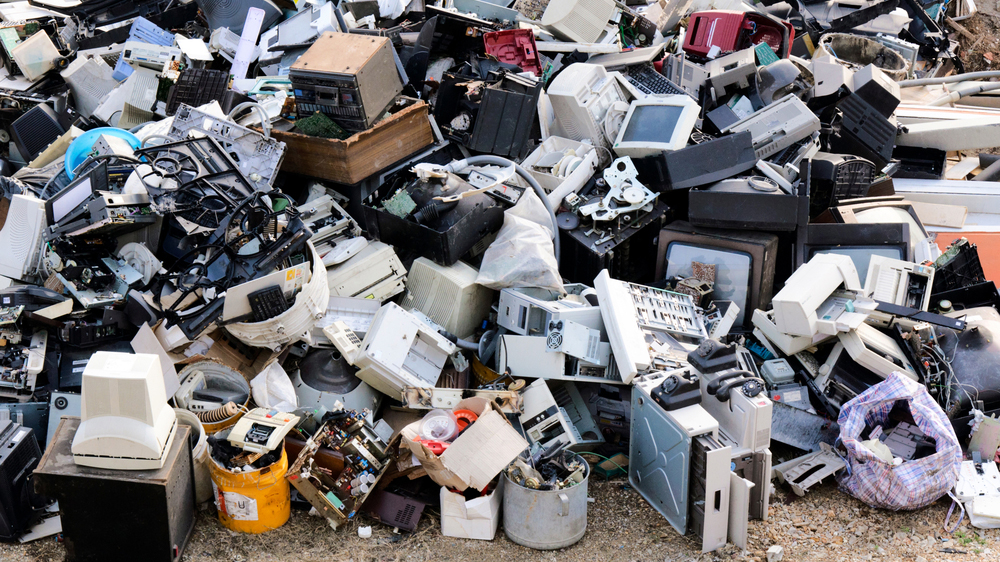 Photo via Shutterstock. A pile of electronic waste.

Electronic waste is a tricky issue.

Items like computers or cell phones can’t be tossed in with regular recycling. Instead they often end up in the landfill, even though they contain valuable parts.

“Unfortunately these days, most electronics are built for obsolescence,” said Tressa Preston, director of administration for the Southeastern Public Service Authority, or SPSA, which manages waste for south Hampton Roads.

“Your televisions and your computers and your cell phones, they’re designed so that in a few years, you don’t rebuild them or get them fixed. You replace them.”

Several of the cities and counties that SPSA serves started asking last year about ways to better handle e-waste, Preston said. Some already have options for residents, but they can be hard to manage or unreliable.

One issue is that electronic waste is heavy and therefore expensive to transport.

SPSA now has a proposal that will go to its board for approval next month.

The program would allow residents to drop off approved forms of e-waste at specific events or SPSA facilities.

The items would then go to a vendor to take out reusable parts and dispose of the rest.

“The specific advantage for our region is that they wouldn’t be going into the regional landfill,” Preston said. “We want to be able to preserve that space as much as possible.”

SPSA is already working to expand its Suffolk landfill, which it estimates will run out of room in about five years.

The authority expects to pay about $26,000 to buy trailers to accommodate and move the e-waste materials, Preston said.

It plans to recoup that investment by charging municipalities $15 each time someone makes a dropoff with up to five items.

The localities it works with are Chesapeake, Suffolk, Norfolk, Portsmouth, Virginia Beach, Franklin and Isle of Wight and Southampton counties.

SPSA will look for a vendor but will not use a traditional contract requiring a request for proposals.

Neither party will pay each other, Preston said. Instead, the goal for the vendor is to extract whatever’s profitable inside the e-waste.

SPSA will hold a public hearing on the e-waste proposal Dec. 14. Preston said it would start on the first of the new year if approved.