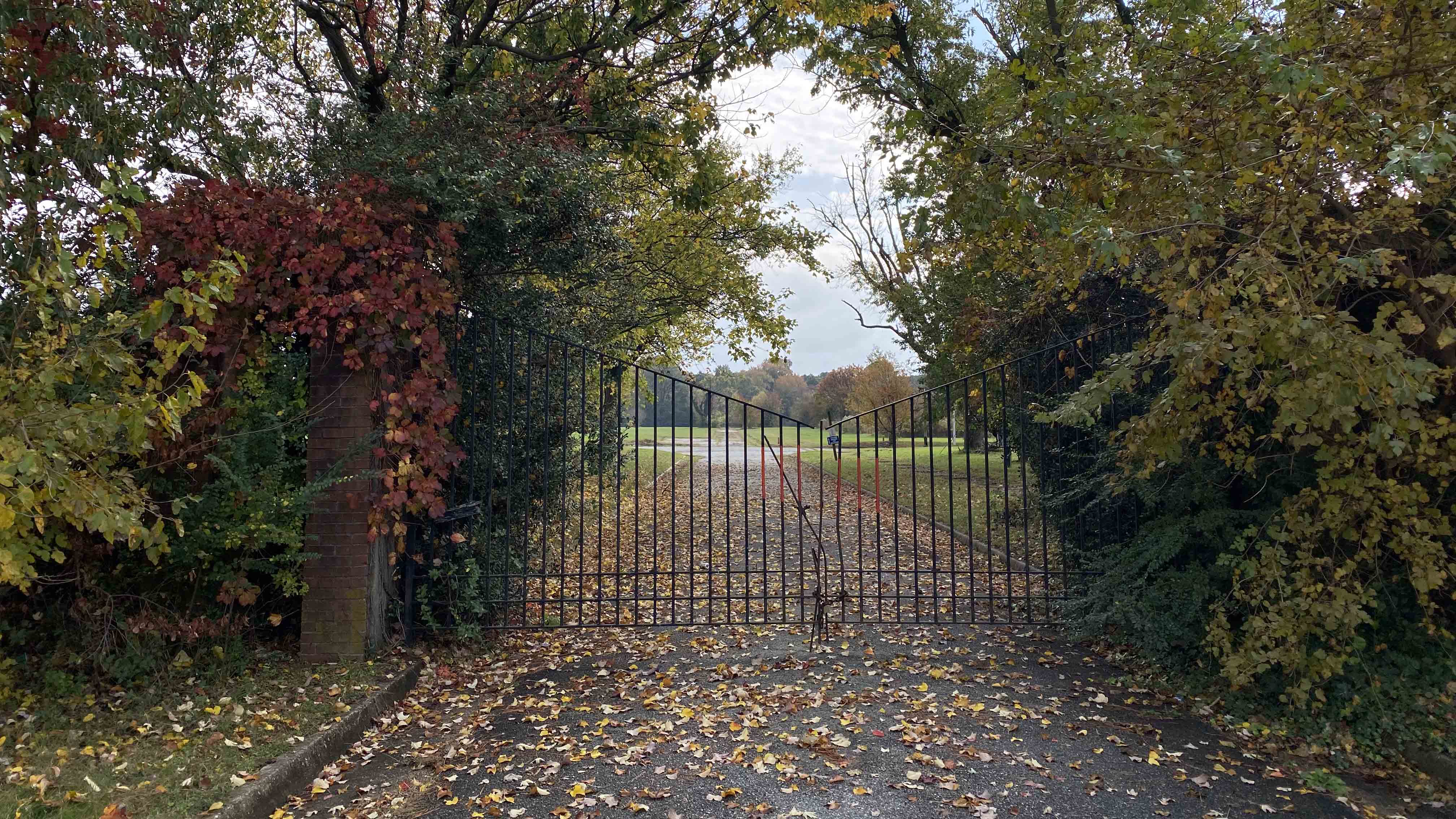 Photo by Katherine Hafner. The front gate to the site of the former Virginia School for the Deaf, Blind and Multi-Disabled in Hampton, as seen November 2022.

An impassioned group of residents in Hampton’s Wythe neighborhood is pushing back against a developer’s proposal to turn a massive former school site into industrial warehouses.

Kansas-based NorthPoint wants to spend at least $93 million to build what it calls the Phenix Commerce Center on the land that was home to the Virginia School for the Deaf, Blind and Multi-Disabled. The school closed and moved to Staunton nearly 15 years ago.

But many residents are fighting the project, saying it would threaten both the character and safety of the majority-Black community.

They want to see a more community-focused use of the property, such as affordable housing, a cultural center, a grocery store or public green space.

“Our problem is that we’ve never really had a chance to come to the table to discuss what we would like to see,” said Rev. John Kenney of Third Baptist Church, which is less than a mile from the site. “It’s all houses. So there’s no way that this 540,000-square-foot warehouse is going to be compatible to the neighborhood.”

The Virginia chapter of the NAACP has written concerns to city officials, as has a Christopher Newport University professor.

The Hampton’s Economic Development Authority, which owns most of the land, however, points to the jobs and future economic activity the project could create.

“We really do think, all things considered, that this is far and away the highest and best use,” said economic development director Chuck Rigney. “It will enhance the repositioning the Pembroke Avenue area with new investments of a higher caliber.”

Before the commerce center can move forward, the land must be rezoned from residential to light industrial.

The Planning Commission recently voted against that. City Council members will make the final decision this Wednesday.

The community’s opposition to the project is partly rooted in a shared history between the people and the school.

When the facility opened in 1909, it was the Virginia School for Colored Deaf and Blind Children serving Black children who weren’t allowed into the first location in Staunton. The land for it was donated by Black landowners, according to Daily Press archives.

The school integrated in 1964. State officials closed it in 2008 to consolidate with the Staunton school.

Aaron Weaver tears up talking about the community’s relationship with the school, which included field trips and going to dances or basketball games there.

“That school is in our blood,” said Weaver, who’s spent his 37 years in the neighborhood and attended Hampton High School, followed by Hampton University.

A 2013 city plan for the area noted that connection, adding that the school was eligible for the National Register of Historic Places.

“During its operation, residents and students considered one another family,” officials wrote. “There were strong bonds between students and neighbors for taking care of one another in a protected, safe environment; this is still evident today.”

Weaver and his mother, Joan Weaver, were among a group of residents who met recently at Third Baptist Church to discuss their fight against the rezoning.

Aaron Weaver, who previously worked as a city services dispatcher, has followed happenings involving the property for over a decade. Proposals popped up then receded over the years, including a mixed-use housing complex.

Weaver keeps a running file of documents related to the site and communications with the city about it.

“We are very specific in our knowledge of what we’re talking about,” he said.

The first the residents heard of the warehouse proposal was this spring, when NorthPoint started hosting community informational meetings. Weaver said he felt the developer tried to solicit support more than truly hear feedback.

The group said their concerns include pollution, traffic and wear and tear on roads that already need repairs.

They also think the land could better be used to improve existing problems, such as a lack of affordable housing.

The warehouses could instead be built just across Interstate 664 at the Copeland Industrial Park already marked for that purpose, they added.

The feelings are compounded by what people say is a historic lack of investment in the area.

Joan Weaver and Nancy Williams each moved there in the 1960s when the swath of Wythe was still a white neighborhood.

“Within one year, the community changed and it was totally brown,” said Williams, who’s 73.

Once that happened, “money stopped coming,” Joan Weaver said. “We didn’t just get impoverished overnight. But yet we are here to let them know we stand strong.”

The former school site includes nearly 75 acres off Aberdeen and Shell roads. Over the years, parts of it changed hands.

Under its proposal, NorthPoint would buy both parcels, except about 11 acres the city would preserve for a community purpose such as a park or memorial for the former school.

Stormwater management ponds to ease flooding would flank the western side along Aberdeen Road, while the eastern side facing houses would be buffered by trees and a sound wall.

Rigney said he wouldn’t back the proposal if he didn’t believe NorthPoint would address the concerns that residents have brought forward.

Legally binding stipulations attached to the project, called proffers, include limiting the wall height viewed from adjoining homes and limiting entry to the commerce center to the non-neighborhood side.

The appeal of the Shell Road location is not only the size but its proximity to the Port of Virginia, Newport News Shipbuilding and other local industry.

“Providing space for our critical companies in the DOD industry and the port, during this rocky time in our economy, is also important,” Rigney said. “They’ve got to have places to put product.”

He noted there’s currently a high demand and little availability for warehouse space in Hampton Roads.

The city’s also drawn by the prospect of over $1 million in annual taxes.

“I just hope that the opportunity will be there to prove that in the years to come, that it was the right decision to make,” Rigney said.

NorthPoint did not respond to WHRO’s requests for comment for this story.

The vocal group of residents against the warehouse project showed up in force at last month’s Planning Commission meeting and plan to do so at the council meeting this week.

They’re skeptical that proffers from NorthPoint will fully address their qualms.

The backyard of longtime resident 67-year-old Ursula Barkers is directly behind the site. She’s worried the sound wall won’t get rid of loud sounds and pollution from trucks that could disturb her quality of life.

But even more so, the group is passionate about using the land for a purpose they feel better serves the people who live there.

“It is a modest neighborhood of hard-working individuals,” Barkers said. “I’m afraid (these) plans will adversely impact our neighborhood forever.”