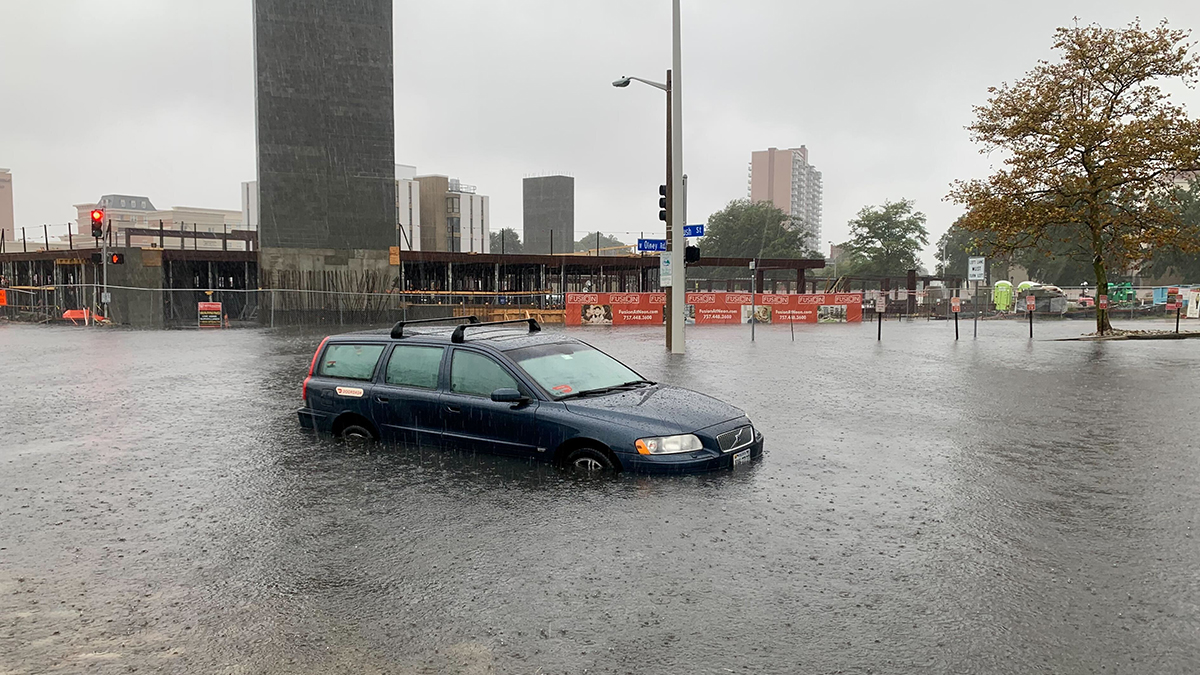 Photo by Mechelle Hankerson. An abandoned Volvo sits partially submerged at an intersection in Norfolk known for flooding Friday afternoon.

For additional closures, safety information and the most up-to-date weather information, listen to WHRO News on 89.5 FM.

Weather officials say Hampton Roads will see a good amount of tidal flooding Monday afternoon — but the forecasts have shifted from dire to moderate.

The National Weather Service in Wakefield had said the region could see the nastiest tidal flooding in a decade, rivaling surge in Norfolk during Hurricane Sandy in 2012.

But the winds have shifted, literally, to become more north-northwest.

The service said early Monday afternoon that tides are now expected to be 1 to 2 feet lower than previously thought. Tide gauges show levels during high tide around 4 p.m. could reach about 5.6 feet.

Much of Hampton Roads is under a wind advisory until 8 p.m. Monday and a coastal flood warning through midnight Wednesday. Norfolk, Portsmouth, Chesapeake, Hampton and Poquoson are most at risk. Wind gusts could reach up to 50 miles per hour.

Under the previous estimates, weather officials said there could be up to 3 feet of water above ground level in low-lying areas. They predicted many roads will be impassable and some neighborhoods isolated. Some areas may need to evacuate.

Ian dissipated over Virginia over the weekend as a post-tropical cyclone. But the remnants of the storm are mixing with low pressure off the coast, causing the effects to linger.

GOOD NEWS! Due to a combination of winds becoming more north-northwest, tides are expected to be at least 1 to 2 ft lower this afternoon than was forecast yesterday. Water levels are now mainly expected to reach up to moderate flood levels at high tide. https://t.co/KkU1GilG7n pic.twitter.com/VwrZIvoHk7

Most of Hampton Roads has shut down in anticipation of the flooding, closing schools and city offices.

Ian made landfall for a second time near Georgetown, South Carolina around 2 p.m. Friday as a Category 1 hurricane.

The statewide emergency orders in Virginia and North Carolina suspend certain regulations and laws to allow for faster storm preparation.

In both states, it also activates price gouging protections on items like water, food, batteries, tree removal services and other emergency-related needs.

The Virginia Department of Transportation said the Interstate 64 Express Lanes in Norfolk may have intermittent closures.

The Jamestown-Scotland Ferry may be suspended because of high tides and wind. People can call the ferry hotline at 1-800-VA-FERRY for status updates.

The causeway to Chincoteague on the Eastern Shore may also experience closures as needed.

Officials ask residents to limit their travel on the roads. The primary cause of flood-related deaths happen from people driving into floodwaters or walking near them.

A dozen inches of water can move most cars, while half that is enough to knock an adult off their feet.

Residents should also beware of sewage, insects, chemicals, debris and more that could be present in floodwater.